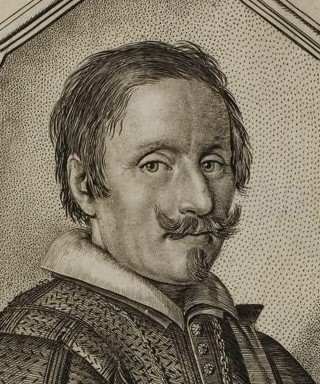 Giovanni Baglione was an Italian Late Mannerist and Early Baroque painter and art historian. He is best remembered for his acrimonious and damaging involvement with the slightly younger artist Caravaggio and his important collection of biographies of the other artists working in Rome in his lifetime, although there are many works of his in Roman churches and galleries and elsewhere.

He was born and died in Rome, but from his own account came from a noble family of Perugia. A pupil of the obscure Florentine artist working in Rome, Francesco Morelli (not to be confused with the later French-Italian engraver Francesco Morelli), he worked mainly in Rome, initially with a late-Mannerist style influenced by Giuseppe Cesari (or the "Cavaliere d'Arpino"). After an intermezzo Caravaggesco when he was heavily influenced by the young Caravaggio in the early years of the new century, and a Bolognese-influenced phase in the 1610s, Baglione's final style became more generalized and typical of Roman Early Baroque painters such as Guercino, though always reflecting his training in the Central Italian tradition of disegno, the absence of which he criticized in the Caravaggisti. To Rudolf Wittkower, his style "vacillated between progressive trends, without absorbing them fully".

He spent 1621–1622 in Mantua as the court artist of Duke Ferdinando Gonzaga, where the exposure to the fabulous Gonzaga collection of Venetian paintings influenced his style. Otherwise he remained in Rome, where he was long successful in attracting commissions from the Papal court and aristocracy. His paintings have been described by the art historian Steven F. Ostrow as "extraordinarily uneven, at best, competent, and his work pales in comparison with that of many of the contemporary artists he emulated", while his "chalk and pen and ink drawings reveal a force and lyricism rarely found in his paintings". The quality of his work declined sharply in the 1630s, by which time he was in his late sixties.

He had a successful career, receiving a Papal knighthood in the Supreme Order of Christ (the highest of the Papal orders) in 1606, and his long involvement with Rome's Accademia di San Luca and his biographies reveal "an artist obsessed with status". He was a member of the Accademia from 1593 until his death, and three times President. Apart from the regular later title of "first historian of the Roman Baroque", in his lifetime he was also nicknamed Il Sordo del Barozzo as he suffered from deafness. He died in Rome on 30 December 1643 at the age of 77.

Saint John The Baptist In The Wilderness (1610)

The Dream Of Saint Joseph

Woman Walking to the Right