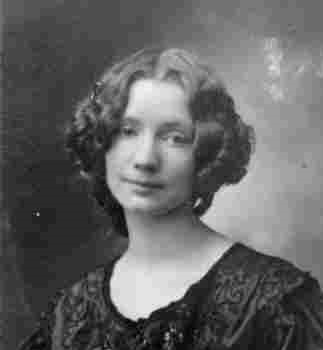 Gerda Marie Fredrikke Wegener was a Danish illustrator and painter. Wegener is known for her fashion illustrations and later her paintings that pushed the boundaries of gender and love of her time. These works were classified as Lesbian erotica at times and many were inspired by her partner, the transgender woman Lili Elbe. Wegener employed these works in the styles of Art Nouveau and later Art Deco.

Gottlieb was born in Hammelev, Denmark to Justine (née Østerberg) and Emil Gottlieb, a vicar in the Lutheran church. Her father had Huguenot ancestry and her family was conservative. She had three siblings but was the only child to live to adulthood. She enjoyed art at a young age and began training. Her family moved to Hobro and later she moved to Copenhagen to pursue her education at the Royal Danish Academy of Fine Arts.

Wegener's work was often of confident and elegant women performing a variety of activities in either a Renaissance inspired style, Art Nouveau or Art Deco style. The images tended to show women posing or participating in artistic endeavors such as theatre, literature, and dance. Later on in France, Wegener created work showing women displaying seductive power or engaging in sexual activities. This risqué art was considered "lesbian erotica" and published in illicit art books.

Along with shifting how women are represented in art, Wegener also challenged gender and sex identity roles in her work. She did this in small ways, such as drawing men with slender bodies and soft lines, or by painting her transgender partner, Lili Elbe.

Gottlieb's work was shown in the Charlottenborg Art Gallery in 1904, but she gained little attention for her artwork. Her career as an artist began to mobilize after graduating from the Academy in 1907 and 1908 when she made appearances in the Politiken newspaper. She then was the center of a controversy called the Peasant Painter Dispute after one of her 1906 works, Portrait of Ellen von Kohl, was rejected from the exhibitions of Den frie Udstilling and Charlottenborg due to the style of the piece. This piece caused concerns of Italian Renaissance plagiarism and split opinions of it showing a weak individual or an elegant beautiful woman. Gottlieb never got involved in the debate. The portrait was displayed by the Winkel and Magnussen's art dealership and received attention that boosted her career as an artist.

Wegener won two sketching competitions in the Politiken newspaper. One was in 1908 and another in 1909 for best capturing "Copenhangen Women" and then "The figures of the Street." Wegener was known for her illustrations created for advertisements and was also a portrait painter. She did art in Paris, but was less successful in Denmark, where people found her work very different and strange as it often portrayed her husband as a woman.

In 1912, Wegener and her partner, Lili Elbe, moved to Paris, France. In Paris, Wegener began to push the boundaries in her artwork by creating more provocative paintings of women engaged in sexual activities and seductive positions. She often painted herself with Lili Elbe or Lili alone either portrayed as a man or a woman. Her work gained her attention and she was able to throw parties and experience notorious fame. Along with this, her work in the fashion industry took off as she illustrated for magazines such as Fantasio, Vogue, and La Vie Parisienne. Her illustrations were used in a wide range of platforms from beauty advertisements to political anti-German images in the Le Matin and the La Baïonnette during World War II. In 1925, she won two gold medals and a bronze one for her artwork in competition at the very famous 1925 World Fair in Paris. She was exhibited in the Salon des Humoristes, the Salon des Indépendants, and the Salon d’Automne. She befriended Ulla Poulsen (1905–2001), a Danish ballerina, who became a frequent model for her paintings. She and her spouse were also close friends with artist Rudolph Tegner and his wife Elna.

She met fellow artist Lili Elbe – then known as Einar Wegener – at art school. They married in 1904, when Gerda was 18 and Lili was 22. They travelled through Italy and France, eventually settling in Paris in 1912. The couple immersed themselves in the Bohemian lifestyle of the time, befriending many artists, dancers and other figures from the artistic world, often attending carnivals and other public festivals.

During this time Elbe began to wear female clothing, and adopted her female name and persona, becoming Gerda Wegener's favourite model, in paintings of beautiful women with haunting almond-shaped eyes dressed in chic fashions. In 1913, the art world was shocked when they learned that the model who had inspired her depictions of petite femmes fatales was in fact her husband.

As Elbe adopted her female identity, Gerda Wegener commonly introduced her as Einar Wegener's cousin when she was dressed in female attire. In 1930 Elbe underwent one of the first sex reassignment surgeries. As Danish law at the time did not recognize marriage between two women, their marriage was annulled in October 1930 by King Christian X. Elbe died in 1931 from complications of the surgery.

In 1931, Wegener married Italian officer, aviator, and diplomat Major Fernando Porta and moved with him to Morocco. She divorced him in 1936 and returned to Denmark in 1938 for unknown reasons. Wegener held her last exhibition in 1939, but by this time, her artwork was out of style as the simpler Functionalism had become more popular in the 1930s. She had no children, lived by herself in relative obscurity, and began to drink heavily. She faced financial instability and kept an income by selling hand-painted postcards.

She died on 28 July 1940, in Frederiksberg, Denmark, shortly after Nazi Germany invaded the country. Her small estate was auctioned, and there was only a small obituary printed in the local paper. 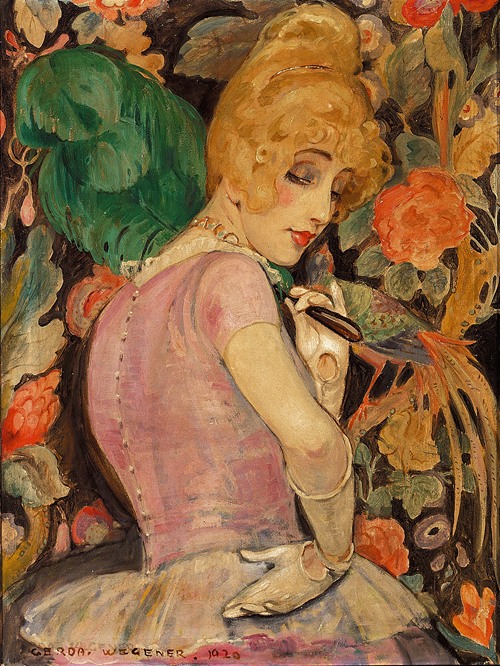 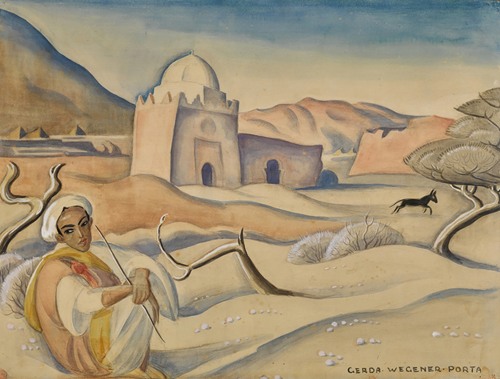 Shepherd in the Atlas Mountains 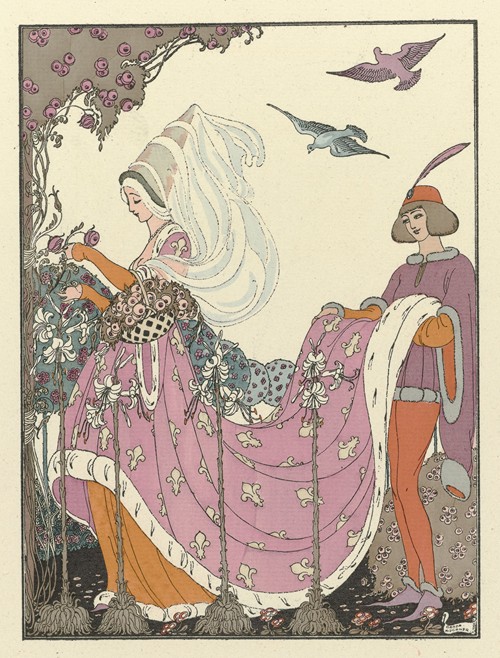 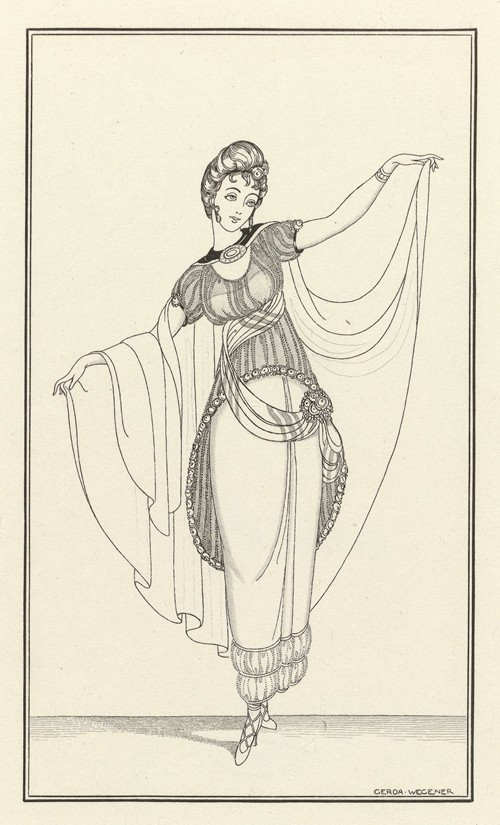 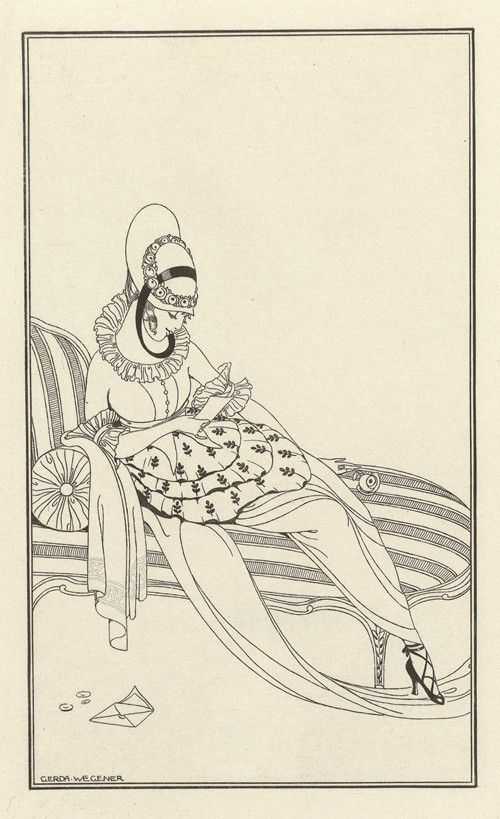 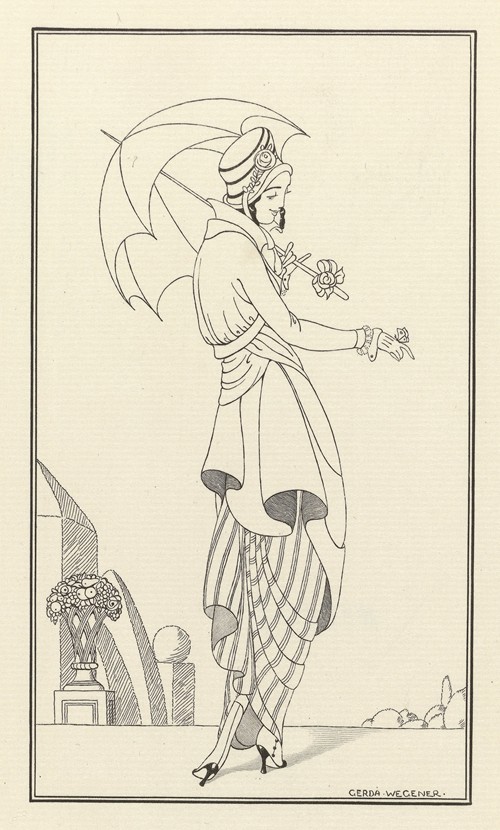 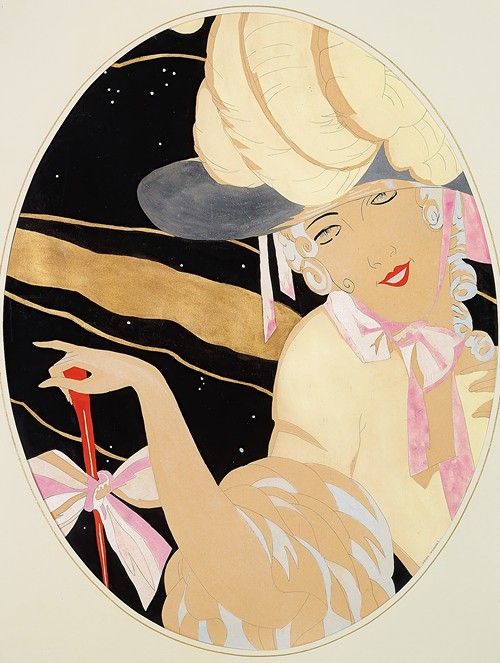 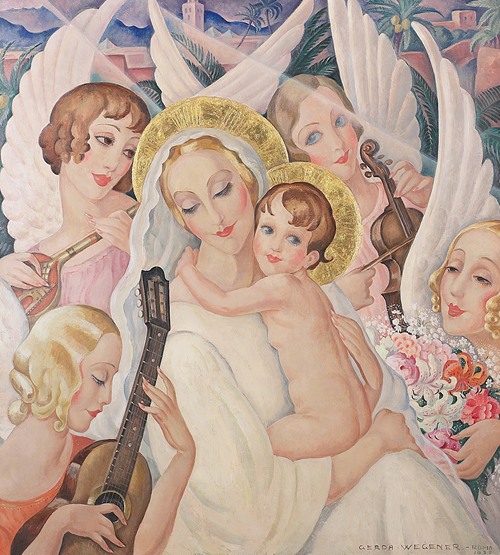 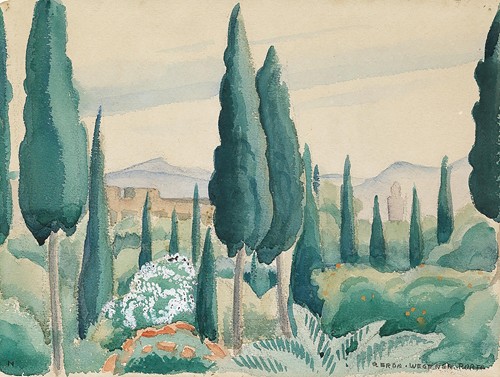 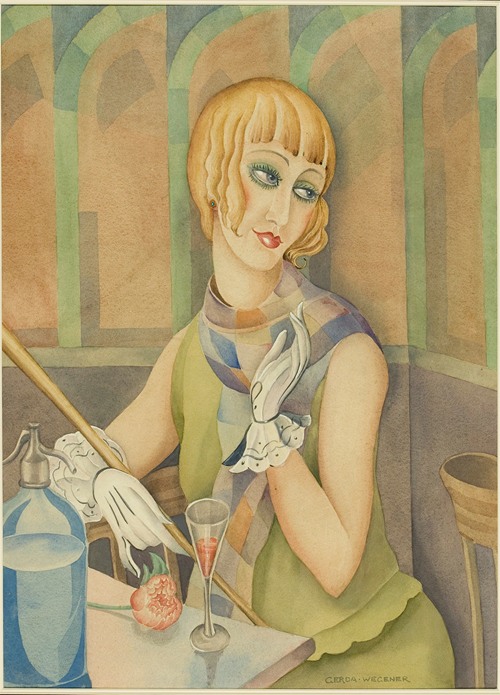 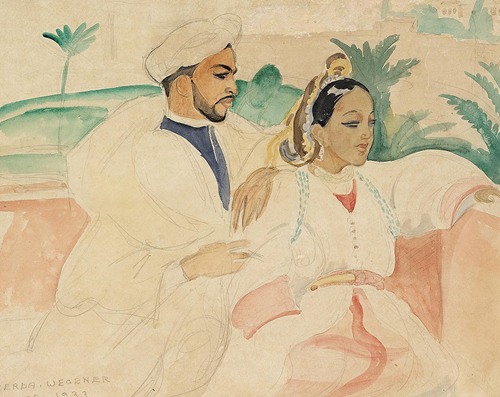 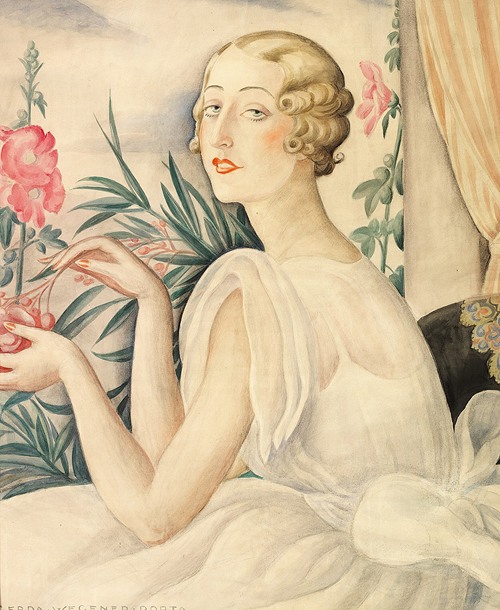 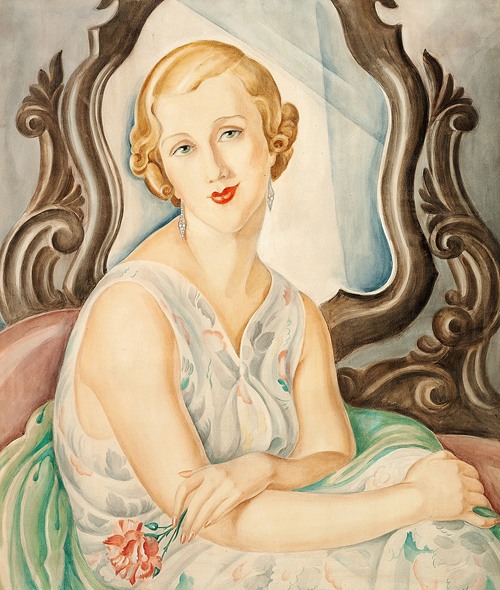 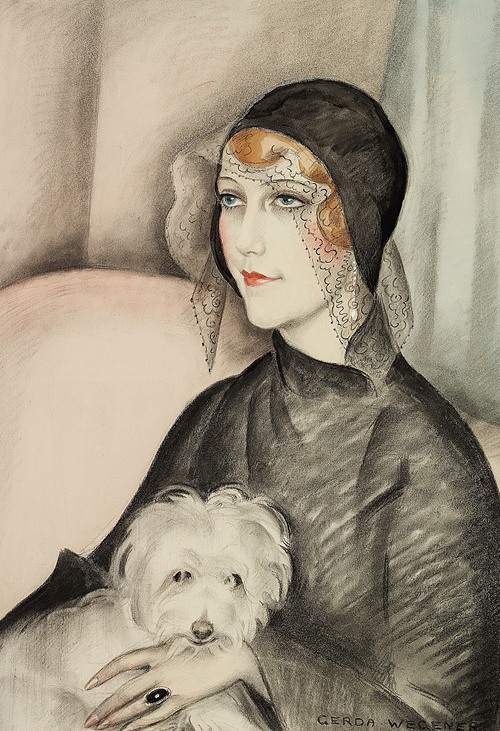 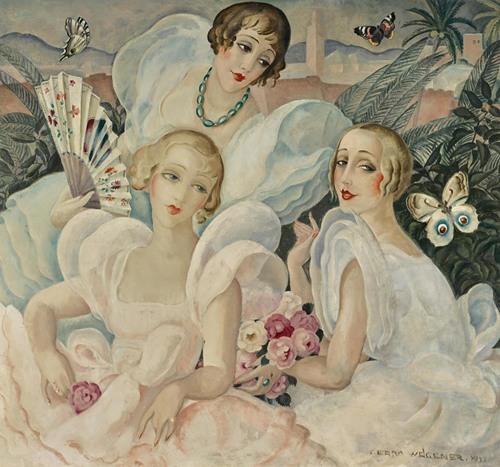 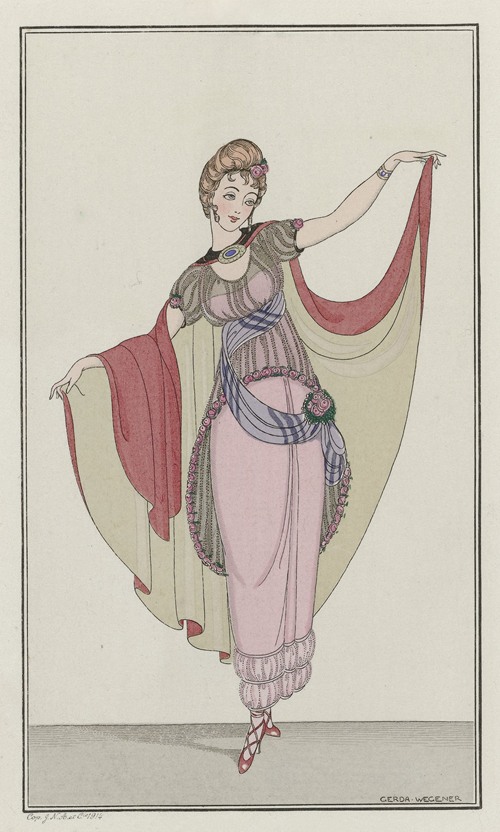 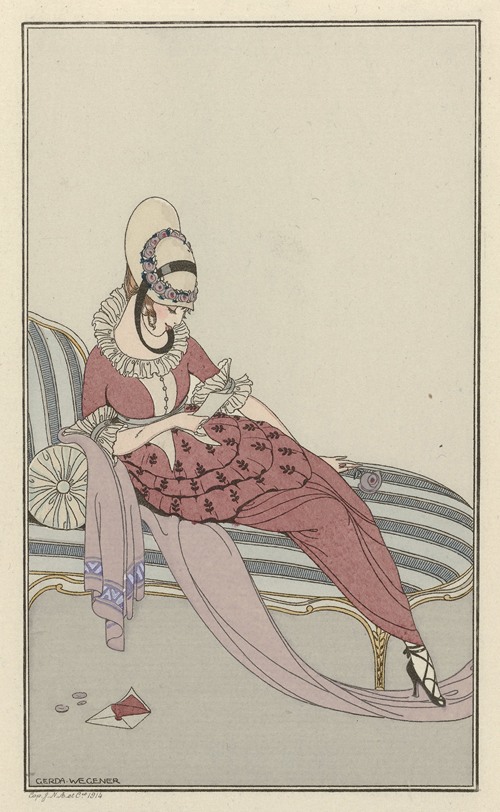