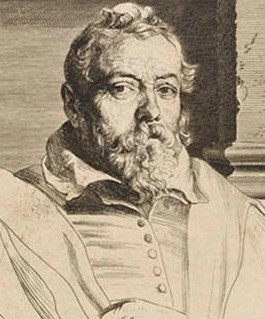 Frans Francken the Younger was a Flemish painter and the best-known member of the large Francken family of artists. Francken created altarpieces and painted furniture panels, but his reputation chiefly relies on his small and delicate cabinet pictures with historical, mythological, or allegorical themes. He played an important role in the development of Flemish art in the first half of the 17th century through his innovations in many genres including genre painting and his introduction of new subject matter. He was a frequent collaborator of leading Antwerp painters of his time.

Frans Francken the Younger was a versatile artist who practised in many genres and introduced new subjects into Flemish art. Many of his works are small historical, allegorical and biblical cabinet paintings with the focus on figures. He also invented or popularized several new themes that became popular in Flemish painting, such as genre scenes populated by monkeys (also referred to as singeries) and Kunstkammer or gallery paintings displaying a wealth of natural and artistic treasures against a neutral wall. Frans Francken the Younger introduced many other unusual themes that later became popular, such as the 'Triumphal Procession of Amphitrite' and 'Croesus and Solon'. Francken also made a series of paintings depicting witches and witchcraft, including portrayals of witches' sabbats.

The Parable Of The Wedding Feast

Apollo And The Muses

Martyrdom of the Four Crowned Martyrs (1624)

Miraculous Events at the Grave of Saint Bruno the Carthuisian (1630)

Allegory of the Christ Child as the Lamb of God (1616)

The Emperor Diocletian shows the Statue of Asclepius (1624)

The Miraculous Rescue of Maximilian of Austria

The Feast of Midas

Saint John the Baptist preaching in the wilderness