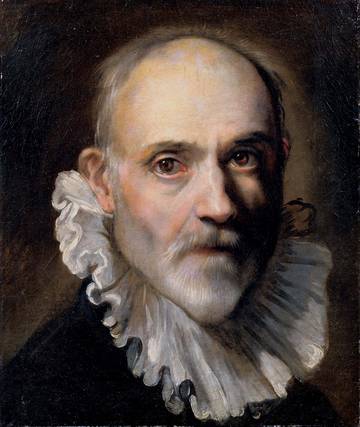 Federico Barocci was an Italian Renaissance painter and printmaker. His original name was Federico Fiori, and he was nicknamed Il Baroccio. His work was highly esteemed and influential, and foreshadows the Baroque of Rubens.

He was born at Urbino, Duchy of Urbino, and received his earliest apprenticeship with his father, Ambrogio Barocci, a sculptor of some local eminence. He was then apprenticed with the painter Battista Franco in Urbino. He accompanied his uncle, Bartolomeo Genga to Pesaro, then in 1548 to Rome, where he was worked in the pre-eminent studio of the day, that of the Mannerist painters, Taddeo and Federico Zuccari.

After passing four years at Rome, he returned to his native city, where his first work of art was a St. Margaret executed for the Confraternity of the Holy Sacrament. He was invited back to Rome by Pope Pius IV to assist in the decoration of the Vatican Belvedere Palace at Rome, where he painted the Virgin Mary and infant, with several Saints and a ceiling in fresco, representing the Annunciation.

During this second sojourn, while completing the decorations for the Vatican, Barocci fell ill with intestinal complaints. He suspected that a salad which he had eaten had been poisoned by jealous rivals. Fearing his illness was terminal, he left Rome in 1563; four years later he was said to experience a partial remission after prayers to the Virgin. Barocci henceforth often complained of frail health, though he remained productive for nearly four decades more. While he is described by contemporaries as personally somewhat morose and hypochondriacal, his paintings are lively and brilliant. Although he continued to have major altarpiece commissions from afar, he never returned to Rome, and was mainly patronized in his native city by Francesco Maria II della Rovere, duke of Urbino. The Ducal Palace can be seen in the background of his paintings, rendered in a forced perspective that seems a holdover from Mannerism.

While Barocci was removed from Rome, the fulcrum of artistic fame and influence, he continued to innovate in his style. At some point he may have seen colored chalk/pastel drawings by Correggio, but Barocci's remarkable pastel studies are the earliest examples of the technique to survive. In pastels and in oil sketches (another technique he pioneered) Barocci's soft, opalescent renderings evoke the ethereal. Such studies were part of a complex process Barocci used to complete his altarpieces.

Barocci's embrace of the Counter Reformation would shape his long and fruitful career. By 1566, he joined a lay order of Capuchins, an offshoot of Franciscans. He may have been influenced by Saint Philip Neri, whose Oratorians sought to reconnect the spiritual realm with the lives of everyday people. Neri, who was somewhat ambivalent about the accumulating richness of his Santa Maria in Vallicella, commissioned two completed works from Barocci, the pre-eminent artist of these large pious altarpieces: The Visitation (1583-6) and Presentation of the Virgin (1593–94). Neri is said to have been moved to ecstasy by Barocci's accomplishment in the former painting, which shows the Virgin and Elizabeth greeting each other.

The Circumcision Of Christ

Rest on the Flight into Egypt

Stone-thrower for the Martyrdom of St Vitalis (circa 1582)

Head of a Girl, study for a figure in the Madonna del Popolo altarpiece in the Uffizi (ca. 1575–79)