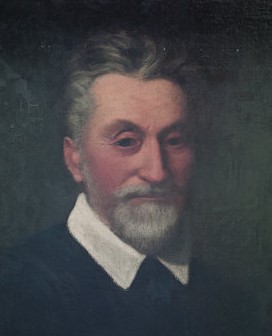 Dosso Dossi was an Italian Renaissance painter who belonged to the School of Ferrara, painting in a style mainly influenced by Venetian painting, in particular Giorgione and early Titian.

From 1514 to his death he was court artist to the Este Dukes of Ferrara and of Modena, whose small court valued its reputation as an artistic centre. He often worked with his younger brother Battista Dossi, who had worked under Raphael. He painted many mythological subjects and allegories with a rather dream-like atmosphere, and often striking disharmonies in colour. His portraits also often show rather unusual poses or expressions for works originating in a court.

Dossi was born in San Giovanni del Dosso, a village in the province of Mantua. His early training and life are not well documented; his father, originally of Trento, was a bursar (spenditore or fattore) for the Dukes of Ferrara. He may have had training locally with Lorenzo Costa or in Mantua, where he is known to have been in 1512. By 1514, he would begin three decades of service for dukes Alfonso I and Ercole II d'Este, becoming principal court artist. Dosso worked frequently with his brother Battista Dossi, who had trained in the Roman workshop of Raphael. The works he produced for the dukes included the ephemeral decorations of furniture and theater sets. He is known to have worked alongside il Garofalo in the Costabili polyptych. One of his pupils was Giovanni Francesco Surchi (il Dielai).

Dosso Dossi is known less for his naturalism or attention to design, and more for cryptic allegorical conceits in paintings around mythological themes, a favored subject for the humanist Ferrarese court (see also Cosimo Tura and the decoration of the Palazzo Schifanoia). Dossi employed eccentric distortions of proportion, which may appear caricature-like or even 'primitivist'. The art historian Sydney J. Freedberg sees this characteristic as an expression of the Renaissance aesthetic of sprezzatura (i.e. "studied carelessness", or artistic nonchalance). Dossi is also known for the atypical choices of bright pigment for his cabinet pieces. Some of his works, such as the Deposition have lambent qualities that suggest some of Correggio's works. Most of his works feature Christian and Ancient Greek themes and use oil painting as a medium.

In Hercules and the Pygmies, Hercules has fallen asleep after defeating Antaeus, and is set upon by an army of thumb-size pygmies, whom he defeats. He gathers them in his lion skin. Paintings depicting a powerful Hercules were commonly made for the then-ruler Duke Ercole II d'Este. The subjects of the Mythological Scene and Tubalcain are unknown.

In Ferrara, among his pupils were Gabriele Capellini, Jacopo Panicciati, and Giovanni Francesco Surchi.

The Three Ages of Humans

A Scene From Virgil’s Aeneid, From Alfonso I D’este’s Frieze In The ‘camerino D’alabastro’