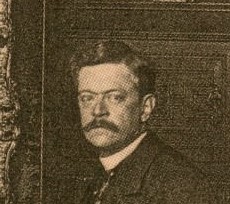 Pearce was born in Boston, Massachusetts. In 1873 he became a pupil of Léon Bonnat in Paris, and after 1885 he lived in Paris and at Auvers-sur-Oise. He painted Egyptian and Algerian scenes, French peasants, and portraits, and also decorative work, notably for the Thomas Jefferson Building at the Library of Congress at Washington. He received medals at the Paris Salon and elsewhere, and was made Chevalier of the French Legion of Honor, decorated with the Order of Leopold, Belgium, the Order of the Red Eagle, Prussia, and the Order of the Dannebrog, Denmark.

Among his best-known paintings are Beheading of St. John the Baptist|The Decapitation of St John the Baptist (1881); Prayer (1884), The Return of the Flock, and Meditation. Pearce was also among those who knew and painted the Capri muse Rosina Ferrara.

Lamentations Over The Death Of The First-Born Of Egypt (1877)

A pottery Seller In Old Cairo