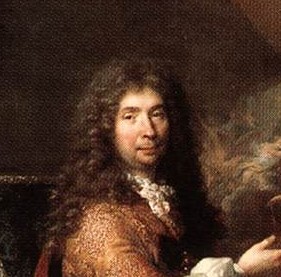 Charles Le Brun was a French painter, physiognomist, art theorist, and a director of several art schools of his time. As court painter to Louis XIV, who declared him "the greatest French artist of all time", he was a dominant figure in 17th-century French art and much influenced by Nicolas Poussin.

Born in Paris, Le Brun attracted the notice of Chancellor Séguier, who placed him at the age of eleven in the studio of Simon Vouet. He was also a pupil of François Perrier. At fifteen he received commissions from Cardinal Richelieu, in the execution of which he displayed an ability which obtained the generous commendations of Nicolas Poussin, in whose company Le Brun started for Rome in 1642.

In Rome, he remained four years in the receipt of a pension due to the liberality of the chancellor. There he worked under Poussin, adapting the latter's theories of art. While in Rome, Le Brun studied ancient Roman sculpture, made copies after Raphael, and absorbed the influence of the local painters.

On his return to Paris in 1646, Le Brun found numerous patrons, of whom Superintendent Fouquet was the most important, for whom he painted a large portrait of Anne of Austria. Employed at Vaux-le-Vicomte, Le Brun ingratiated himself with Mazarin, then secretly pitting Colbert against Fouquet.

Le Brun was the driving force behind the establishment of the French Royal Academy of Painting and Sculpture in 1648, and was elected as one of the original twelve elders in charge of its running. He remained a dominant figure at the academy and held the positions of chancellor in 1655 (from 1663 chancellor for life), rector from 1668 and director from 1683. When Colbert took control of the institution in 1661, Le Brun was there to assist him in his endeavour to reorganise it with the goal that the academicians would work towards bringing about a theoretical foundation for a national French art . Both also founded the Academy of France at Rome in 1666 as a base for promising young artists who would live and learn there for a certain period on the expense of the crown.

Another project Le Brun worked on was Hôtel Lambert. The ceiling in the gallery of Hercules was painted by him. Le Brun started work on the project in 1650, shortly after his return from Italy. The decoration continued intermittently over twelve years or so, as it was interrupted by the renovation of Vaux le Vicomte.

The nature of his emphatic and pompous talent was in harmony with the taste of the king, who, full of admiration of the paintings by Le Brun for his triumphal entry into Paris (1660) and his decorations at the Château Vaux le Vicomte (1661), commissioned him to execute a series of subjects from the history of Alexander. The first of these, "Alexander and the Family of Darius," so delighted Louis XIV that he at once ennobled Le Brun (December, 1662), who was also created Premier Peintre du Roi (First Painter of the King) with a pension of 12,000 livres, the same amount as he had yearly received in the service of the magnificent Fouquet. The King had declared him "the greatest French artist of all time". "The Family of Darius," also known as "The Queens of Persia at the Feet of Alexander," was later cut down slightly in size by Le Brun, and retouched to disguise the alteration, presumably to make the painting similar in size to a painting by Paolo Veronese that Louis XIV had acquired.

From this date all that was done in the royal palaces was directed by Le Brun. Designs had to be approved of by the king before they could be rendered into paintings or sculptures. In 1663, he became director of the Académie royale de peinture et de sculpture, where he laid the basis of academicism and became the all-powerful, peerless master of 17th-century French art. It was during this period that he dedicated a series of works to the history of Alexander The Great (The Battles of Alexander The Great), and he did not miss the opportunity to make a stronger connection between the magnificence of Alexander and that of the great King. While he was working on The Battles, Le Brun's style became much more personal as he moved away from the ancient masters that influenced him.

The works of the gallery of Apollo in the Louvre were interrupted in 1677 when Lebrun accompanied the king to Flanders (on his return from Lille he painted several compositions in the Château de Saint-Germain-en-Laye), and finally—for they remained unfinished at his death—by the vast labours of Versailles, where he reserved for himself the Halls of War and Peace (Salons de la Guerreand de la Paix, 1686), the Ambassadors' Staircase, and the Great Hall of Mirrors (Galerie des Glaces, 1679–1684). Le Brun's decoration is not only a work of art, it is the definitive monument of a reign.

In 1669, Louis XIV elected to completely renovate Versailles, which was then a tiny palace, and transform it into an opulent dwelling where he would meet with his subjects and foreign diplomats. Le Brun was in charge of its decoration down to the most minute details of arrangement and presentation. In addition to classical paintings, depictions of Louis’ reign also adorned the palace walls. The whole structure and its decorations were intended to awe visitors with the splendor, wealth and taste of the king. The Escalier des Ambassadeurs was the main staircase at the entryway to Versailles from its completion in 1679 until its destruction in 1752. The king was so pleased with its appearance that he reportedly referred to it as "Monsieur Le Brun's staircase" when he showed it to an ambassador from Spain in 1679.

At the death of Colbert, François-Michel le Tellier, Marquis de Louvois, who succeeded as superintendent in the department of public works, showed no favour to Le Brun who was Colbert's favorite, and in spite of the king's continued support Le Brun felt a bitter change in his position. This contributed to the illness which on 22 February 1690 ended in his death in Gobelins (his private mansion, in Paris).

Le Brun primarily worked for King Louis XIV, for whom he executed large altarpieces and battle pieces. His most important paintings are at Versailles. Besides his gigantic labours at Versailles and the Louvre, the number of his works for religious corporations and private patrons is enormous. Le Brun was also a fine portraitist and an excellent draughtsman, but he was not fond of portrait or landscape painting, which he felt to be a mere exercise in developing technical prowess. What mattered was scholarly composition, whose ultimate goal was to nourish the spirit. The fundamental basis on which the director of the Academy-based his art was unquestionably to make his paintings speak, through a series of symbols, costumes and gestures that allowed him to select for his composition the narrative elements that gave his works a particular depth. For Le Brun, a painting represented a story one could read. Nearly all his compositions have been reproduced by celebrated engravers.

Posthumously, Le Brun's reputation suffered in the years surrounding the French Revolution and its aftermath, due to his close connection with Louis XIV. By the end of the nineteenth century, the academic values he personified were out of fashion, and it was only in 1963, when a major Le Brun exhibition was organized at Versailles, that his work was reevaluated. He is now considered one of the finest and most versatile French artists of his time.

The Presentation of Christ in the Temple (1645)

The Relief of Candia (17th century)

The Hind Legs of a Horse