Candido Portinari was a Brazilian painter. He is considered one of the most important Brazilian painters as well as a prominent and influential practitioner of the neo-realism style in painting.

Portinari painted more than five thousand canvases, from small sketches to monumental works such as the Guerra e Paz panels, which were donated to the United Nations Headquarters in 1956. Portinari developed a social preoccupation throughout his oeuvre and maintained an active life in the Brazilian cultural and political worlds.

Born to Giovan Battista Portinari and Domenica Torquato, Italian immigrants from Chiampo Vicenza, Veneto, in a coffee plantation near Brodowski, in São Paulo. Growing up on a coffee plantation of dark soil and blue sky, Portinari gained his inspiration from the homeland he loved. In the majority of his later paintings, murals and frescoes, he used the colour blue and many browns and reds because this was the color of his home.

One of Portinari's beginner jobs was drawing photographs where he closely captured the exact image using paints and then enlarging the photos. These sold successfully because the resemblance was astounding. Portinari then studied at the Escola Nacional de Belas Artes (National School of Fine Arts) in Rio de Janeiro. In 1923, 1925 and 1927 Portinari won prizes at the Salon, and in 1928 he got a scholarship offered by the Brazilian government to study in Europe for three years. During his time in Europe Portinari did little painting, but studied the works of various European artists, visited museums, and met his future wife, Maria Martinelli. He came back to Brazil fully set on conveying the true Brazilian lifestyle and capturing the pain and struggles of his people through his art.

After his return, Portinari began portraying the reality of Brazil, from its natural beauties to the harsh lives of the country's most impoverished populations, pursuing an amalgamation of his academic formation with the modernist avant-gardes. Portinari remained himself and didn't allow his new experiences and new outlooks changed him. His roots remained important to him and he strove to portray this in his paintings; the true Brazilian spirit. He wanted the world to see the harsh reality of living conditions in Brazil and the struggle for survival. Strength, hard work, independence and authenticity shows through in almost every one of his works.

In 1939, Portinari exhibited at the New York World's Fair. In the following year, Portinari had for the first time a canvas displayed at the Museum of Modern Art. The rise of fascism in Europe, the wars and the close contact with Brazilian problematic society, reaffirmed the social character of his work, as well as conducting him to political engagement.

He joined the Brazilian Communist Party and stood for deputy in 1945 and for senator in 1947, but had to flee to Uruguay to escape the persecution of communists during the government of Eurico Gaspar Dutra. In 1951, the first São Paulo Art Biennial dedicated a special room for his works. He returned to Brazil in the following year, after a declaration of general amnesty from the government. In 1956, after the United Nations had appealed to its affiliated countries for the donation of a work of art to the organization's new headquarters. Brazil designated Portinari for the task, who took four years and around 180 studies to complete the painting. Dag Hammarskjöld, UN Secretary-General, named the work "the most important monumental work of art donated to the UN".

Even after being warned by the doctor of the risks of the toxins and poisoning, he didn't give up and continued to paint. Portinari suffered from ill health during the last decade of his life. He died in Rio de Janeiro in 1962 as a result of lead poisoning from his paints.

There were a number of commemorative events in the centenary of his birth in 2003, including an exhibition of his work in London. 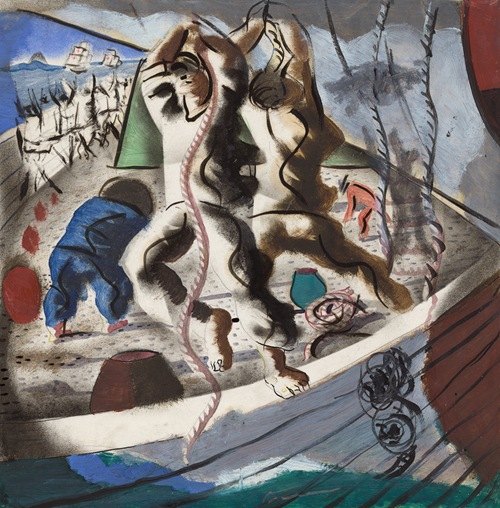 Preparatory drawing for ‘Discovery of the Land’ (1941) 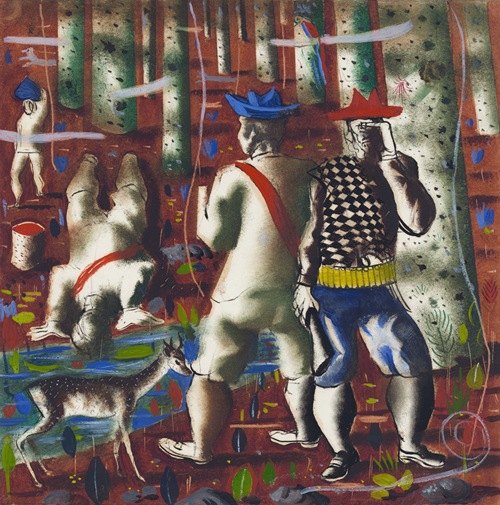 Preparatory drawing for ‘Entry into the forest’ (1941) 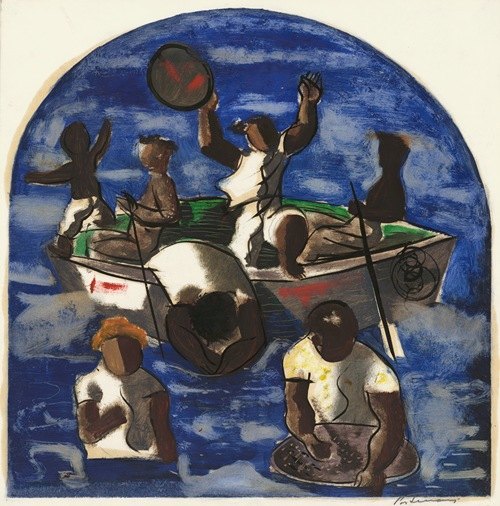 Preparatory drawing for ‘Mining for Gold’ (1941) 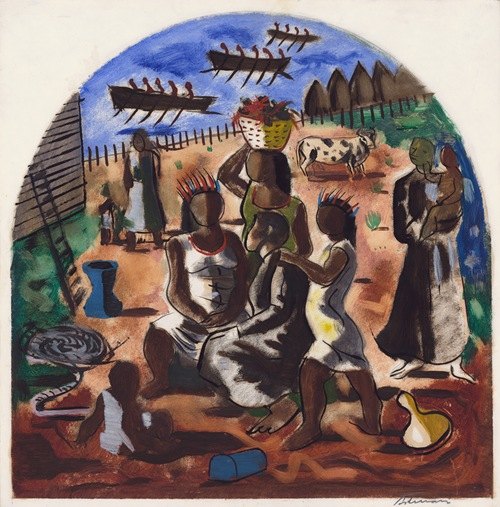 Preparatory drawing for ‘The teaching of the Indians’ (1941)