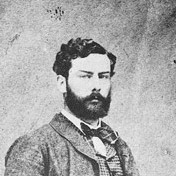 Alfred Sisley was an Impressionist landscape painter who was born and spent most of his life in France, but retained British citizenship. He was the most consistent of the Impressionists in his dedication to painting landscape en plein air (i.e., outdoors). He deviated into figure painting only rarely and, unlike Renoir and Pissarro, found that Impressionism fulfilled his artistic needs.

Among his important works are a series of paintings of the River Thames, mostly around Hampton Court, executed in 1874, and landscapes depicting places in or near Moret-sur-Loing. The notable paintings of the Seine and its bridges in the former suburbs of Paris are like many of his landscapes, characterized by tranquillity, in pale shades of green, pink, purple, dusty blue and cream. Over the years Sisley's power of expression and colour intensity increased.

Sisley was born in Paris to affluent British parents. His father, William Sisley, was in the silk business, and his mother, Felicia Sell, was a cultivated music connoisseur.

In 1857, at the age of 18, Alfred Sisley was sent to London to study for a career in business, but he abandoned it after four years and returned to Paris in 1861. From 1862, he studied at the Paris École des Beaux-Arts within the atelier of Swiss artist Marc-Charles-Gabriel Gleyre, where he became acquainted with Frédéric Bazille, Claude Monet and Pierre-Auguste Renoir. Together they would paint landscapes en plein air rather than in the studio, in order to capture the transient effects of sunlight realistically. This approach, innovative at the time, resulted in paintings more colourful and more broadly painted than the public was accustomed to seeing. Consequently, Sisley and his friends initially had few opportunities to exhibit or sell their work. Their works were usually rejected by the jury of the most important art exhibition in France, the annual Salon. During the 1860s, though, Sisley was in a better financial position than some of his fellow artists, as he received an allowance from his father. c In 1866, Sisley began a relationship with Eugénie Lescouezec (1834–1898; usually known as Marie Lescouezec), a Breton living in Paris. The couple had two children: son Pierre (born 1867) and daughter Jeanne (1869). At the time, Sisley lived not far from Avenue de Clichy and the Café Guerbois, the gathering-place of many Parisian painters.

In 1868, his paintings were accepted at the Salon, but the exhibition did not bring him financial or critical success; nor did subsequent exhibitions.

In 1870, the Franco-Prussian War began; as a result, Sisley's father's business failed, and the painter's sole means of support became the sale of his works. For the remainder of his life he would live in poverty, as his paintings did not rise significantly in monetary value until after his death. Occasionally, however, Sisley would be backed by patrons, and this allowed him, among other things, to make a few brief trips to Britain.

The first of these occurred in 1874, after the first independent Impressionist exhibition. The result of a few months spent near London was a series of nearly twenty paintings of the Upper Thames near Molesey, which was later described by art historian Kenneth Clark as "a perfect moment of Impressionism."

Until 1880, Sisley lived and worked in the country west of Paris; then he and his family moved to a small village near Moret-sur-Loing, close to the forest of Fontainebleau, where the painters of the Barbizon school had worked earlier in the century. Here, as art historian Anne Poulet has said, "the gentle landscapes with their constantly changing atmosphere were perfectly attuned to his talents. Unlike Monet, he never sought the drama of the rampaging ocean or the brilliantly colored scenery of the Côte d'Azur."

In 1881, Sisley made a second brief voyage to Great Britain.

In 1897, Sisley and his partner visited Britain again, and were finally married in Wales at Cardiff Register Office on 5 August. They stayed at Penarth, where Sisley painted at least six oils of the sea and the cliffs. In mid-August they moved to the Osborne Hotel at Langland Bay on the Gower Peninsula, where he produced at least eleven oil paintings in and around Langland Bay and Rotherslade (then called Lady's Cove). They returned to France in October. This was Sisley's last voyage to his ancestral homeland. The National Museum Cardiff possesses two of his oil paintings of Penarth and Langland.

The following year Sisley applied for French citizenship, but was refused. A second application was made and supported by a police report, but illness intervened, and Sisley remained a British national until his death. 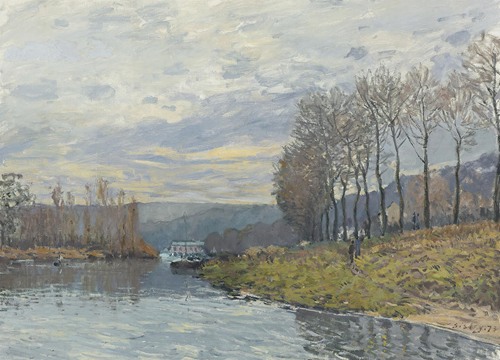 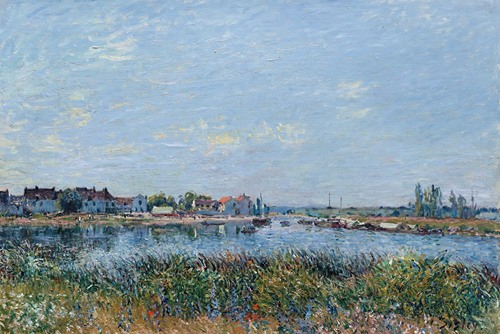 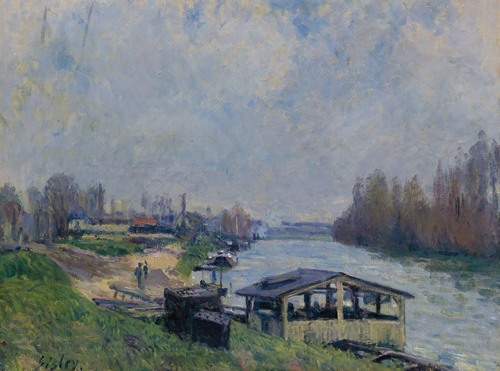 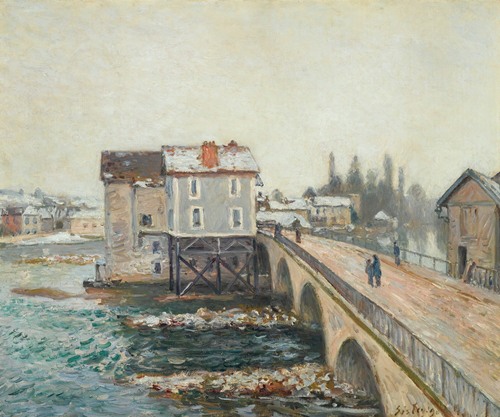 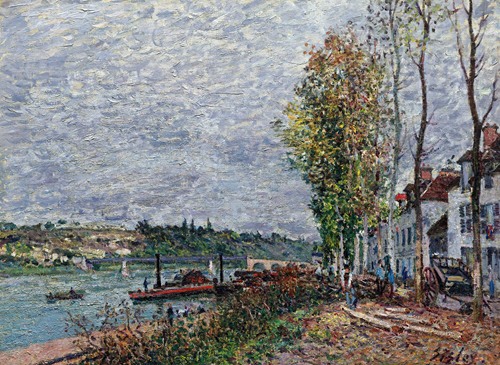 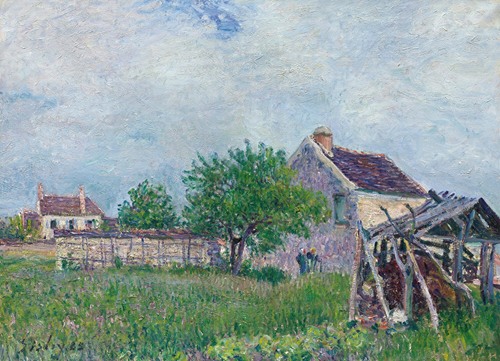 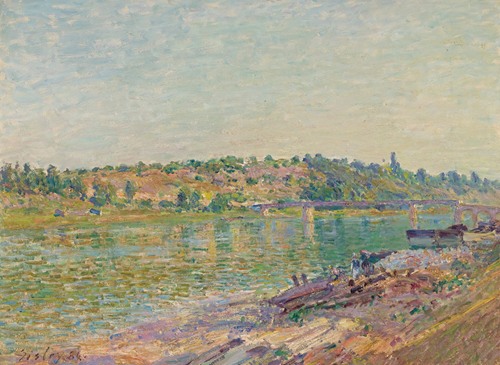 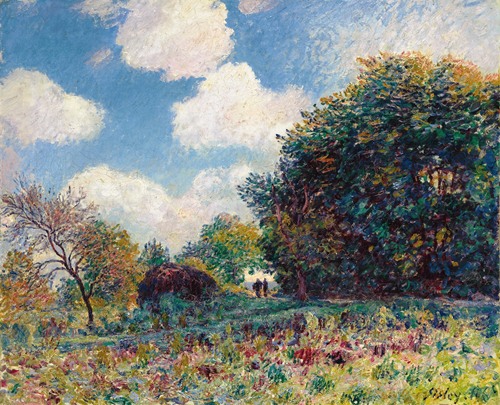 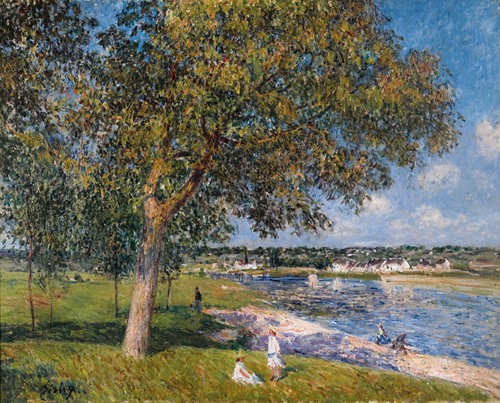 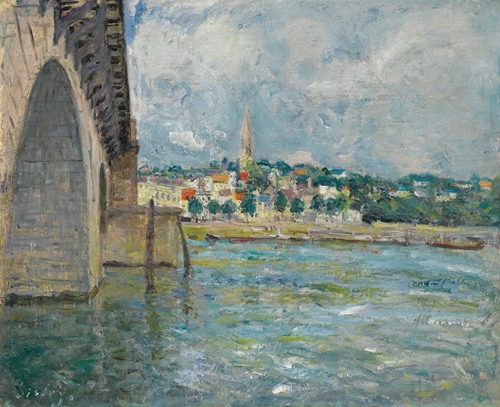 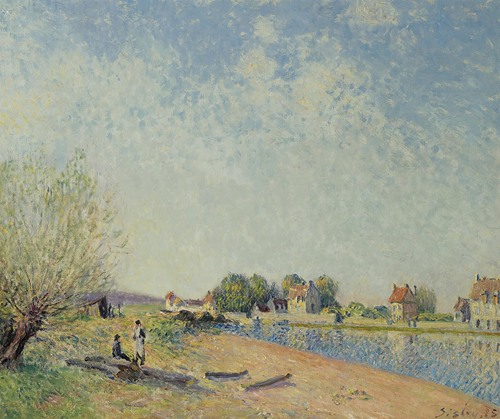 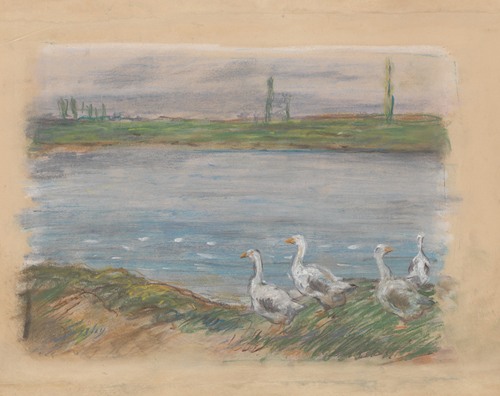 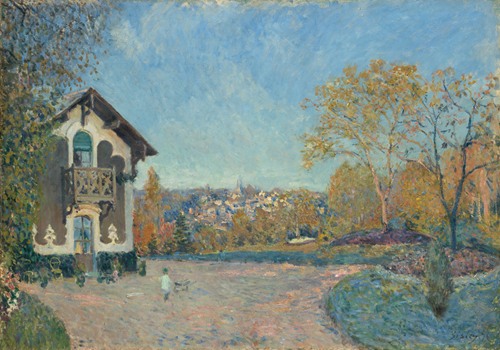 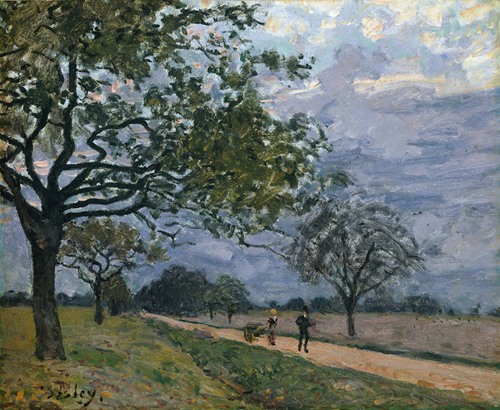 The Road from Versailles to Louveciennes (1879) 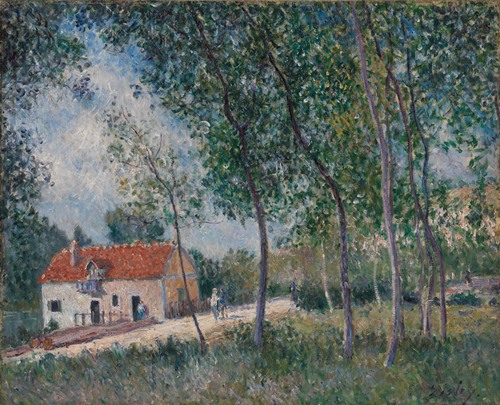 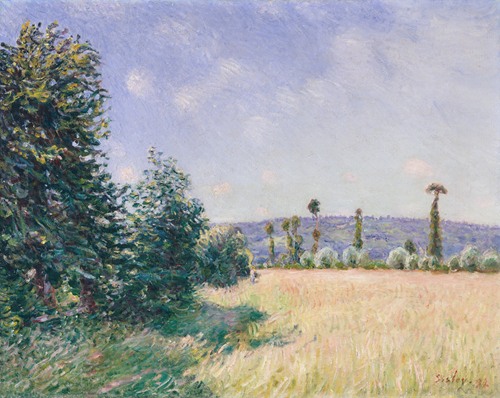 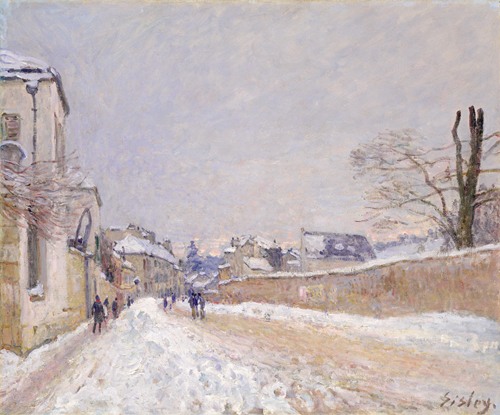 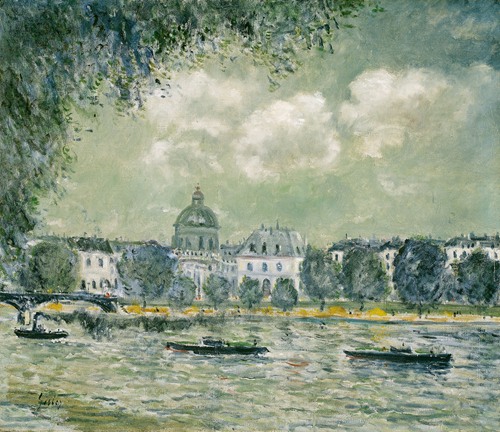 Landscape along the Seine with the Institut de France and the Pont des Arts (c. 1875) 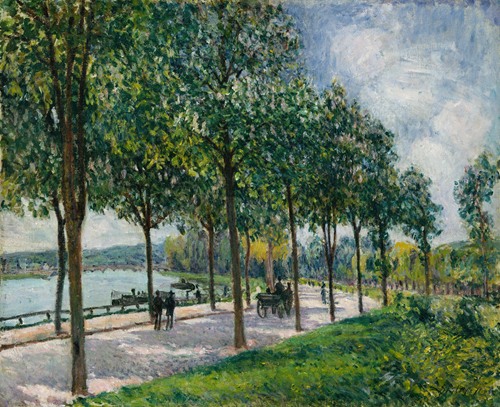 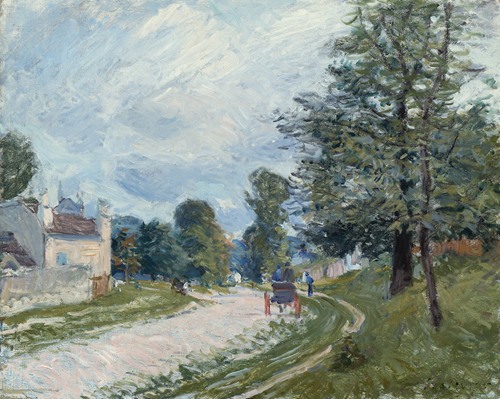 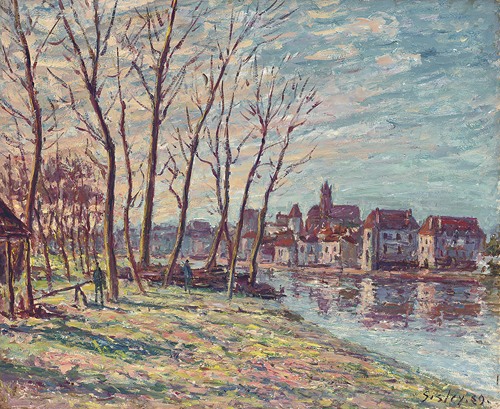 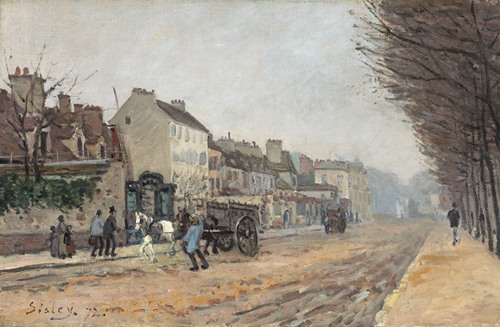 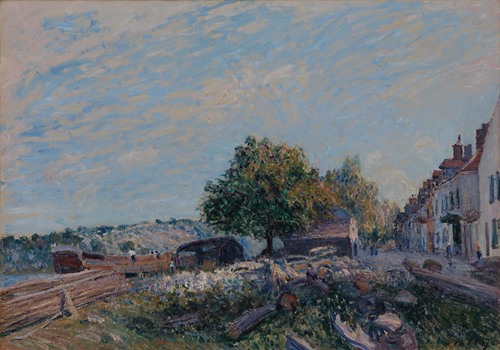 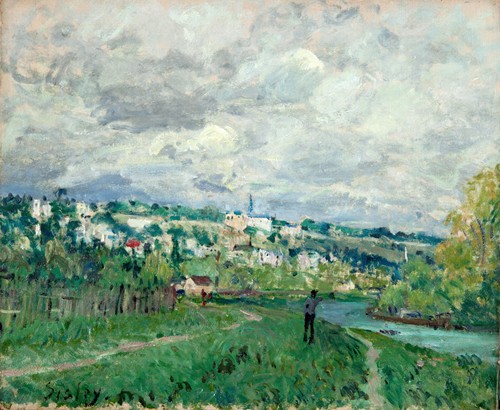 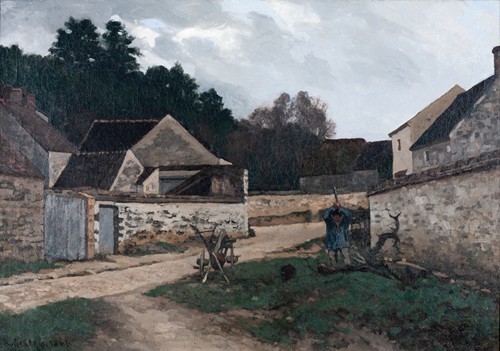