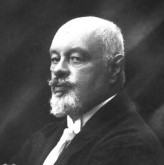 Grandson of the famous seascape painter Ivan Aivazovski, Aleksei von Hanzen studied at the academies in Dresden and Berlin and completed his training in Paris under Tony Robert-Fleury and Jules Lefebvre.

He settled in France and began to exhibit in Paris at the Salon des Artistes Français in around 1906. Although he had emigrated to France, he kept his links as a seascape painter with the Russian Navy Ministry. In 1907 he won a merit award at the Salon des Champs-Élysées with Black Sea. He exhibited a group of his works at the Galerie Georges Petit in Paris in July 1929.

A Summer Day on a Rocky Coast