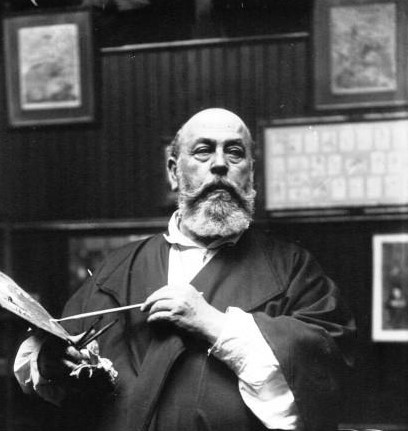 Paul-Albert Besnard was a French painter and printmaker.

He was born in Paris and studied at the École des Beaux-Arts, studied with Jean Bremond and was influenced by Alexandre Cabanel. He won the Prix de Rome in 1874 with the painting Death of Timophanes.

Until about 1880 he followed the academic tradition, but then broke away completely, and devoted himself to the study of colour and light as conceived by the Impressionists. The realism of this group never appealed to his bold imagination, but he applied their technical method to ideological and decorative works on a large scale, such as his frescoes at the Sorbonne, the Ecole de Pharmacie, the ceiling of the Comédie-Française (main theatre in Paris), the Salle des Sciences at the Hôtel de Ville, the mairie of the 1st arrondissement, and the chapel of Berck hospital, for which he painted twelve Stations of the Cross in an entirely modern spirit.

A great virtuoso, he achieved brilliant successes alike in watercolour, pastel, oil and etching, both in portraiture, in landscape and in decoration. His close analysis of light can be studied in his picture La femme qui se chauffe at the Luxembourg in Paris, one of a large group of nude studies of which a later example is Une Nymphe au bord de la mer; and in the work produced during and after a visit to India in 1911. A large panel, Peace by Arbitration, was completed seven days before the outbreak of war in 1914.

Partly under the influence of Thomas Gainsborough and Joshua Reynolds, whom he studied during a three-years stay in England, he applied his methods to a brilliant series of portraits, especially of women. Notable among these are the Portrait de Théâtre (Madame Réjane), and Mme. Roger Jourdain. The former is a good example of his daring unconventionality. A later work is The King and Queen of Belgium (1919). His landscape work is represented by L'ile heureuse, and Un Ruisseau dans la Montagne (1920). A symbolist in his decorative work, Besnard's frank delight in the external world and his “chic” luminous technique bring him close to the 18th-century French painters.

Young women lifted up by elephants