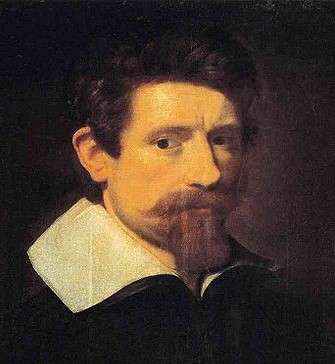 Adam Elsheimer was a German artist working in Rome, who died at only thirty-two, but was very influential in the early 17th century in the field of Baroque paintings. His relatively few paintings were small scale, nearly all painted on copper plates, of the type often known as cabinet paintings. They include a variety of light effects, and an innovative treatment of landscape. He was an influence on many other artists, including Rembrandt and Peter Paul Rubens.

Elsheimer was born in Frankfurt am Main, one of ten children and the son of a master-tailor. His father's house (which survived until destroyed by Allied bombs in 1944) was a few metres from the church where Albrecht Dürer's Heller Altarpiece was then displayed. He was apprenticed to the artist Philipp Uffenbach. He probably visited Strasbourg in 1596. At the age of twenty, he travelled to Italy via Munich, where he was documented in 1598.

His stay in Venice is undocumented, but the influence on his style is clear. He probably worked as an assistant to Johann Rottenhammer, some of whose drawings he owned. Rottenhammer was a German who had been living in Italy for some years, and was the first German painter to specialize in cabinet paintings. Uffenbach had specialized in large altarpieces, and although Elsheimer's earliest small paintings on copper seem to date from before he arrived in Italy, Rottenhammer's influence is clear on his mature work.

Elsheimer is believed to have produced some significant works in Venice, such as The Baptism of Christ (National Gallery, London) and The Holy Family (Gemäldegalerie, Berlin) which show the influence of the Venetian painters Tintoretto and Paolo Veronese, as well as Rottenhammer.

In early 1600, Elsheimer arrived in Rome and quickly made friends with contacts of Rottenhammer, notably Giovanni Faber, a Papal doctor, botanist and collector originally from Bamberg. He was Curator of the Vatican Botanical Garden, and a member of the Accademia dei Lincei, a small intellectual coterie founded in 1603, and mainly concerned with the natural sciences.

Another friend of Rottenhammer was the Flemish landscape painter Paul Bril, already established in Rome, who was (with Faber) a witness at Elsheimer's marriage, painted a picture together with him (now Chatsworth House), and was owed money by him at his death. Like Faber, Bril was a long-term resident in Rome who had converted from Lutheranism to Catholicism, as Elsheimer did later.

Both Faber and Bril knew Rubens, who was in Rome in 1601, and who became another friend, later reproaching Elsheimer for not producing more work. He knew David Teniers the Elder, recently Rubens' pupil, and there is evidence that they lodged together. In 1604 Karel van Mander, a Dutchman recently returned from Rome, published his Schilder-Boeck which praised Elsheimer's work, and described him as slow-working and making few drawings. He also spent much time in churches, studying the works of the masters. Other writers mention his exceptional visual memory, his melancholy and his kind-heartedness. In a letter after his death, Rubens wrote: "he had no equal in small figures, landscapes, and in many other subjects. ...one could have expected things from him that one has never seen before and never will see."

In 1606, Elsheimer married Carola Antonia Stuarda da Francoforte (i.e. Stuart of Frankfurt- she was of Scottish ancestry and a fellow Frankfurter), and in 1609 they had a son. The son was not mentioned in a census a year later, possibly (Klessman says optimistically) because he had been put out to a wet-nurse. She was the recent widow of the artist Nicolas de Breul (born in Verdun) and after Elsheimer's death remarried an Italian artist, Ascanio Quercia, within a year of his death. Elsheimer converted to Catholicism by 1608 (possibly 1606). He was admitted to the Accademia di San Luca, the Roman painters' Guild, in 1606, giving them a self-portrait (his only portrait, and only painting on canvas) now in the Uffizi. In spite of his fame and talents, he appears to have both lived and died in difficult financial circumstances.

Elsheimer's painting of Tobias and the Angel (1602–1603) (the "small" Tobias - now at Frankfurt) was especially well received because of its new conception of landscape. This picture was engraved by Count Hendrick Goudt and as a result was published across Europe. However, his association with Goudt, who lodged and trained with him for several years, was difficult. Elsheimer seems to have borrowed money from Goudt, which according to one account resulted in his brief incarceration in Debtor's prison. After Elsheimer's early death in 1610 in Rome, Goudt owned several of his pictures. Goudt made seven engravings of Elsheimer's paintings, which were crucial in spreading his influence, as very few of his paintings were viewable even by artists; as cabinet paintings they were mostly kept in small and very private rooms.

Elsheimer had a definite preference for choosing rare or original subjects, both for his mythological and religious paintings. Jupiter and Mercury in the house of Philemon and Baucis, (c. 1608, now Dresden) is based on an episode in Ovid, and had never been painted before. The Mocking of Ceres (Kingston, Ontario, a copy exists in the Prado), Apollo and Coronis (Liverpool), and Il Contento (Edinburgh) were equally new. Some of his religious scenes were more conventional, but his selection of the moment to depict, as in St Lawrence prepared for Martyrdom (London), is often unusual.

The Frankfurt Altarpiece of the Exaltation of the True Cross, Emperor Heraclius’ Entry into Jerusalem (1603 – 1605)

The Frankfurt Altarpiece of the Exaltation of the True Cross, The Digging for the Cross (1603 – 1605)