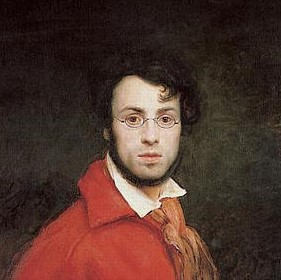 Ary Scheffer was a Dutch-French Romantic painter. He was known mostly for his works based on literature, with paintings based on the works of Dante, Goethe, and Lord Byron, as well as religious subjects. He was also a prolific painter of portraits of famous and influential people in his lifetime. Politically, Scheffer had strong ties to King Louis Philippe I, having been employed as a teacher of the latter's children, which allowed him to live a life of luxury for many years until the French Revolution of 1848.

Scheffer was the son of Johan Bernard Scheffer (1765–1809), a portrait painter who was born in Homberg upon Ohm or Kassel (both presently in Germany) and moved to the Netherlands in his youth, and Cornelia Lamme (1769–1839), a portrait miniature painter and daughter of landscape painter Arie Lamme of Dordrecht, for whom Arij (later "Ary") was named. Ary Scheffer had two brothers, the journalist and writer Karel Arnold Scheffer (1796–1853) and the painter Hendrik Scheffer (1798–1862). His parents educated him and he attended the drawing academy in Amsterdam from the age of 11 years. In 1808 his father became the court painter of Louis Bonaparte in Amsterdam, yet his father died one year later. Encouraged by Willem Bilderdijk, Ary moved to Lille, France, for further study after the death of his father. In 1811 he and his mother, who greatly influenced his career, moved to Paris, France, where he studied at the École des Beaux-Arts as a pupil of Pierre-Narcisse Guérin. His brothers followed them to Paris later.

Scheffer started exhibiting at the Salon de Paris in 1812. He began to be recognized in 1817, and in 1819 he was asked to make a portrait of the Marquis de Lafayette. Perhaps because of Lafayette's acquaintances, Scheffer and his brothers were politically active throughout their lives and he became a prominent Philhellene.

In 1822 he became drawing teacher to the children of Louis Philippe I, the Duke of Orléans. Because of his connection with them, he obtained many commissions for portraiture and other work. In 1830 riots against the rule of King Charles X resulted in his overthrow. On 30 July, Scheffer and influential journalist Adolphe Thiers rode from Paris to Orléans to ask Louis Philippe I to lead the resistance, and a few days later he became "King of the French".

That same year, Scheffer's daughter Cornélia was born. He registered the name of her mother as "Maria Johanna de Nes", but nothing is known of her and she may have died soon after Cornelia's birth. Considering that his grandmother's name was "Johanna de Nes", it has been speculated that he kept the name of Cornelia's mother secret so as not to compromise the reputation of a noble family. Cornelia Scheffer (1830–1899) became a sculptor and painter in her own right. Scheffer's mother did not know of her namesake granddaughter until 1837, after which she cared for her until she died only two years later. Scheffer became an associate member of the Royal Institute of the Netherlands in 1846, and resigned in 1851.

Scheffer and his family prospered during the reign of Louis Philippe I, who abdicated on 24 February 1848. Scheffer and Hendrik were inundated with artistic commissions, and they taught numerous students in their workshop in Paris, so many that of the works produced during this period that bear his signature the number that he actually made himself cannot be verified.

Scheffer was elevated as commander of the Legion of Honour in 1848. As a captain of the Garde Nationale he escorted the French royal family in its escape from the Tuileries and escorted the Duchess d'Orléans to the Chambre des Députés, where she in vain proposed her son as the next monarch of France. Scheffer fought in the army of Cavaignac during the June Days Uprising in Paris of 23 to 26 June 1848. The cruelty and hatred that the governmental faction exhibited and the misery of the lower classes so shocked him that he withdrew from politics and refused to make portraits of the family of Napoléon III, who reigned after the Uprising. On 16 March 1850 he married Sophie Marin, the widow of General Baudrand, and on 6 November of that year he finally became a French citizen. He continued to frequently travel to the Netherlands, and traveled to Belgium, Germany, and England, but a heart condition impaired his activity and eventually caused his death in 1858 in his summer house in Argenteuil. He is buried in the Cimetière de Montmartre.

The Last Communion of Saint Louis (1823)