The Artist died in 1425 so this work is in the public domain in its country of origin and other countries where the copyright term is the Artist's life plus 70 years or fewer. 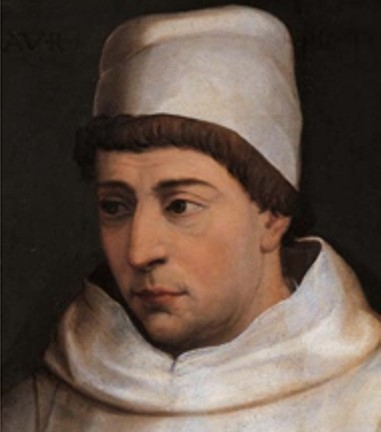 Lorenzo Monaco was an Italian painter of the late Gothic-early Renaissance age. He was born Piero di Giovanni in Siena. Little is known about his youth, apart from the fact that he was apprenticed in Florence. He was influenced by Giotto and his followers Spinello Aretino and Agnolo Gaddi.

In 1390 he joined the Camaldolese monastery of Santa Maria degli Angeli. He was thenceforth generally known as Lorenzo Monaco (English: "Lawrence the Monk").

Starting from around 1404 his works show the influence of the International Gothic, of Lorenzo Ghiberti's earliest works and of Gherardo Starnina. From this period is the Pietà in the Gallerie dell'Accademia in Florence. His works, often over a gilded background, showed in general a spiritual value, and usually did not feature profane elements.

In 1414 he painted the Coronation of the Virgin (now at the Uffizi), characterized by a great number of saints and brilliant colours. In the late part of his life, Lorenzo did not accept the early Renaissance innovations introduced by artists such as Masaccio and Brunelleschi. This is visible in the Adoration of the Magi of 1420–1422, where the now widespread geometrical perspective is totally absent. Lorenzo's works remained popular in the 1420s, as testified by the numerous commissions he received, such as the Stories of the Virgin in the Bartolini Salimbeni Chapel of Santa Trinita, one of his few frescoes.

Giorgio Vasari includes a biography of Lorenzo Monaco in his Lives. According to the Florentine historian, he died from an unidentified infection, perhaps gangrene or a tumour.

Decorated Initial with Scene of Christ Entering the Temple. (1408–11)

The Intercession of Christ and the Virgin (before 1402)