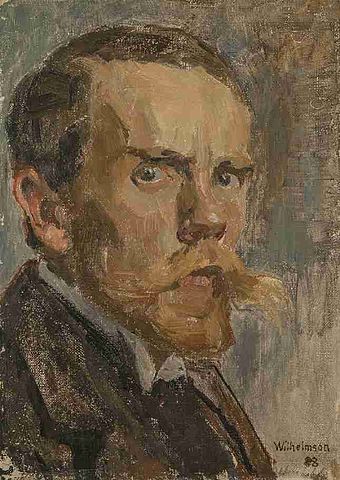 His father, Anders Wilhelmson, was a "Bästeman" (a type of Naval Master), who died in a shipwreck in 1875. His mother, Amalia, opened a small shop to support the family. Some relatives were in the printing business so, in 1881, he was apprenticed to the lithographers Meyer & Köster in Gothenburg. He also took evening classes at the School of Design and Crafts. He later became a full time student of Carl Larsson at the Valand Academy.

In 1888, on the recommendation of Larsson and his former employers, he was awarded a scholarship from the Kommerskollegium that enabled him to travel to Leipzig. While there, he worked for several notable lithography firms. Despite this, he remained undecided as to whether he should pursue a career in lithography or strike out on his own as an artist. By 1890, he had saved enough money to move to Paris.

In Paris, he worked as an advertising artist while taking classes from Paul Sérusier and Maurice Denis at the Académie Julian. He may also have studied, at least briefly, with Jules Lefebvre and Tony Robert-Fleury. In 1893, he visited Brittany and, in 1895, had a small showing at the Salon. He returned to Sweden in 1896.

Upon his return, the art patron, Pontus Fürstenberg, invited him to become the Director at the Valand Academy. He accepted and held that position until 1910.

He was appointed a Professor at the Royal Swedish Academy of Fine Arts in 1925 and became a member in 1926, in reverse of the usual order.

Scene from the Swedish West Coast (1898)

Church-Goers in a Boat