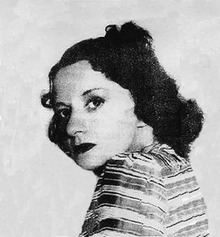 Margaret Brundage, born Margaret Hedda Johnson, was an American illustrator and painter who is remembered chiefly for having illustrated the pulp magazine Weird Tales. Working in pastels on illustration board, she created most of the covers for Weird Tales between 1933 and 1938.

Brundage was born in Chicago, Illinois, of Swedish and Irish ancestry. Her father, Jonathan E. Loutitt (later Loutit) died when she was eight years old; she was raised by her mother (Margaret Jane Loutit Johnson) and grandmother Margaret (Houston) Loutit, for whom she was named, in a Christian Science household. Both her parents had come to Chicago from the Orkney Islands off the coast of Scotland. Brundage's mother remained both a widow and a devout Christian Scientist for the rest of her life, and supplemented their income by instructing beginning Christian Science disciples.

Margaret Hedda Johnson graduated from Girard Grammar School and attended McKinley High School in Chicago, where Walt Disney was a classmate. ("I finished; he didn't," she later remarked.) She graduated from McKinley in 1919. As editor of the high school newspaper. Immediately after high school, Margaret worked providing illustrations for Chicago newspapers - she would draw fashion designs in both colour and in black-and-white, from ideas and descriptions provided by an agency. Her education continued at Art Institute of Chicago and the Chicago Academy of Fine Arts in the 1920s; she later stated that her failure to graduate was due to her inept lettering though she continued her freelance work for the agency while she completed her coursework. During this period – Prohibition – Margaret also worked at the Dill Pickle Club, a bohemian speakeasy affiliated with the Wobblies, where she met a sometime decorator and house painter nicknamed "Slim" due to his spare frame. This was Myron Reed Brundage, legendary Writer, Free thinker, and allegedly a notorious womaniser.

In 1927, she married Myron "Slim" Brundage in Chicago. Brundage was a former hobo, and the founder of the College of Complexes. They had one son, Kerlyn Byrd Brundage (born 27 August 1927; died 1972), always called "Byrd". The marriage ended in divorce in 1939.

In 1932 Brundage was looking for more work, and found herself at the office of Farnsworth Wright, then editor of the weird fiction magazine Weird Tales. Brundage began working for Wright by doing a few covers for his side publication Oriental Stories, later known as The Magic Carpet. Wright was so impressed with these that he hired Brundage to draw for Weird Tales. Over the period from 1933 to 1938, Brundage executed cover art, first for then, famously, for Weird Tales. She was the most frequently-appearing cover artist on Weird Tales during her stint with the magazine. Her first cover appeared on the September 1932 issue; she created covers for 39 straight issues from June 1933 to August 1936. Her last original cover was for the Jan. 1945 issue, for a total of 66 original-artwork covers. (The total of 67, often cited in sources, includes a repeat of that final 1945 cover on the November 1953 issue.) She was paid $90 per cover—enough to support herself, her son, and her invalid mother (died 1940). From 1936 through 1938, Brundage often alternated with others as cover artist; Virgil Finlay was her chief competitor.

Brundage's art frequently featured damsels in distress in various states of full or partial nudity; her whipping scenes were especially noteworthy and controversial. Her sensual images usually illustrated scenes from the pieces chosen by editor Farnsworth Wright as cover stories; her work was so popular among readers that some WT writers, like Seabury Quinn, cannily included scenes in their stories that would make good Brundage covers, since cover feature stories earned their authors more money.

Pulp covers were notorious for their explicit content, and Brundage's were no exception. During this time, it would have been seen as unacceptable for a woman to be creating such material so she signed her work "M. Brundage", to keep her identity in the dark for her readers. Complaints about the erotic nature of her work increased after October 1934, when editor Wright revealed that the "M." stood for "Margaret," disclosing that the artist was a woman. After 1938, when the magazine's editorial offices moved from Chicago to New York City, a new 'decency' standard was imposed (primarily through the efforts of then-mayor of New York Fiorello La Guardia) on pulp magazines sold at newsstands, and the nude or semi-nude young women that had been the primary subjects of Brundage's covers were out. Practical problems with shipping Brundage's fragile pastel art from Chicago to New York also diminished her appeal to the editorial regime that followed Wright's 1940 departure.

She continued to draw after her relationship with the magazine ended, and appeared at a number of science fiction conventions and art fairs, where some of her original period works were stolen. Yet she never fully recovered financially from the loss of regular work at WT; her later years were spent in relative poverty. She continued to work until her death.

The Princess and the Peacock