The Temptation of Saint Anthony (1570s)

The Artist died in 1587 so this work is in the public domain in its country of origin and other countries where the copyright term is the Artist's life plus 70 years or fewer. 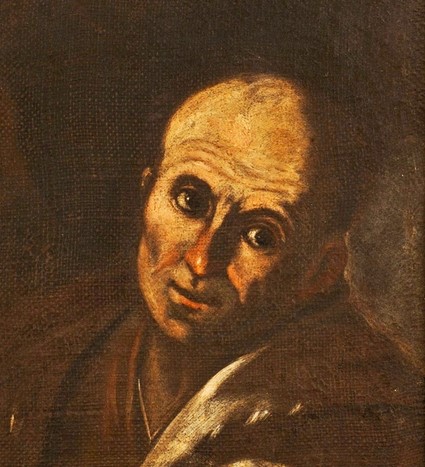 Lelio Orsi, also known as Lelio da Novellara, was a Mannerist painter and architect of the Reggio Emilia school in northern Italy.

He was born and died in Novellara, and much of his work was completed in Reggio. He appears to have studied under such as Giovanni Giarola, a pupil of Antonio da Correggio. There is documentary evidence that he visited Rome in 1554–55, and may have been influenced by Girolamo Bedoli, Correggio and the prototypic mannerists Giulio Romano as well as Michelangelo and his successor Daniele da Volterra. He is said to have trained Raffaellino da Reggio. Other pupils or followers were Giovanni Bianchi, known as il Bertone Reggiano. and Jacopo Borbone of Novellara. He was active in both exterior and interior decoration, and much of his work is in small cabinet pieces, not large altarpieces. Much of his output ended in the collections of the Dukes of Este in Ferrara.

Orsi appears to be "reading" Correggio with the lens of Mannerism: the nocturnal, limned ethereal simplicity of Correggio here is constrained into contorted poses, perspective distorted, and settings crowded. The effect at times is unsettling. While the angels above unsheathing divine swords are meant to carry the day in The Martyrdom of Saint Catherine it appears that the execution was stymied by breakdown within the complex set of depicted gears.

Design for a Frieze with Worshipers Bringing Sacrificial Offerings (1555)