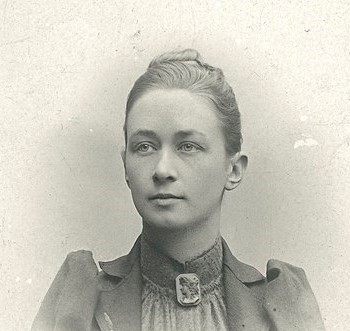 Hilma af Klint was a Swedish artist and mystic whose paintings were the first Western abstract art known to the current art community. A considerable body of her abstract work predates the first purely abstract compositions by Kandinsky. She belonged to a group called "The Five", a circle of women inspired by Theosophy who shared a belief in the importance of trying to contact the so-called "High Masters"—often by way of séances. Her paintings, which sometimes resemble diagrams, were a visual representation of complex spiritual ideas.

She was the fourth child of Mathilda af Klint (née Sonntag) and Captain Victor af Klint, a Swedish naval commander. Hilma af Klint spent summers with her family at their manor Hanmora on the island of Adelsö in Lake Mälaren. In these idyllic surroundings she came into contact with nature at an early stage in her life. This deep association with natural forms was to be an inspiration in her work. Later in life, Hilma af Klint lived permanently on Munsö, an island next to Adelsö.

From her family, Hilma af Klint inherited a great interest for mathematics and botany. She showed an early ability in visual art and, after the family moved to Stockholm, she studied at Tekniska skolan in Stockholm (Konstfack today), where she learned portraiture and landscape painting.

She was admitted at the Royal Academy of Fine Arts at the age of twenty. During the years 1882–1887 she studied mainly drawing, portrait painting, and landscape painting. She graduated with honors and was allocated a scholarship in the form of a studio in the so-called "Atelier Building" (Ateljébyggnaden), owned by The Academy of Fine Arts between Hamngatan and Kungsträdgården in central Stockholm. This was the main cultural hub in the Swedish capital at that time. The same building also held Blanch's Café and Blanchs Art Gallery, where conflict existed between the conventional art view of the Academy of Fine Arts and the opposition movement of the "Art Society" (Konstnärsförbundet), inspired by the French En Plein Air painters. Hilma af Klint began working in Stockholm, gaining recognition for her landscapes, botanical drawings, and portraits.

In 1880 her younger sister Hermina died, and it was at this time that the spiritual dimension of her life began to develop. Her interest in abstraction and symbolism came from Hilma af Klint's involvement in spiritism, very much in vogue at the end of the nineteenth and beginning of the twentieth century. Her experiments in spiritual investigation started in 1879. She became interested in the Theosophy of Madame Blavatsky and the philosophy of Christian Rosencreutz. In 1908 she met Rudolf Steiner, the founder of the Anthroposophical Society, who was visiting Stockholm. Steiner introduced her to his own theories regarding the Arts, and would have some influence on her paintings later in life. Several years later, in 1920, she met him again at the Goetheanum in Dornach, Switzerland, the headquarters of the Anthroposophical Society. Between 1921 and 1930 she spent long periods at the Goetheanum.

Af Klint's work can be understood in the wider context of the Modernist search for new forms in artistic, spiritual, political, and scientific systems at the beginning of the twentieth century. There was a similar interest in spirituality by other artists during this same period, including Wassily Kandinsky, Piet Mondrian, Kasimir Malevitch, and the French Nabis, in which many, like af Klint, were inspired by the Theosophical Movement. However, the artistic transition to abstract art and the nonfigurative painting of Hilma af Klint would occur without any contacts with the contemporary modern movements.

The works of Hilma af Klint are mainly spiritual, and her artistic work is a consequence of this.