The Artist died in 1618 so this work is in the public domain in its country of origin and other countries where the copyright term is the Artist's life plus 70 years or fewer. 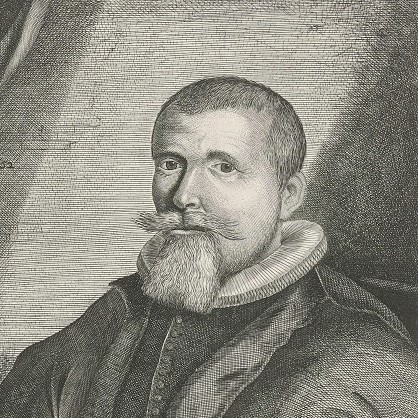 Gortzius Geldorp was a Flemish Renaissance artist who was active in Germany where he distinguished himself through his portrait paintings.

Geldorp became court painter to the Duke of Terra Nova, Carlo d'Aragona Tagliavia, whom he accompanied on his trips. He travelled to Cologne with the Duke who was participating in peace negotiations with the Dutch Republic. Geldorp stayed in the city while remaining a companion of the Duke on his travels. In 1610 Geldorp took over the seat of Barthel Bruyn the Younger on the city council of Cologne. Geldorp was a successful portrait painter working for the aristocracy and other prominent patrons.

Geldorp was mainly a painter of individual and group portraits. Van Mander also mentions some history paintings such as a Diana, a Susanna, an Evangelist, the History of Esther and Ahasverus and two busts of Christ und Mary. These history paintings typically take the form of portrait-style depiction of a saint or a biblical or mythological figure. An example is the Venus, or a young woman en deshabillé (Sotheby's London sale of 2 May 2018 lot 27), which shows Venus in the form of a portrait of a semi-nude woman.

There are 70 known works by him which are mostly painted on panel. A series of nine family portraits are part of the collection of the Rijksmuseum, Amsterdam.

He had a brilliant and powerful palette in which the browns dominate. His later works are characterised by soft transitions and a blueish tone in the wrists and neck of his subjects.

Some of his paintings were engraved by Crispijn van de Passe.

Head of a lady

Head of a lady