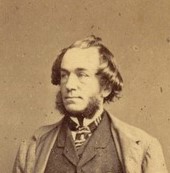 John Leech was a British caricaturist and illustrator. He was best known for his work for Punch, a humorous magazine for a broad middle-class audience, combining verbal and graphic political satire with light social comedy. Leech catered to contemporary prejudices, such as anti-Americanism and antisemitism and supported acceptable social reforms. Leech's critical yet humorous cartoons on the Crimean War help shape public attitudes toward heroism, warfare, and Britons' role in the world.

Leech also enjoys fame as the first illustrator of Charles Dickens' 1843 novella A Christmas Carol. He was furthermore a pioneer in comics, creating the recurring character Mr. Briggs and some sequential illustrated gags.

Crinolines by the River

Caricatures of the counties of Devonshire and Gloucestershire

Pot Valiant; Scene in a Tap-Room

Caricature of the County Lancashire