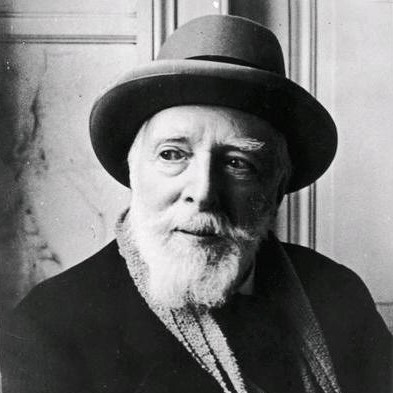 James Sidney Edouard, Baron Ensor was a Belgian painter and printmaker, an important influence on expressionism and surrealism who lived in Ostend for most of his life. He was associated with the artistic group Les XX.

Ensor's father, James Frederic Ensor, born in Brussels to English parents, was a cultivated man who studied engineering in England and Germany. Ensor's mother, Maria Catherina Haegheman, was Belgian. Ensor himself lacked interest in academic study and left school at the age of fifteen to begin his artistic training with two local painters. From 1877 to 1880, he attended the Académie Royale des Beaux-Arts in Brussels, where one of his fellow students was Fernand Khnopff. Ensor first exhibited his work in 1881. From 1880 until 1917, he had his studio in the attic of his parents' house. His travels were very few: three brief trips to France and two to the Netherlands in the 1880s, and a four-day trip to London in 1892.

During the late 19th century, much of Ensor's work was rejected as scandalous, particularly his painting Christ's Entry Into Brussels in 1889 (1888–89). The Belgium art critic Octave Maus famously summed up the response from contemporaneous art critics to Ensor's innovative (and often scathingly political) work: "Ensor is the leader of a clan. Ensor is the limelight. Ensor sums up and concentrates certain principles which are considered to be anarchistic. In short, Ensor is a dangerous person who has great changes. ... He is consequently marked for blows. It is at him that all the harquebuses are aimed. It is on his head that are dumped the most aromatic containers of the so-called serious critics." Some of Ensor's contemporaneous work reveals his defiant response to this criticism. For example, the 1887 etching "Le Pisseur" depicts the artist urinating on a graffitied wall declaring (in the voice of an art critic) "Ensor est un fou" or "Ensor is a Madman."

Ensor's paintings continued to be exhibited and he gradually won acceptance and acclaim. In 1895 his painting The Lamp Boy (1880) was acquired by the Royal Museums of Fine Arts of Belgium in Brussels, and he had his first solo exhibition in Brussels. By 1920 he was the subject of major exhibitions; in 1929 he was named a Baron by King Albert, and was the subject of the Belgian composer Flor Alpaerts's James Ensor Suite; and in 1933 he was awarded the band of the Légion d'honneur. Alfred H. Barr, Jr., the founding director of the Museum of Modern Art in New York, after considering Ensor's 1887 painting Tribulations of Saint Anthony (now in MoMA's collection), declared Ensor the boldest painter working at that time.

Even in the first decade of the 20th century, however, Ensor's production of new works was diminishing, and he increasingly concentrated on music—although he had no musical training, he was a gifted improviser on the harmonium, and spent much time performing for visitors. Against the advice of friends, he remained in Ostend during World War II despite the risk of bombardment. In his old age, he was an honored figure among Belgians, and his daily walk made him a familiar sight in Ostend. He died there after a short illness, on 19 November 1949.