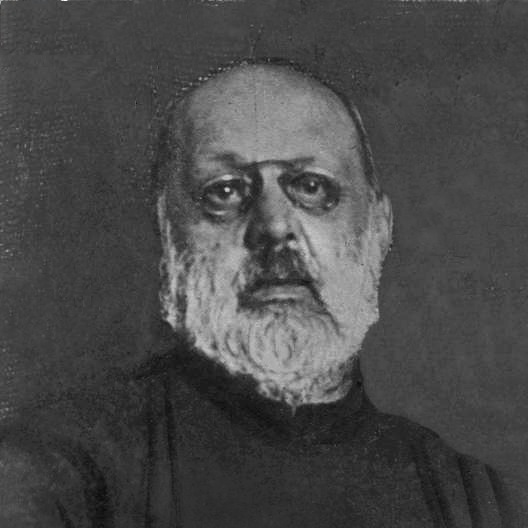 Albert Chmielowski - born Adam Hilary Bernard Chmielowski - was a Polish nobleman, noted painter, disabled veteran of the Uprising of 1863, a professed religious and founder of both the Albertine Brothers and Albertine Sisters servants of the homeless and destitute.

He was orphaned at age 8 when his father died and, 10 years later, by the death of his mother. Guardianship and care of the family fell to their paternal aunt, Petronela. After home schooling Chmielowski went on to study agroforestry at the Puławy Polytechnic Institute with a view to managing his late parents' estate.

He became involved in independence politics and joined the January Uprising. Chmielowski participated in a battle on 1 October 1863 in which a Russian grenade killed his horse and damaged his leg to the extent that it had to be amputated. The injured Chmielowski had been carried to a woodman's cabin where Finnish soldiers allied with Russia found him. The captain recognized him since there were persistent rumours that Chmielowski evaded all gunfire and was invulnerable, but told him his leg had to be removed, to which Chmielowski is believed to have said: "Give me a cigar - that will help me pass the time". The operation went ahead, successfully though without anesthesia. He offered his intense suffering to God as he endured the excruciating pain. Chmielowski was then taken to a hospital for a doctor to assess him - the soldiers then needed to decide what to do with their captive - but accomplices helped him to escape from the hospital hidden in a coffin. He was eventually fitted with a permanent wooden prosthesis. He offered up his loss of a limb to God and for the cause of Polish independence.

The vicious response of the Czarist authorities to this insurrection forced Chmielowski to leave Poland. He stopped in Ghent in Belgium where he resumed engineering studies. During this period he discovered he also had a talent for painting which he began to develop, despite the objections of family trustees at his change of direction.

This was however short-lived and in 1870 he joined the Munich Art Academy, where he was befriended by some celebrated Polish artists, including, Stanisław Witkiewicz, Józef Chełmoński, Aleksander Gierymski, Leon Wyczółkowski. He was prolific and sent his work to exhibitions in Poland. He was for time a popular artist. Religious themes began to appear at this juncture such as his St. Margaret's vision and his most celebrated work, Ecce homo, currently in the chapel of the Albertine Sisters in Kraków.

In 1874 he became a well-known and popular artist in Kraków and worked as a painter until 1875. he first went back to Munich from Paris before returning to his homeland where he published an article asserting that art was to be "the friend of man". He lived in Warsaw for a time before settling in Kraków. But he did not like the fame his works bought him and he was even hospitalized on one occasion for depression. His strong political convictions inspired his interest in the human condition and he developed a gentle and compassionate spirit which also made him aware of the suffering of the poor in the area. He felt compelled to help those in need and volunteered in the homeless shelters in Kraków. Years of deep reflection would cause Chmielowski to abandon his painting career in order to live among the poor and to accept a beggar's life. In 1879 he spent a brief period of time in Lwów with a friend.

While working on an image of Christ, he had perceived a religious vocation and on 24 September 1880 he entered the novitiate of the Jesuits at Stara Wies but faced a terrible trial at a retreat where he became anxious about his decision, and he soon fell ill. His brother Stanisław came to retrieve him and take him to his home to recuperate, where he decided not to return to the Jesuits because that path was not for him. He soon discovered the Rule of Saint Francis of Assisi which inspired him and prompted him to seek them out with the intention of joining their order. It was around this time that his spiritual director was a Lazarist priest.

On 25 August 1887 he joined the Third Order of Saint Francis and took their habit, and the religious name, "Albert". He made his first profession at the hands of the Cardinal Archbishop of Kraków Albin Dunajewski. He took up residence in the public shelter where he had been volunteering. In 1888 he took his final religious vows and on 25 August 1888 founded the Servants of the Poor and on 15 January 1891 - alongside Maria Jabłońska - founded a parallel women's congregation known as the Albertine Sisters who organized food and shelter for the homeless and destitute. Chmielowski was to spend a brief period at a Carmelite monastery where he came upon the works of John of the Cross who would be his favourite author. He also came to know the Carmelite superior, Raphael Kalinowski who suggested he might become a Carmelite. Chmielowski, however saw his path as that of a Franciscan.

He died at noon on 25 December 1916 - on Christmas - due to stomach cancer in the shelter that he had established. He had received the Anointing of the Sick on the 23 December when his condition began to deteriorate. He was buried in the Rakowicki Cemetery. His remains were exhumed on 15 September 1932 and placed in a metal coffin. They were exhumed once again on 31 May 1949 and placed in a Discalced Carmelite church.

Death and conflagration, central section of the triptych “Disaster” (1870)