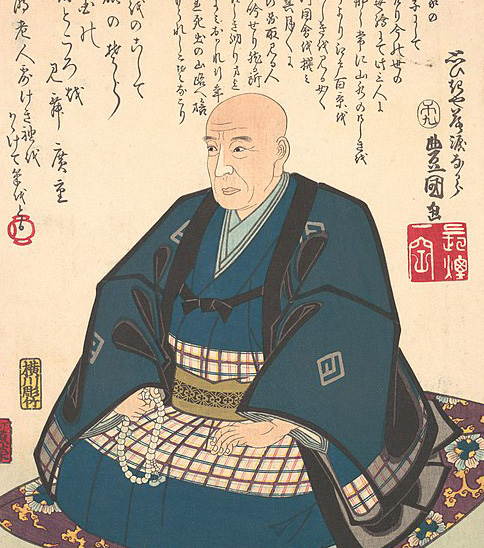 Utagawa Hiroshige, born Andō Hiroshige, was a Japanese ukiyo-e artist, considered the last great master of that tradition. Hiroshige is best known for his horizontal-format landscape series The Fifty-three Stations of the Tōkaidō and for his vertical-format landscape series One Hundred Famous Views of Edo. The subjects of his work were atypical of the ukiyo-e genre, whose typical focus was on beautiful women, popular actors, and other scenes of the urban pleasure districts of Japan's Edo period (1603–1868). The popular series Thirty-six Views of Mount Fuji by Hokusai was a strong influence on Hiroshige's choice of subject, though Hiroshige's approach was more poetic and ambient than Hokusai's bolder, more formal prints. Subtle use of color was essential in Hiroshige's prints, often printed with multiple impressions in the same area and with extensive use of bokashi (color gradation), both of which were rather labor-intensive techniques.
Hiroshige's work came to have a marked influence on western European painting towards the close of the 19th century as a part of the trend in Japonism. Western European artists, such as Manet and Monet, collected and closely studied Hiroshige's compositions. Vincent van Gogh even went so far as to paint copies of two of Hiroshige's prints from One Hundred Famous Views of Edo.

More Illustrations in Book: 53 Stations of the Tokaido (Gyosho edition) (View all 55)