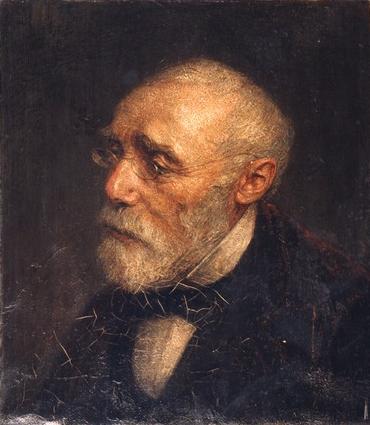 Jozef Israëls was a Dutch painter. He was a leading member of the group of landscape painters referred to as the Hague School and, during his lifetime, "the most respected Dutch artist of the second half of the nineteenth century".

He was born in Groningen, of Jewish parents. His father, Hartog Abraham Israëls, intended for him to be a businessman, and it was only after a determined struggle that he was allowed to embark on an artistic career. He studied initially from 1835 to 1842 at the Minerva Academy in his home town Groningen.

He continued his studies subsequently in Amsterdam, studying at the Royal Academy for Fine Arts which later became the State Academy for Fine Arts in Amsterdam. He was a pupil of Jan Kruseman and attended the drawing class at the academy. From September 1845 until May 1847 he was in Paris, working in the history painter Picot's studio and taking classes at the Ecole des Beaux-Arts under James Pradier, Horace Vernet and Paul Delaroche. He returned to Amsterdam in September 1845 where he resumed his studies at the Academy until May 1847. Israels remained in Amsterdam until 1870, when he moved to The Hague and became a leading member of the Hague School of landscape painters.

Israëls has often been compared to Jean-François Millet. As artists, even more than as painters in the strict sense of the word, they both, in fact, saw in the life of the poor and humble a motive for expressing with peculiar intensity their wide human sympathy; but Millet was the poet of placid rural life, while in almost all Israëls' pictures there is some piercing note of woe. Edmond Duranty said of them that they were painted with gloom and suffering.

He began with historical and dramatic subjects in the romantic style of the day. By chance, after an illness, he went to recuperate his strength at the fishing-town of Zandvoort near Haarlem, and there he was struck by the daily tragedy of life. Thenceforth he was possessed by a new vein of artistic expression, sincerely realistic, full of emotion and pity.

Among his more important subsequent works are The Zandvoort Fisherman (in the Amsterdam Gallery), The Silent House (which gained a gold medal at the Brussels Salon, 1858) and Village Poor (a prize at Manchester).

In 1862, he achieved great success in London with his Shipwrecked, purchased by Mr Young, and The Cradle, two pictures that the Athenaeum magazine described as the most touching pictures of the exhibition. A portrait of Jozef Israëls was painted by the Scottish painter George Paul Chalmers .