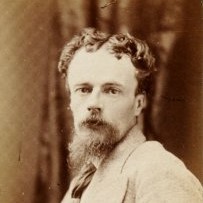 John Atkinson Grimshaw was an English Victorian-era artist best known for his nocturnal scenes of urban landscapes. Today, he is considered one of the great painters of the Victorian era, as well as one of the best and most accomplished nightscape and townscape artists of all time. He was called a "remarkable and imaginative painter" by the critic and historian Christopher Wood in Victorian Painting (1999).

Grimshaw's love for realism stemmed from a passion for photography, which would eventually lend itself to the creative process. Though entirely self-taught, he is known to have used a camera obscura or lenses to project scenes onto canvas, which made up for his shortcomings as a draughtsman and his imperfect knowledge of perspective. This technique, allegedly also used by Caravaggio, as well as Vermeer, was condemned by a number of his contemporaries who believed it demonstrated less skill than painting by eye, with some claiming that his paintings appeared to "show no marks of handling or brushwork", while others "were doubtful whether they could be accepted as paintings at all". However, many recognised his mastery of colour, lighting and shadow, as well as his unique ability to provoke strong emotional responses in the viewer. James McNeill Whistler, who Grimshaw worked with in his Chelsea studios, stated, "I considered myself the inventor of nocturnes until I saw Grimmy's moonlit pictures."

He was born on 6 September 1836 in a back-to-back in Park Street, Leeds to Mary and David Grimshaw. In 1856 he married his cousin Frances Hubbard (1835–1917). In 1861, at the age of 24, to the dismay of his parents, he left his job as a clerk for the Great Northern Railway to become a painter. He first exhibited in 1862, mostly paintings of birds, fruit, and blossom, under the patronage of the Leeds Philosophical and Literary Society. He and his wife moved in 1866 to a semi-detached villa, which is now numbered 56 Cliff Road in Headingley and has a Leeds Civic Trust blue plaque, and in 1870 to Knostrop Old Hall. Grid Reference: SE 32125 32100. He became successful in the 1870s and rented a second home, Castle-by-the-Sea in Scarborough, Scarborough became a favourite subject.

He died on 13 October 1893 of tuberculosis and is buried in Woodhouse Cemetery, now called St George's Fields, in Leeds.

The Sere and Yellow Leaf

Still life with a pineapple, grapes, nuts and plums (1862)

The Wharfe valley, with Barden Tower beyond (1870s)