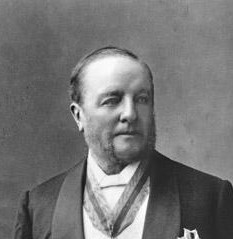 Sir Frederick McCoy KCMG FRS, was an Irish palaeontologist, zoologist, and museum administrator, active in Australia. He is noted for founding the Botanic Garden of the University of Melbourne in 1856.

McCoy was the son of Simon McCoy and was born in Dublin; some sources have his year of birth as 1823, however 1817 is the most likely. He was educated in Dublin and at Cambridge for the medical profession.

McCoy's interests, however, became early centred in natural history and, especially, geology. At the age of eighteen he published a Catalogue of Organic Remains compiled from specimens exhibited in the Rotunda at Dublin (1841). He assisted Sir RJ Griffith by studying the fossils of the carboniferous and silurian rocks of Ireland, resulting in two publication: A Synopsis of the Character of Carboniferous Limestone Fossils of Ireland (1844) and Synopsis of the Silurian Fossils of Ireland (1846).

In 1846 Sedgwick secured his services, and for at least four years he devoted himself to the determination and arrangement of the fossils in the Woodwardian Museum at Cambridge. Sedgwick wrote of him as "an excellent naturalist, an incomparable and most philosophical palaeontologist, and one of the steadiest and quickest workmen that ever undertook the arrangement of a museum" (Life and Letters of Sedgwick, ii. 194). Together they prepared the important and now classic work entitled A Synopsis of the Classification of the British Palaeozoic Rocks, with a Systematic Description of the British Palaeozoic Fossils in the Geological Museum of the University of Cambridge. Meanwhile, McCoy in 1850 had been appointed professor of geology in Queen's College, Belfast.

McCoy's examination of fossil material preserving the teeth of Thylacoleo, an extinct carnivore, saw him enter the debate on the apparent absence of large predators in Australia's mammalian fauna; McCoy sided with Richard Owen's interpretation of his new species as representing a "marsupial lion".

In 1877, an educational poster bearing McCoy's name was published showing the "dangerous snakes of Victoria". This poster "imprinted McCoy's name into the minds of generations of Victorian schoolchildren, in association with those images of deadly serpents."
In 1854, McCoy accepted the newly founded professorship of natural science in the University of Melbourne, where he lectured for upwards of thirty years. When McCoy began his work at the university there were few students, and for many years he took classes in chemistry, mineralogy, botany, zoology, comparative anatomy, geology and palaeontology. In endeavouring to cover so much ground it was impossible for him to keep his reading up to date in all these sciences, and he remained most distinguished as a palaeontologist.

In 1857, he took over the National Museum of Natural History and Geology in Melbourne. He convinced the Melbourne University and state Government to house the museum at the university. After a new building for it was constructed, it was re-opened as the National Museum of Victoria in 1864. McCoy built up significant natural history and geological collections for the museum, as well as spending a substantial sum setting up a reference library to assist the scientific research undertaken by the Museum's first curators. McCoy was in correspondence with several prominent scientists and collectors of the time, including John Gould, from whom he purchased specimens, including mammals, insects, shells, and bird skins, as well as copies of Gould's scientific publications for the museum.

Frederick McCoy described three species of Australia's venomous snakes during 1878–1879, including Oxyuranus microlepidotus, commonly known as the inland taipan or fierce snake, which is considered to be the world's most venomous snake.

McCoy helped to found a society intended to introduce exotic animals to Australia by "acclimatisation", responsible for the release of fish, mammals and flocks of birds with an often disastrous ecological impact; the Acclimatisation Society would later be renamed the Victorian Zoological Society. McCoy sought to replace what he perceived as the silence or unpleasant noises of the Australian bush with sounds of English songbirds, and celebrated the successful introduction of the european rabbit and starling which were already recognised as pests by the colonial farmers.

W. R. Gerdtz, in a 2001 paper in The Victorian Naturalist, noted that "McCoy's belief in the Creator's perfect and universal plan of successive creation appeared to be contradicted by the fossil evidence McCoy himself described."

McCoy contributed many papers to local societies, and continued his active scientific work for fifty-eight years – his last contribution, "Note on a new Australian Pterygotus," was printed in the Geological Magazine for May 1899. He was awarded the Murchison Medal of the Geological Society of London in 1879, was elected F.R.S. in 1880, and was one of the first to receive the Hon. D.Sc. from the University of Cambridge. In 1886, he was made CMG, and in 1891 KCMG. He died in Melbourne on 16 May 1899.

A species of Australian lizard, Anepischetosia maccoyi, is named in his honour.

McCoy's life and career was commemorated by two special issues of The Victorian Naturalist published in 2001.