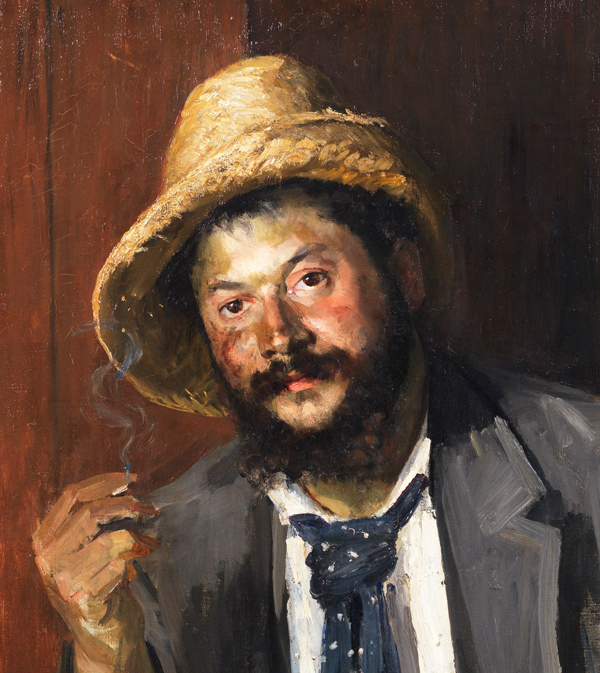 Ernst Abraham Josephson was a Swedish painter and poet. He specialized in portraits, genre scenes of folklife and folklore.

He was born to a middle-class family of merchants of Jewish ancestry. His uncle, Ludvig Josephson (1832-1899) was a dramatist and his uncle Jacob Axel Josephson (1818-1880) was a composer. When he was ten, his father Ferdinand Semy Ferdinand Josephson (1814-1861) left home and he was raised by his mother, Gustafva Jacobsson (1819-1881) and three older sisters.

At the age of sixteen, he decided to become an artist and, with his family's support, enrolled at the Royal Swedish Academy of Fine Arts. His primary instructors there were Johan Christoffer Boklund and August Malmström. He was there until 1876, when he received a Royal Medal for painting.

After leaving the Academy, he and his friend and fellow artist Severin Nilsson (1846-1918) visited Italy, Germany and the Netherlands, where they copied the Old Masters. His breakthrough came in Paris, where he was able to study with Jean-Léon Gérôme at the École des Beaux-Arts. He soon began concentrating on portraits, including many of his friends and fellow Swedes in France. For a time, he shared a studio with Hugo Birger (1854–1887). His personal style developed further during a trip to Seville with his friend, Anders Zorn, from 1881 to 1882.
His private life did not go well, however. By his late twenties, he was afflicted with syphilis. His romantic life suffered as a consequence, as he was forced to break off a promising relationship with a young model named Ketty Rindskopf.

In the 1880s, a painting that is now considered one of his masterpieces, Strömkarlen (1882-1884) was rejected by the Nationalmuseum. It was eventually purchased by Prince Eugen (1865-1947), himself a skilled amateur artist and art patron, who hung it at his home, Waldemarsudde, now a museum on Djurgården in Stockholm. In total Ernst Josephson is also represented at the museum with ten other oil paintings and a large number of drawings.
In 1881, his mother died. They had been very close and it affected him deeply. There was one bright spot; in 1883 he obtained the patronage of Pontus Furstenberg (1827-1902), a wealthy merchant and art collector. In 1885, he became a supporter of the "Opponenterna [sv]", a group that was protesting the outmoded teaching methods at the Swedish Academy. But his interest in the group diminished when he failed to win election to their governing board.

By the summer of 1888, he was beginning to have delusions and hallucinations, brought on by the progression of his illness. He installed himself on the Île-de-Bréhat in Brittany, where he had spent the previous summer with painter and engraver Allan Österlind (1855-1938) and his family. There, he became involved in spiritism, possibly inspired by Österlind's interest in occult phenomena. While in his visionary states, he wrote poems and created paintings that he signed with the names of dead artists. Some of his best known and most influential works were created during this period.

Shortly after, Österlind took him back to Sweden and he was admitted to Ulleråkers sjukhus, a mental institution in Uppsala. He remained there for several months. The diagnosis was paranoia, but his condition would now most likely be called schizophrenia. After being released, he continued to associate with his old friends, who did what they could to help him. His paintings had become rather distorted, but his earlier works were shown at exhibitions in Paris and Berlin, thanks to arrangements made by Richard Bergh and Georg Pauli, and he received several medals for them. As the years progressed, his physical health declined. First he suffered from rheumatic problems, which prevented him from painting. Then he was diagnosed with diabetes, which was the cause of his death in 1906.