His paintings can be seen in Venice, Milan, The Louvre and the Château de Gaillon (Normandy, France). One of his better-known paintings is the Madonna with the Green Cushion (c. 1507) in the Louvre.

Solario was born in Milan. He was one of the most important followers of Leonardo da Vinci, and brother of Cristoforo Solari, who gave him his first training whilst employed extensively on work at the Milan cathedral, and at the Certosa di Pavia. In 1490 he accompanied his brother to Venice, where he seems to have been strongly influenced by Antonello da Messina, who was then active in the city. The fine portrait of a Venetian Senator (currently at the National Gallery of London) displays Antonello's plastic conception of form and was probably painted about 1492. The two brothers returned to Milan in 1493. The Ecce Homo at the Poldi-Pezzoli Museum, notable for its strong modelling, may have been painted soon after his arrival.

Solari's earliest dated work is a Holy Family and St. Jerome (at the Brera Gallery), with a fine landscape background, executed at Murano in 1495. The Leonardesque type of the Madonna proves that Andrea after his return from Venice, became strongly influenced by the great Florentine artist, who was then carrying everything before him. To this period of Andrea belong a small Crucifixion (1503, at the Louvre) and the portrait of Charles d'Amboise (Louvre); the portrait of Giovanni Longoni (1505, National Gallery of London); the Annunciation (1506, Fitzwilliam Museum, Cambridge); and the beautiful Madonna with the Green Cushion (Louvre), for which a sensitive drawing of the Virgin's head is in the Biblioteca Ambrosiana at Milan; and the Head of the Baptist in a silver charger (1507, Louvre).

In 1507 Andrea Solari went to France with letters of introduction to the Cardinal of Amboise, and was employed for two years on frescoes in the chapel of his castle of Gaillon in Normandy. According to Giovanni Morelli's suggestion, the artist may have visited Flanders before returning to his native country, and this may account for the Flemish character of his later work.

The artist was back in Italy in 1515, the date of the Flight into Egypt (Poldi-Pezzoli Collection) with its harmonious and detailed landscape background. To this period belong the Procession to Calvary (Borghese Gallery, Rome); the portrait of the Chancellor Domenico Morone (Palazzo Scotti, Milan); and the Woman playing a guitar (at the National Gallery of Ancient Art, Rome).

Andrea's last work was an altarpiece representing The Assumption of the Virgin, left unfinished at his death and completed by Bernardino Campi about 1576. 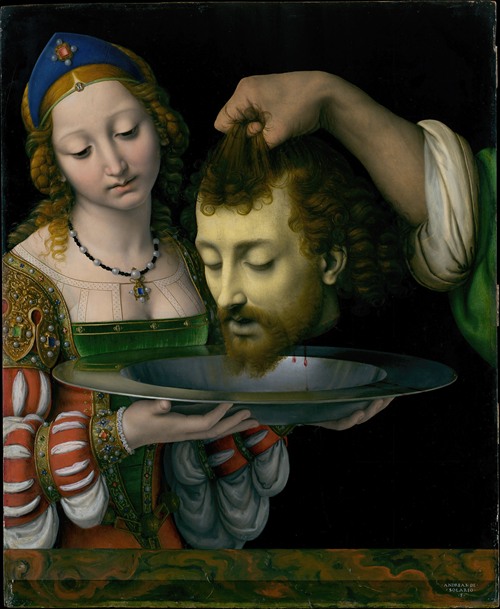 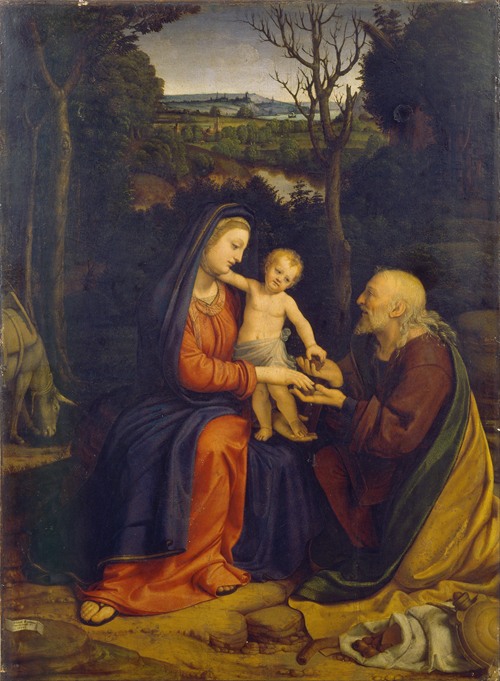 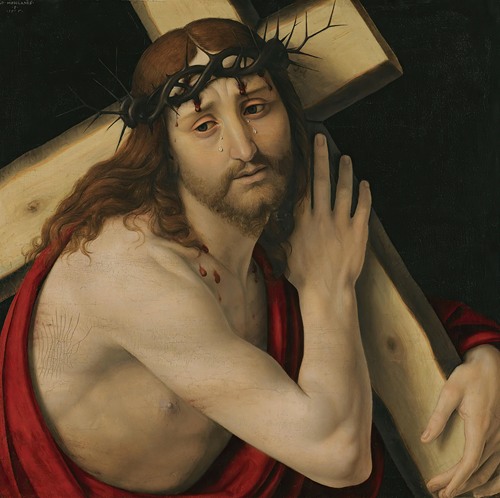 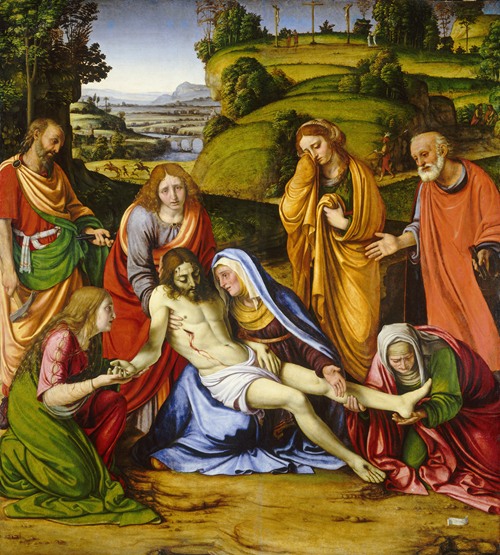 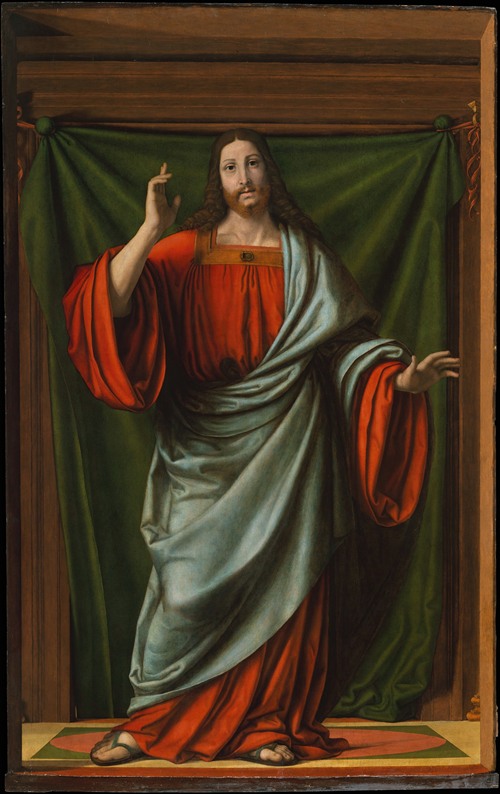 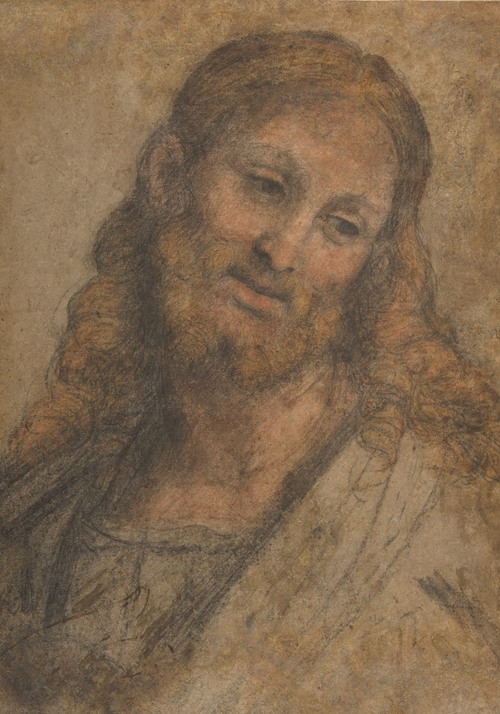 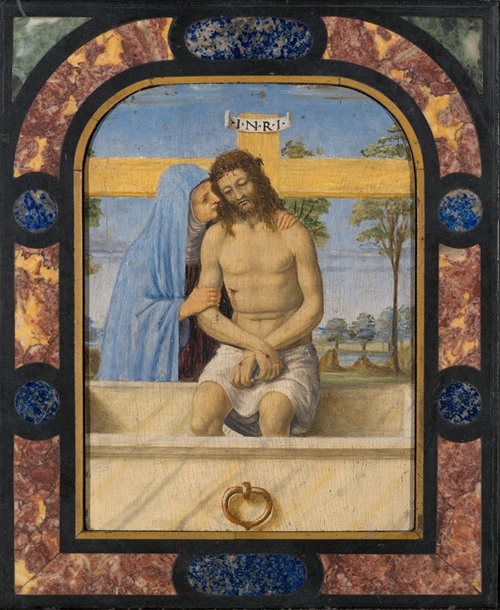 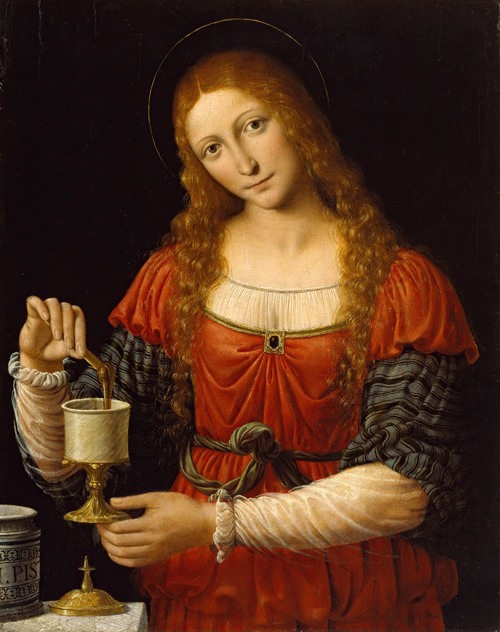