Artworks still under copyright are only for informational or educational purposes under fair use guidelines. Using these images for any other purpose without contacting the copyright holder is strictly prohibited.
Todd Schorr's Website 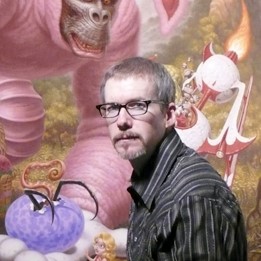 Todd Schorr is an American artist and member of the "Lowbrow" art movement or pop surrealism. Combining a cartoon influenced visual vocabulary with a highly polished technical ability, based on the exacting painting methods of the Old Masters, Schorr weaves intricate narratives that are often biting yet humorous in their commentary on the human condition.

While growing up as a child in New Jersey, Schorr showed a compulsion for drawing at an early age and was enrolled in Saturday morning art classes by the age of five. Deeply affected by fantasy movies such as the 1933 classic King Kong and the early animated cartoons of Walt Disney and Max Fleischer, their influence along with comic books such as Mad would have a lasting effect on Schorr's developing visual vocabulary.

While visiting the Uffizi gallery in Italy on a trip to Europe in the summer of 1970, Schorr began to formulate his idea of combining his love of cartoons with the techniques of the old masters.

In 1972 he entered the Philadelphia College of Art (now the University of the Arts) wanting to be a painter but was advised to pursue illustration.

Schorr started professional illustration work while still in college, and soon after graduating in 1976, he moved to New York City where he produced work for projects including album covers for AC/DC, movie posters for George Lucas and Francis Ford Coppola, and covers for Time magazine that now reside in the permanent collection of the Smithsonian National Portrait Gallery in Washington, DC.

By 1985 Schorr began making a concentrated effort to break away from illustration and focus on fine art painting. He was invited to show work in the 1986 landmark exhibition American Pop Culture Images Today at the Laforet Museum in Tokyo, Japan, along with notable artists Robert Williams, Suzanne Williams, Neon Park, Bob Zoell, Georganne Deen, Mark Mothersbaugh, Gary Panter, and his wife Kathy Staico Schorr, which in large part galvanized the “Lowbrow” and Pop Surrealism movements. Schorr continued to exhibit in group shows but by the time of his wildly successful first solo show in 1992 at the Tamara Bane Gallery in Los Angeles he had severed all ties to illustration. Schorr and his wife relocated to Los Angeles in 1999. The so-called “Lowbrow” art movement that he and his contemporaries helped form almost 25 years ago is now a global phenomenon.

Schorr's work has been featured in many books and periodicals on the arts including Juxtapoz as well as the documentary film The Treasures of Long Gone John. Three monographs on his work, Secret Mystic Rites (1998), Dreamland (2004), and American Surreal have been published by Last Gasp.

Clash of Holidays caused a scandal when it was exhibited in 2002, when South Florida civil leaders accused Schorr of blasphemy and others raising this as an issue over artistic freedom.

A retrospective for Schorr entitled, Secret Mystic Rites: Todd Schorr Retrospective, was organized by the Art and Culture Center of Hollywood, Florida, on December 14, 2001 - February 17, 2002. A huge controversy immediately ensued due to the museum's invitation for the exhibition which depicted Shorr's Clash of Holidays painting. The "museum managers mailed out about 4000 post cards showing Clash of the Holidays. The outrage started there. Clash of the Holidays depicts...Santa Claus and the Easter Bunny locked in mortal combat. Santa's wielding an ax. The rabbit has a knife. Rudolph the Red-Nosed Reindeer and Baby Jesus, who's munching on an ear from a chocolate rabbit, stand by."

"It was just a joke, really, like lot of my paintings that poke fun at things, comments Schorr, who completed the piece in 2000, then sold it to Courteney Cox of Friends television show fame." Initially, "leaders of Art and Culture Center of Hollywood...had decided to take down the painting that had drawn nasty phone calls, e-mails, and criticism from the City Commission." The controversy died down after meetings between local, state, and museum officials concerning artist's rights, free speech and censorship.

In 2006, a feature-length documentary titled The Treasures of Long Gone John, was released. The film is described as "A chronicle of the eccentric art and musical obsessions of indie record producer and self-described 'anti-mogul,' Long Gone John". The film features Schorr, Long Gone John and other Lowbrow artists as it chronicles the progress of the commissioned painting A Pirate's Treasure Dream using time-lapse photography.

Schorr was given a career retrospective entitled American Surreal at the San Jose Museum of Art in San Jose, CA, from June 20-September 16, 2009. The exhibit covered the entirety of the museum's first-floor exhibit space and showcased Todd's work from the mid-1980s through to his two most recent paintings, The World We Live In and When Fairy Tales Collide, which were finished in early 2009. The retrospective was accompanied by a third book of Schorr's work, also entitled American Surreal, published by Last Gasp.

She Was Charmed By His Outward Appearence (1993)

The Torment Of Sammy Squash Brains (2002)