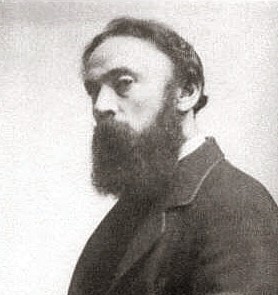 Albert Joseph Moore was an English painter, known for his depictions of languorous female figures set against the luxury and decadence of the classical world.

Moore was born at York on 4 September 1841, the thirteenth son and fourteenth child of well known portrait-painter William Moore and his second wife, Sarah Collingham. Several of his numerous brothers were educated as artists, including Henry Moore, R.A., the well-known sea painter. Albert Moore was educated at Archbishop Holgate's School, and also at St. Peter's School at York, receiving at the same time instruction in drawing and painting from his father. He made such progress that he gained a medal from the Department of Science and Art at Kensington in May 1853, before completing his twelfth year.

His early works shows the influence of Ruskin. In 1859 he was in France with the architect William Eden Nesfield. In 1861, he made a new venture with two sacred subjects, The Mother of Sisera looked out of a Window and Elijah running to Jezreel before Ahab's Chariot. Meanwhile, Moore had given signs of the remarkable skill which he afterwards displayed as a decorative artist. The 1860s saw Moore designing tiles, wallpaper and stained glass for Morris, Marshall, Faulkner and Co., and working as an ecclesiastic and domestic mural painter. During this period his works began to take on a markedly neo-classical character, Moore making an extensive study of antique sculpture, particularly the Elgin marbles in the British Museum. His concern for decorative, color harmonies became apparent in his paintings of the mid 1860s onwards. His works, typically single female figures with formalized proportions, neo-classical drapery and floral accessories, established a major strand of the Aesthetic Movement.

From the mid-1860s onwards, Moore increasingly began to paint works of female figures in differing states of consciousness, often sleep. This can be seen in works ranging from Lilies (1866) to Dreamers (1879–82) to Midsummer (1887). These paintings relate sensory, bodily experience with consciousness itself, in ways aligned with the ideas of contemporary physiological psychologists like George Henry Lewes. Such depictions suggest Moore’s interest in the contemporary science of mind and experience, and he pursued related themes until his death.

Moore was of an independent disposition, and relied solely on his own judgment in matters both social and artistic. His somewhat outspoken views proved a bar to his admission into the ranks of the Royal Academy, for which he was many years a candidate, and where his works were long a chief source of attraction.

Though suffering from a painful and incurable illness, Moore worked up to the last, completing by sheer courage and determination an important picture just before his death, which occurred on 25 September 1893, at 2 Spenser Street, Victoria Street, Westminster. He was buried at Highgate cemetery.

Portrait Of A Girl