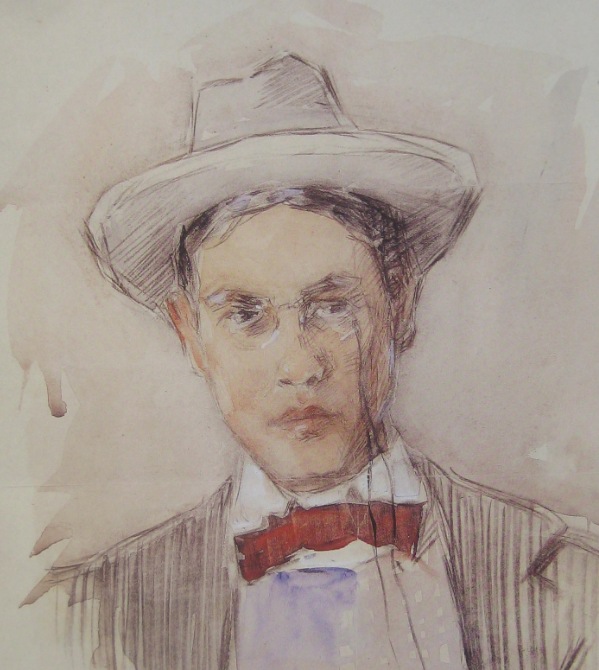 Frederick Carl Frieseke was an American Impressionist painter who spent most of his life as an expatriate in France. An influential member of the Giverny art colony, his paintings often concentrated on various effects of dappled sunlight. He is especially known for painting female subjects, both indoors and out.

In 1858, Frederick Carl Frieseke's grandparents, Frederick Frieseke and his wife, emigrated from Pritzerbe (near Brandenburg, Germany) with their sons, including Herman Carl. They settled in the small central Michigan town of Owosso. Herman served in the Union Army then returned to Owosso, where he established a brick manufacturing business. He married Eva Graham and in 1871 their daughter Edith was born. Their son, Frederick Carl, was born in Owosso in 1874. Eva died in 1880 when Frederick was six years old, and in about 1881 the family moved to Florida. Herman started another brick manufacturing business in Jacksonville. The four years in Florida left an enduring impression on young Frederick; years later, when he contemplated a return to the United States from Europe, he concentrated on Florida.

Frederick's aunt recounted how, unlike most boys, he was interested in the arts more than in sports. His grandmother, Valetta Gould Graham, enjoyed painting, and encouraged Frederick in his artistic pursuits. An 1893 visit to the World's Columbian Exposition in Chicago also stimulated his desire to become an artist.

In 1893, Frieseke graduated from Owosso High School, then began his artistic training at the Art Institute of Chicago, studying with Frederick Warren Freer and John Vanderpoel. After moving to New York in 1895, he resumed his art education at the Art Students League in 1897. He worked as an illustrator, selling cartoons he had drawn to The New York Times, Puck, and Truth. He claimed that he might have curtailed his art education if he had been more successful in that endeavor. The following year, he moved to France, where he would remain, except for short visits to the United States and elsewhere, as an expatriate for the rest of his life. He did continue his education, enrolling at the Académie Julian in Paris, studying under Jean-Joseph Benjamin-Constant and Jean-Paul Laurens, and receiving criticism from Auguste Joseph Delécluse. His studies also included some time at Académie Carmen under James Abbott McNeill Whistler. Frieseke visited Holland, including the Katwijk and Laren artist colonies, in the summer of 1898. During this time he sketched and painted in watercolors, and he initially planned to make that his specialty, but he was encouraged by Académie Carmen instructor Frederick William MacMonnies to work in oils.

Starting in 1899, just over a year since his arrival in Paris, Frieseke exhibited at the Salon of the Société Nationale des Beaux-Arts.

Whistler's influence is evident in Frieseke's early mature paintings, with close tonalities. By his post-1900 work, his palette had evolved toward that of the Impressionists, becoming light and colorful; however, he still retained the strong linear customs of art back in the United States.

In the summer of 1905, he spent at least a month in the Giverny art colony. In October of that year he married Sarah Anne O'Bryan (known as Sadie), whom he had met seven years earlier. Frieseke and his wife (and later, their daughter) spent every summer from 1906 to 1919 in Giverny. He kept a Paris apartment and studio throughout his life, and the Friesekes spent the winters in Paris. Their Giverny house, previously the residence of Theodore Robinson, was next door to Claude Monet's. Despite the proximity, Frieseke did not become close friends with Monet, nor was Monet an artistic influence. He said in an interview, "No artist in [the impressionist] school has influenced me except, perhaps, Renoir." Indeed, Frieseke's paintings of sensually rounded figures often bear a resemblance to those of Pierre-Auguste Renoir.

After spending some time in Giverny, his unique style quickly emerged, and he would be quite influential with most of the other members of the colony. Although well known as an Impressionist, some of his work, with its "intense, almost arbitrary colors", demonstrates the Post-Impressionist influence of artists Paul Gauguin and Pierre Bonnard. The term "Decorative Impressionism" was coined by an art writer to refer to Frieseke's style. It combined the decorative style of Les Nabis, expressively using color and pattern, with classic Impressionist interests in atmosphere and sunlight.

He was very interested in rendering sunlit subjects on canvas, saying, "It is sunshine, flowers in sunshine; girls in sunshine; the nude in sunshine, which I have been principally interested in. If I could only reproduce it exactly as I see it I would be satisfied." However, his interpretation of sunshine often did not appear natural. According to a recent observer, "His light hardly seems to be plein air light at all. In fact it seems entirely artificial ... a stunning concoction of blues and magentas frosted with early summer green and flecks of white."

The Friesekes' only child, daughter Frances, was born in 1914. In 1920 Frieseke and his family moved to a farm in Le Mesnil-sur-Blangy, Normandy. His art of this period concentrated on female figures, particularly nudes. While developing a more modern style, he included historical and contemporary references. He used a darker color palette and limited his use of surface patterns. In these works, his interest in chiaroscuro may be discerned.

In 1923 he left the Salon of the Société Nationale des Beaux-Arts and co-founded, with other artists, the Salon des Tuileries. He resumed painting in watercolors, especially while on trips to Nice in the winter and during a 1930 to 1932 visit to Switzerland.

Frieseke had established a superb reputation during his career. A 1931 book refers to Frieseke as "one of the most prominent members of our self-exiled Americans." He died in his Normandy home on August 24, 1939, of an aneurysm. 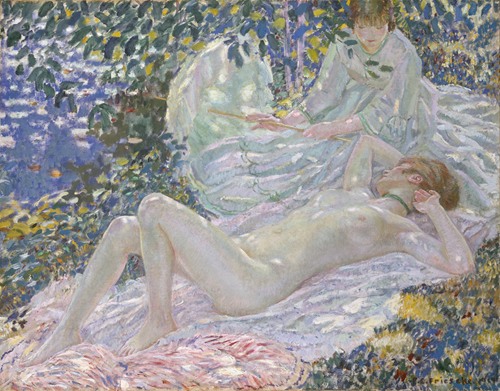 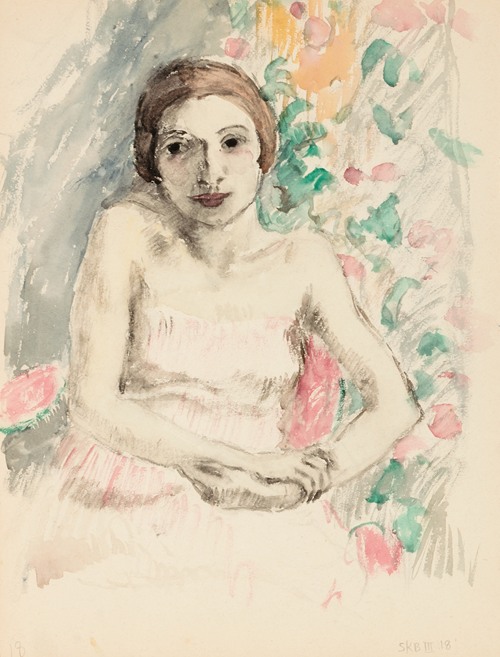 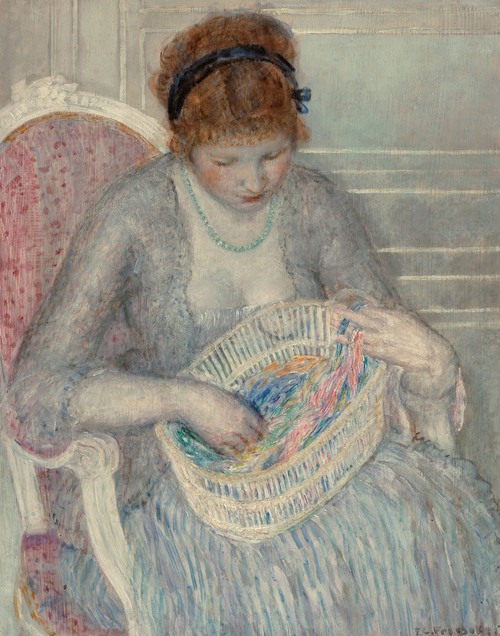 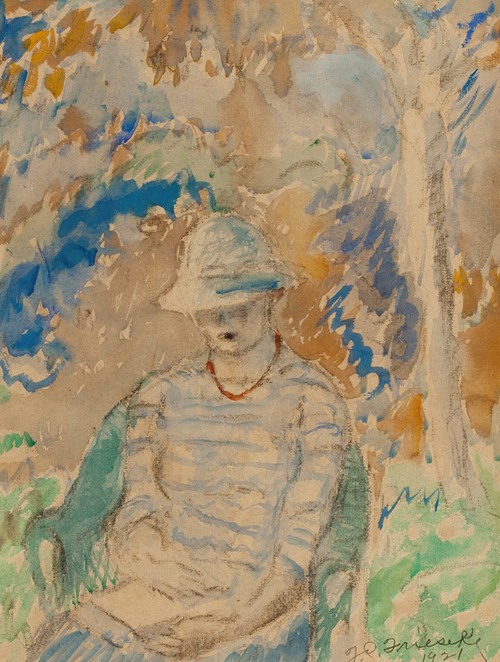 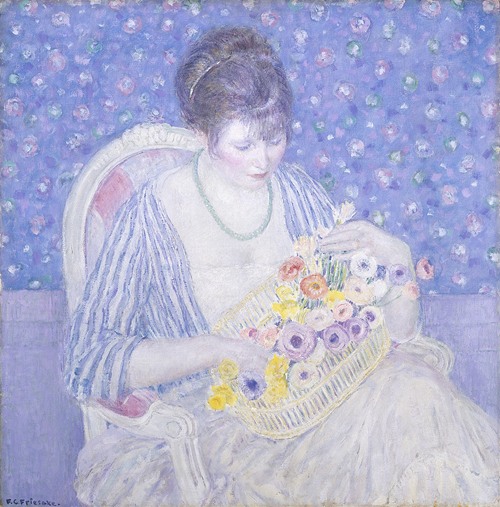 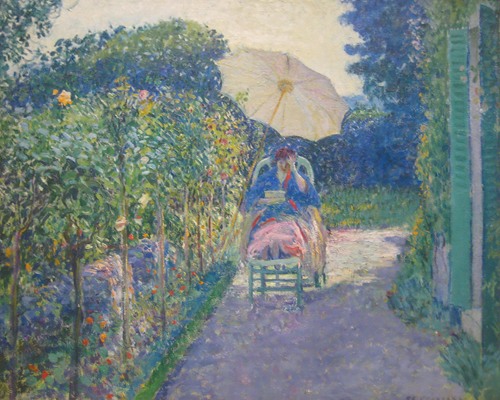 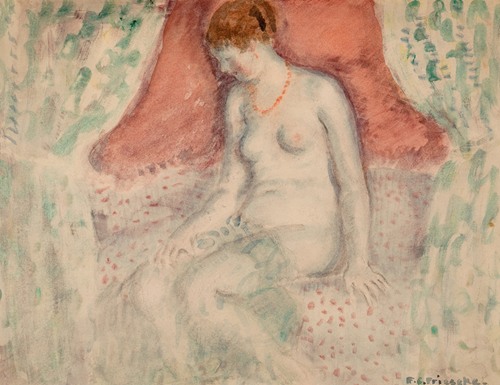 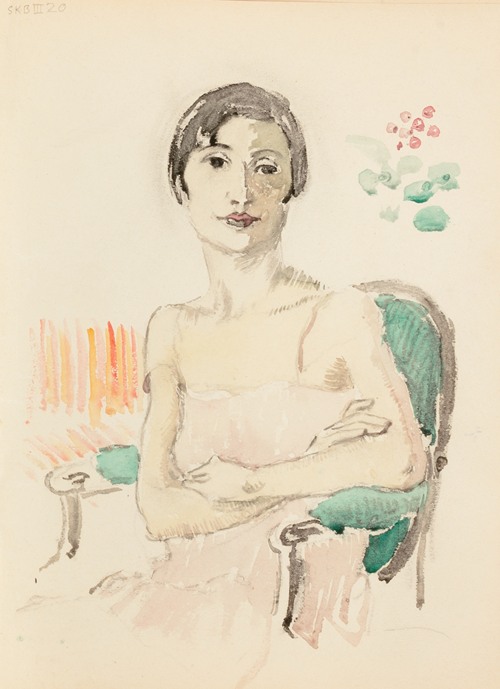