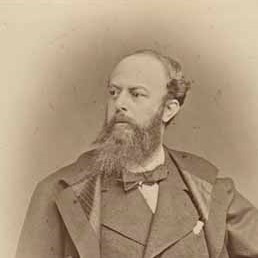 Christian Jank was a scenic painter and stage designer.

Jank was born in Munich, the Bavarian capital. Here he originally worked as a scenic painter. Among other things he was involved in the scenery for Richard Wagner's opera Lohengrin.

His work piqued the interest of Ludwig II, who commissioned him to create concepts for his architectural projects inspired by Wagner. Jank's historistic drafts were the basis for Neuschwanstein Castle, which was built starting in 1869 by Eduard Riedel and later Georg von Dollmann. Jank was also involved in the interior of Linderhof Palace. His concepts for Falkenstein Castle could not be realized, as the project was abandoned after the king's death in 1886.

Venice, a View of Santi Giovanni e Paolo from the Back