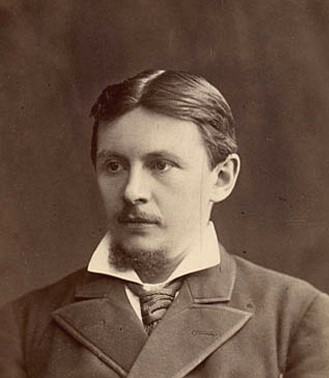 Julius Sergius von Klever was a Baltic German landscape painter.
His father was a chemist who taught pharmacology at the Veterinary Institute. He displayed artistic talent at an early age and took lessons from Konstantin von Kügelgen. After completing his primary education, was enrolled at the Imperial Academy of Fine Arts where, at his father's insistence, he studied architecture. After a short time, however, he began to take landscape painting classes; first with Sokrat Vorobiev, then Mikhail Clodt.

In 1870, he was apparently expelled from the Academy, for unknown reasons. Undeterred, he started exhibiting his works. In 1871, one was purchased by Count Pavel Stroganov [ru] and, the following year, his painting. "Sunset", was acquired by Grand Duchess Maria Nikolaevna. In 1874, he had his first solo exhibition at the Imperial Society for the Encouragement of the Arts. After Tsar Alexander II expressed interest in his work, he was named an "Artist" by the Academy, despite having not graduated. In 1878, he became an "Academician".

In 1879, he and the actor Vasily Samoylov (who was an amateur painter) spent some time working on Nargen island. The resulting works were purchased by Pavel Tretyakov and the Imperial Family, including Tsar Alexander III. Following this, the Academy named him a Professor. In 1885, he helped organize the Russian exhibit at the Exposition Universelle d'Anvers.

During this time, he was overwhelmed with orders and often completed a painting in a single day. He sometimes employed assistants to do the underpainting. Their identities and the extent of their contributions has not been fully established.

In the late 1890s, a friend of his from the Academy was implicated in a scandal involving gambling and embezzlement. He was drawn into it and suffered a nervous breakdown that forced him to give up painting temporarily. In 1908, he went to Germany with his family to avoid the situation and lived in Neustrelitz until 1915, when the war forced him to return home.

After the Revolution, he began receiving support from the "Society of Artists [ru]". For the rest of his life, he taught at the Academy (under its successive new Soviet names) and at the Art and Industry Academy, where he headed the department of "monumental" painting.

Winter on the Baltic Coast

Winter Landscape With Birch In The Evening Light