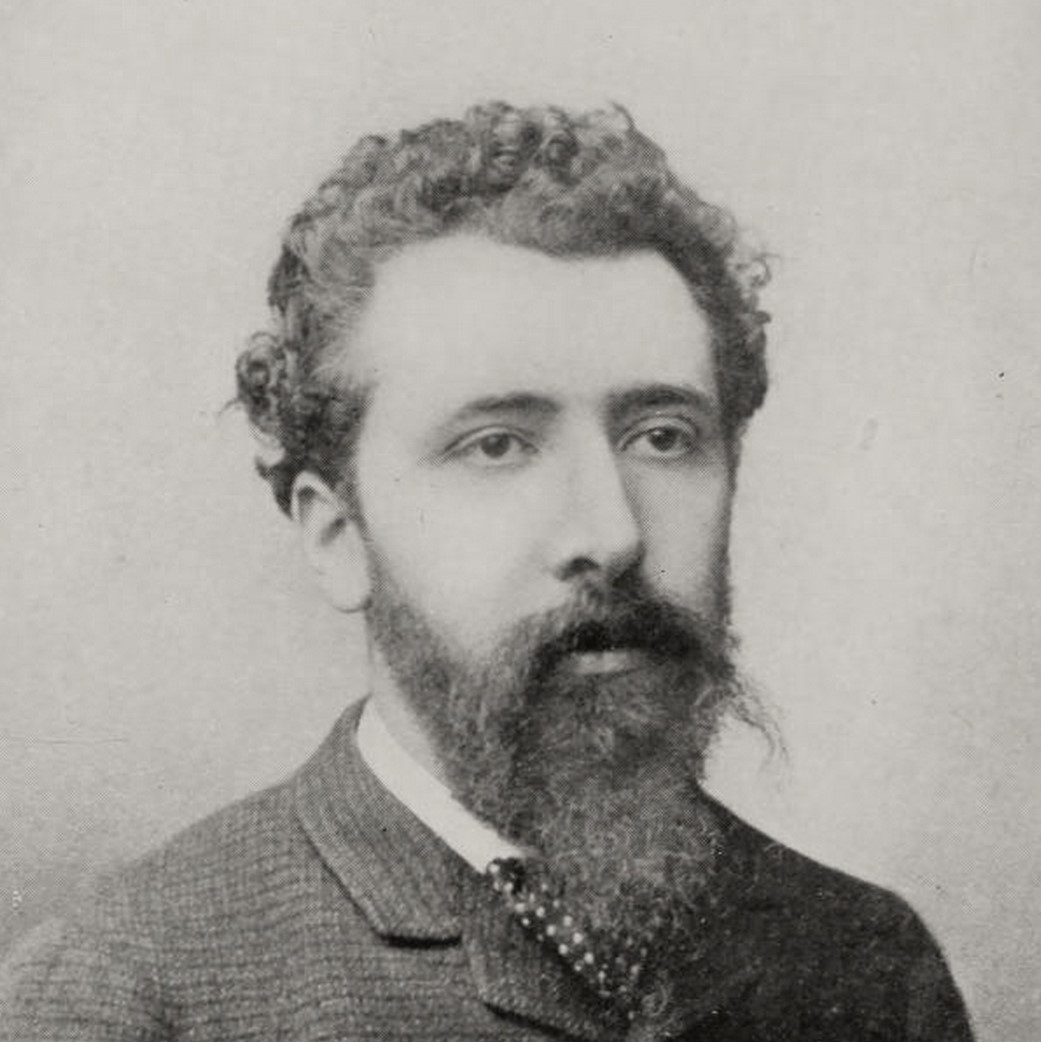 Georges Pierre Seurat was a French post-Impressionist artist. He is best known for devising the painting techniques known as chromoluminarism as well as pointillism. While less famous than his paintings, Seurat's conté crayon drawings have also garnered a great deal of critical appreciation.

Seurat's artistic personality combined qualities that are usually supposed to be opposed and incompatible: on the one hand, his extreme and delicate sensibility, on the other, a passion for logical abstraction and an almost mathematical precision of mind. His large-scale work A Sunday Afternoon on the Island of La Grande Jatte (1884–1886) altered the direction of modern art by initiating Neo-impressionism, and is one of the icons of late 19th-century painting.

Seurat was born on 2 December 1859 in Paris, at 60 rue de Bondy (now rue René Boulanger). The Seurat family moved to 136 boulevard de Magenta (now 110 boulevard de Magenta) in 1862 or 1863. His father, Antoine Chrysostome Seurat, originally from Champagne, was a former legal official who had become wealthy from speculating in property, and his mother, Ernestine Faivre, was from Paris. Georges had a brother, Émile Augustin, and a sister, Marie-Berthe, both older. His father lived in Le Raincy and visited his wife and children once a week at boulevard de Magenta.

Georges Seurat first studied art at the École Municipale de Sculpture et Dessin, near his family's home in the boulevard Magenta, which was run by the sculptor Justin Lequien. In 1878 he moved on to the École des Beaux-Arts where he was taught by Henri Lehmann, and followed a conventional academic training, drawing from casts of antique sculpture and copying drawings by old masters. Seurat's studies resulted in a well-considered and fertile theory of contrasts: a theory to which all his work was thereafter subjected. His formal artistic education came to an end in November 1879, when he left the École des Beaux-Arts for a year of military service.

After a year at the Brest Military Academy, he returned to Paris where he shared a studio with his friend Aman-Jean, while also renting a small apartment at 16 rue de Chabrol. For the next two years, he worked at mastering the art of monochrome drawing. His first exhibited work, shown at the Salon, of 1883, was a Conté crayon drawing of Aman-Jean. He also studied the works of Eugène Delacroix carefully, making notes on his use of color.

He spent 1883 working on his first major painting—a large canvas titled Bathers at Asnières, a monumental work showing young men relaxing by the Seine in a working-class suburb of Paris. Although influenced in its use of color and light tone by Impressionism, the painting with its smooth, simplified textures and carefully outlined, rather sculptural figures, shows the continuing impact of his neoclassical training; the critic Paul Alexis described it as a "faux Puvis de Chavannes". Seurat also departed from the Impressionist ideal by preparing for the work with a number of drawings and oil sketches before starting on the canvas in his studio.

Bathers at Asnières was rejected by the Paris Salon, and instead he showed it at the Groupe des Artistes Indépendants in May 1884. Soon, however, disillusioned by the poor organization of the Indépendants, Seurat and some other artists he had met through the group – including Charles Angrand, Henri-Edmond Cross, Albert Dubois-Pillet and Paul Signac – set up a new organization, the Société des Artistes Indépendants. Seurat's new ideas on pointillism were to have an especially strong influence on Signac, who subsequently painted in the same idiom.

In summer 1884, Seurat began work on A Sunday Afternoon on the Island of La Grande Jatte.

The painting shows members of each of the social classes participating in various park activities. The tiny juxtaposed dots of multi-colored paint allow the viewer's eye to blend colors optically, rather than having the colors physically blended on the canvas. It took Seurat two years to complete this 10-foot-wide (3.0 m) painting, much of which he spent in the park sketching in preparation for the work (there are about 60 studies). It is now in the permanent collection of the Art Institute of Chicago.

Seurat made several studies for the large painting including a smaller version, Study for A Sunday Afternoon on the Island of La Grande Jatte (1884–1885), now in the collection of the Metropolitan Museum of Art, in New York City.

The painting was the inspiration for James Lapine and Stephen Sondheim's musical Sunday in the Park with George.

Seurat concealed his relationship with Madeleine Knobloch (or Madeleine Knoblock, 1868–1903), an artist's model whom he portrayed in his painting Jeune femme se poudrant. In 1889 she moved in with Seurat in his studio on the seventh floor of 128 bis Boulevard de Clichy.

When Madeleine became pregnant, the couple moved to a studio at 39 passage de l'Élysée-des-Beaux-Arts (now rue André Antoine). There she gave birth to their son, who was named Pierre-Georges, 16 February 1890.

Seurat spent the summer of 1890 on the coast at Gravelines, where he painted four canvases including The Channel of Gravelines, Petit Fort Philippe, as well as eight oil panels, and made a few drawings.

Seurat died in Paris in his parents' home on 29 March 1891 at the age of 31. The cause of his death is uncertain, and has been variously attributed to a form of meningitis, pneumonia, infectious angina, and diphtheria. His son died two weeks later from the same disease. His last ambitious work, The Circus, was left unfinished at the time of his death.

On 30 March 1891 a commemorative service was held in the church of Saint-Vincent-de-Paul. Seurat was interred 31 March 1891 at Cimetière du Père-Lachaise.

At the time of Seurat's death, Madeleine was pregnant with a second child who died during or shortly after birth. 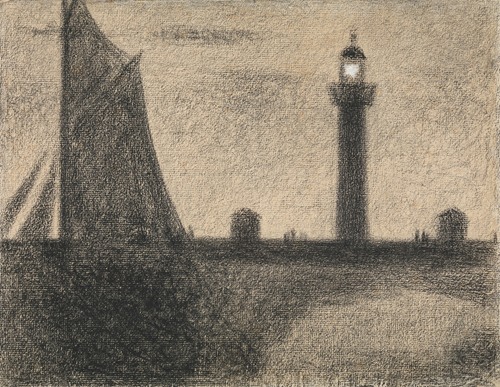 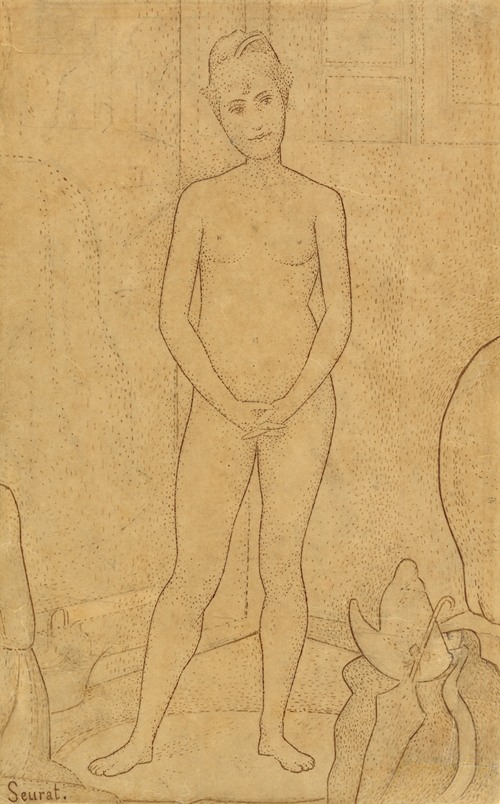 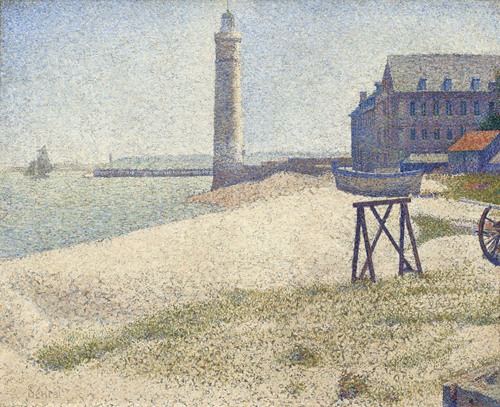 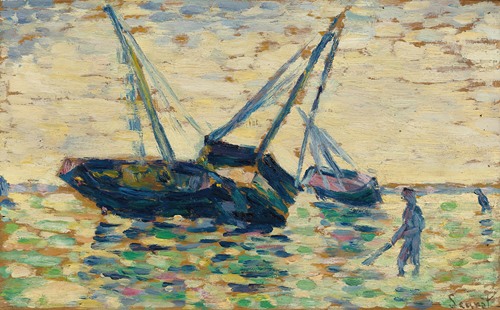 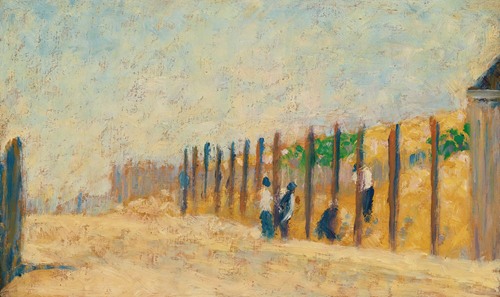 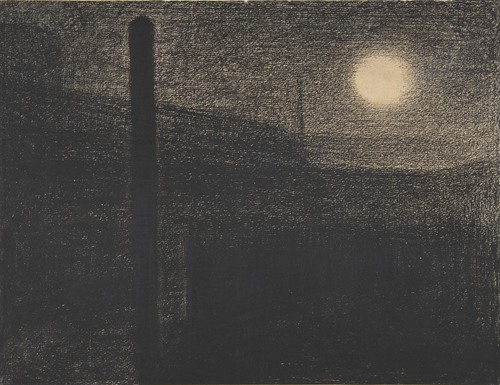 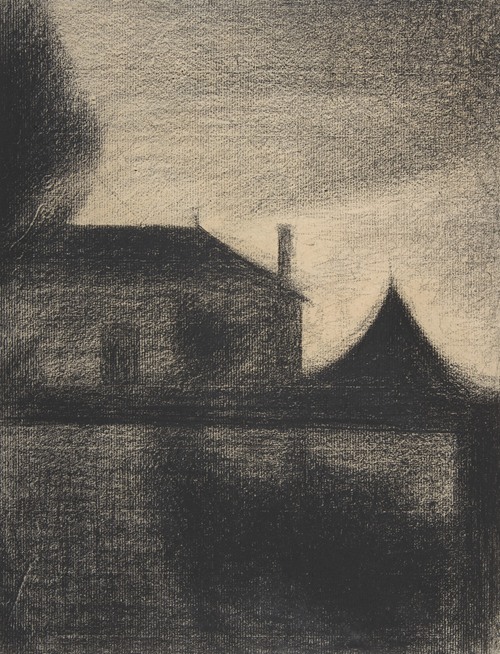 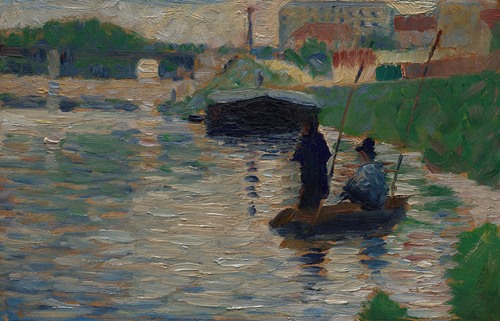