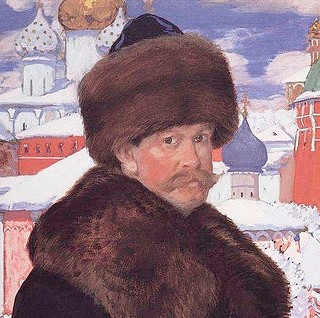 Boris Mikhaylovich Kustodiev was a Russian and Soviet painter and stage designer.
Boris Kustodiev was born in Astrakhan into the family of a professor of philosophy, history of literature, and logic at the local theological seminary. His father died young, and all financial and material burdens fell on his mother's shoulders. The Kustodiev family rented a small wing in a rich merchant's house. It was there that the boy's first impressions were formed of the way of life of the provincial merchant class. The artist later wrote, "The whole tenor of the rich and plentiful merchant way of life was there right under my nose... It was like something out of an Ostrovsky play." The artist retained these childhood observations for years, recreating them later in oils and water-colours.

Between 1893 and 1896, Kustodiev studied in theological seminary and took private art lessons in Astrakhan from Pavel Vlasov, a pupil of Vasily Perov. Subsequently, from 1896 to 1903, he attended Ilya Repin’s studio at the Imperial Academy of Arts in St. Petersburg. Concurrently, he took classes in sculpture under Dmitry Stelletsky and in etching under Vasiliy Mate. He first exhibited in 1896.

He visited France and Spain on a grant from the Imperial Academy of Arts in 1904. Also in 1904, he attended the private studio of René Ménard in Paris. After that he traveled to Spain, then, in 1907, to Italy, and in 1909 he visited Austria and Germany, and again France and Italy. During these years he painted many portraits and genre pieces. However, no matter where Kustodiev happened to be – in sunny Seville or in the park at Versailles – he felt the irresistible pull of his motherland. After five months in France he returned to Russia, writing with evident joy to his friend Mate that he was back once more "in our blessed Russian land".

The Russian Revolution of 1905, which shook the foundations of society, evoked a vivid response in the artist's soul. He contributed to the satirical journals Zhupel (Bugbear) and Adskaya Pochta (Hell’s Mail). At that time, he first met the artists of Mir Iskusstva (World of Art), the group of innovative Russian artists. He joined their association in 1910 and subsequently took part in all their exhibitions.

In 1905, Kustodiev first turned to book illustrating, a genre in which he worked throughout his entire life. He illustrated many works of classical Russian literature, including Nikolai Gogol's Dead Souls, The Carriage, and The Overcoat; Mikhail Lermontov's The Lay of Tsar Ivan Vasilyevich, His Young Oprichnik and the Stouthearted Merchant Kalashnikov; and Leo Tolstoy's How the Devil Stole the Peasants Hunk of Bread and The Candle.

In 1909, he was elected into Imperial Academy of Arts. He continued to work intensively, but a grave illness—tuberculosis of the spine—required urgent attention. On the advice of his doctors he went to Switzerland, where he spent a year undergoing treatment in a private clinic. He pined for his distant homeland, and Russian themes continued to provide the basic material for the works he painted during that year. In 1918, he painted The Merchant's Wife, which became the most famous of his paintings.

In 1916, he became paraplegic. "Now my whole world is my room", he wrote. His ability to remain joyful and lively despite his paralysis amazed others. His colourful paintings and joyful genre pieces do not reveal his physical suffering, and on the contrary give the impression of a carefree and cheerful life.

His Pancake Tuesday/Maslenitsa (1916) and Fontanka (1916) are all painted from his memories. He meticulously restores his own childhood in the busy city on the Volga banks.

In the first years after the Russian Revolution of 1917 the artist worked with great inspiration in various fields. Contemporary themes became the basis for his work, being embodied in drawings for calendars and book covers, and in illustrations and sketches of street decorations, as well as some portraits (Portrait of Countess Grabowska).

His covers for the journals The Red Cornfield and Red Panorama attracted attention because of their vividness and the sharpness of their subject matter. Kustodiev also worked in lithography, illustrating works by Nekrasov. His illustrations for Leskov's stories The Darner and Lady Macbeth of the Mtsensk District were landmarks in the history of Russian book designing, so well did they correspond to the literary images.

The artist was also interested in designing stage scenery. He first started work in the theatre in 1911, when he designed the sets for Alexander Ostrovsky's An Ardent Heart. Such was his success that further orders came pouring in. In 1913, he designed the sets and costumes for The Death of Pazukhin at the Moscow Art Theatre.

His talent in this sphere was especially apparent in his work for Ostrovsky's plays; It's a Family Affair, A Stroke of Luck, Wolves and Sheep, and The Storm. The milieu of Ostrovsky's plays—provincial life and the world of the merchant class—was close to Kustodiev's own genre paintings, and he worked easily and quickly on the stage sets.

In 1923, Kustodiev joined the Association of Artists of Revolutionary Russia. He continued to paint, make engravings, illustrate books, and design for the theater up until his death of tuberculosis on 28 May 1927, in Leningrad.

Design For The Spectators In The Power Of The Fiend ( 1919)