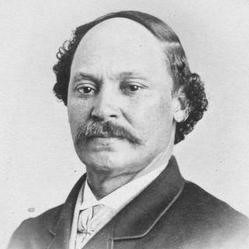 Robert Seldon Duncanson was a nineteenth century American artist of European and African ancestry known for his contributions to landscape painting. Inspired by famous American landscape artists like Thomas Cole, Duncanson created renowned landscape paintings and is considered a second generation Hudson River School artist. Duncanson spent the majority of his career in Cincinnati, Ohio and helped develop the Ohio River Valley landscape tradition. As a free black man in antebellum America, Duncanson utilized the white abolitionist community in America and England to support and promote his work.

Duncanson is considered the first African-American artist to be internationally known. He operated in the elite cultural circles of Cincinnati, Detroit, Montreal, and London. The primary art historical debate centered on Duncanson concerns the role that contemporary racial issues played in his work. Some art historians, like Joseph D. Ketner, believe that Duncanson used racial metaphors in his artwork, while others, like Margaret Rose Vendryes, discourage viewers from approaching his art with a racialized perspective.

Landscape with Cows Watering in a Stream (1871)