Prentiss Taylor was an American illustrator, lithographer, and painter. Born in Washington D.C., Taylor began his art studies at the Corcoran Gallery of Art, followed by painting classes under Charles Hawthorne in Provincetown, Massachusetts, and training at the Art Students League in New York City. In 1931, Taylor began studying lithography at the League. Taylor interacted and collaborated with many writers and musicians in his time in New York in the late 1920s and early 30s. This was in the emergence of the Harlem Renaissance. Among his close friends and colleagues were Langston Hughes and Carl Van Vechten.

Born on December 13, 1907 at home to John Eastlack Taylor and Beatrice Hottel. His birth assisted by his grandmother's cook, known as Cookie Belle. In high school, Prentiss graduated from McKinley "Tech" High School, where he had studied art under Mary P. Shipman, Alexis Manny and Charles Lamb. He graduated from Sidwell Friends School in 1925.

In the 1920s, Taylor studied painting with Charles W. Hawthorne in Provincetown, Massachusetts, but turned to lithography in the late 1920s to early 1930s during his enrollment at the Art Students League in New York City. He received further training in that medium at the George C. Miller workshop in New York. During this period, he also designed costumes for the American-Oriental Revue, as well as designed scenery for plays at the Arts Club of Washington.

Prentiss established the Washington Wheat Press as a means for publishing, and within the paper were various poems and illustrations by the artist as well as poems and prose by Josiah Titzell, Rachel Field and Laura Benet. After Taylor discovered lithographing in 1931, he worked primarily in the printmaking medium for the rest of his life, experimenting with various techniques and compositions and ultimately achieving a status as one this country's great lithographers. Taylor depicted mostly realistic and narrative scenes of subjects and themes that reflected his personal interests in music, architecture, religion and social justice.

In 1990, Taylor had his last exhibition while still alive at Georgetown University in their Lauinger Library called "The Art of Prentiss Taylor", which included lithographs, watercolor paintings and book jacket designs. In 1991, Taylor's health began deteriorating. In April, (age 83) he was put in a nursing home and was hospitalized in September due to a pneumonia and a heart infection. Prentiss Taylor died on October 7, 1991. 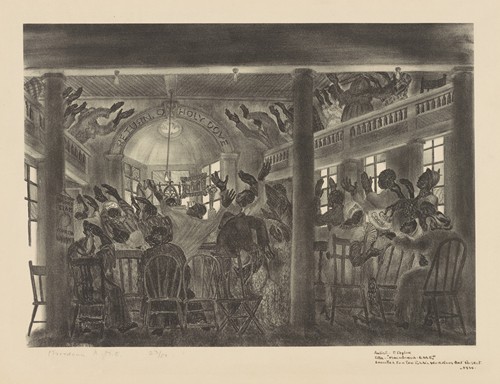