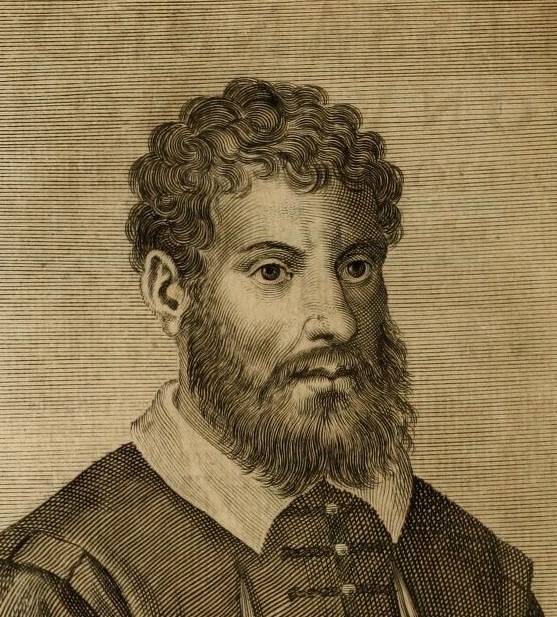 Alessandro Bonvicino (also Buonvicino), more commonly known as Moretto, or in Italian Il Moretto da Brescia (the Moor of Brescia), was an Italian Renaissance painter from Brescia, where he also mostly worked. His dated works span the period from 1524 to 1554, but he was already described as a master in 1516. He was mainly a painter of altarpieces that tend towards sedateness, mostly for churches in and around Brescia, but also in Bergamo, Milan, Verona and Asola; many remain in the churches they were painted for. Most are on canvas, but a number even of large ones are on wood panel. Only a handful of drawings survive.

He also painted a few portraits, but these are more influential. A full-length Portrait of a Man in the National Gallery, London, dated 1526, seems to be the earliest Italian independent portrait at full-length, all the more unexpected as the "sitter", though clearly a wealthy nobleman, shows no sign of being from a princely ruling family. This format, and the background of an exterior largely closed off by a column the man leans on, was taken up by his main assistant Giovanni Battista Moroni, who mainly painted portraits, and was one of the most important portraitists of the mid-16th century.

He was a prominent and pious citizen of the small city of Brescia, belonging to at least two of the most prominent confraternities.

He was born at Rovato, in Brescian territory, and studied first under Fioravante Ferramola. Others state he trained with Vincenzo Foppa. His brothers Pietro and Jacopo were also painters. He may have apprenticed with Titian in Venice and modelled his earlier portrait-painting on the Venetian style. On the other hand, the style also resembles that of Giorgione or late Bellini. He conceived a great enthusiasm for Raphael, though he never traveled to Rome; on the other hand, his classical serenity resembles that shown by Leonardo and his followers in Lombardy such as Bramantino. He may have consulted with his contemporary Girolamo Savoldo. Moretto excelled more in sedate altarpieces than in narrative action, and more in oil painting than in fresco, although he painted fine frescoes depicting the lollygagging daughters of Count Martinengo in one of the palaces near Brescia. In 1521, he worked with Girolamo Romanino in the Cappella del Sacramento in the Old Cathedral of Brescia, where Moretto completed a Last Supper, Elijah in the Desert, and a Fall of Manna. He was active during 1522–1524 in Padua.

In the Kunsthistorisches Museum, Vienna is a St Justina (once ascribed to Il Pordenone); in the Staedel Museum, Frankfurt, the Madonna Enthroned between Sts. Anthony and Sebastian; in the Berlin Museum, a colossal Adoration of the Shepherds, and a large votive picture (one of the master's best) of the Madonna and Child, with infant angels and other figures above the clouds, and below, amid a rich landscape, two priests; in the National Gallery, Central London, is a St. Bernardin and Other Saints. Throughout his career his works display an internal oscillation between the traditions of the Venetian and Central Italian schools. Simultaneously he looked at the form and colour of Venetian artists such as Titian and Palma the Elder whilst his classicising, sweet intensity earned him the name "Raphael of Brescia". Though there is some uncertainty regarding his studio, he took on a number of pupils, the most important of whom was the portraitist Giovanni Battista Moroni. He also influenced Callisto Piazza.

Il Moretto was stated to have been a man of great personal piety, preparing himself by prayer and fasting for any great act of sacred art, such as the painting of the Virgin-mother.

St. John the Baptist in the Wilderness (circa 1535)

The Holy Family in a landscape

Madonna And Child With A Dog