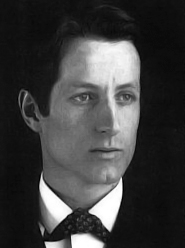 Bellerophon at the Fountain of Pirene (1910)

It will be sufficient to break off a branch and carry it to plant in your garden. (1909)