Louise Moillon was a French still life painter in the Baroque era. It is recorded that she became known as one of the best still life painters of her time, as her work was purchased by King Charles I of England, as well as French nobility. Louise Moillon is also known for her Flemish style that is present in her artwork. Moillon created about 40 artworks during her lifetime which are held in museums and private collections.

Moillon was born into a strict Calvinist family in Paris in 1610. She grew up in St–Germain-des-Prés district of Paris, a district known as a safe haven for religiously persecuted Protestant refugees primarily from the southern Netherlands. This district was also known for its collection of traditional Netherlandish painters who could have attributed to the development of Moillon's painting style. Louise lived during the Baroque era of painting: a time where still-life painting was beginning to grow and thrive. However, still-life paintings especially thrived in the art market in Holland, and did not control the art market in France where Moillon resided. Louise Moillon had six siblings, one of whom was also a painter named Isaac Moillon, who obtained his education from the French Royal Academy of Painting and Sculpture. Her father, Nicolas Moillon, was a landscape and portrait painter, art dealer, and member of the Académie de St Luc. Moillon's mother, Marie Gilbert, was a daughter of a goldsmith. Moillon learned the basics of painting from her father, however he died when she was young. The following year, Moillon's mother remarried another painter and art dealer, Francois Garnier. Garnier continued to give Moillon lessons and expanded her art education although it is thought other people were instrumental in Moillon's art education.

Louise Moillon married a timber merchant, Etienne Girardot, in the 1640s and did not paint as frequently after her marriage. She did not have any children of her own. The Revocation Edict of Nantes in 1685 discriminated on any religion other than Catholicism, forcing citizens of France to convert to Catholicism and Louise's family was greatly affected.It is thought Moillon's husband was sent to prison after he refused to convert to Catholicism. After the revocation, no records of Louise producing work have been found. Louise died in France in 1696 and was given a Catholic burial. 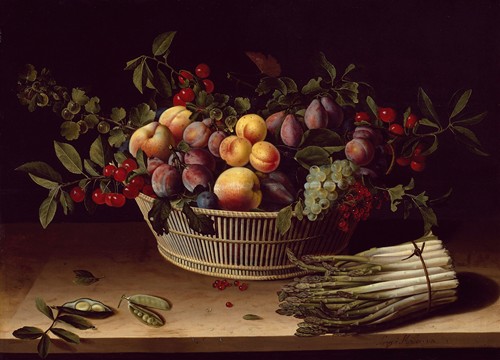 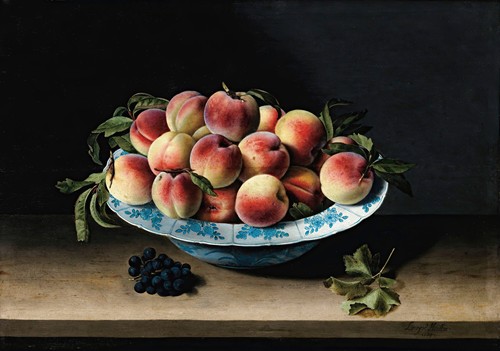 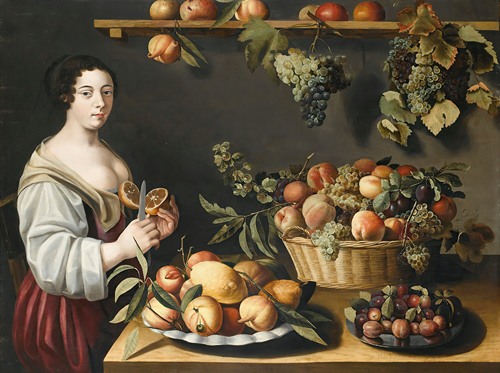 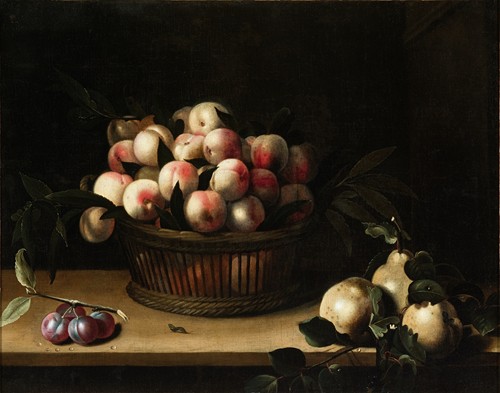 Basket of Peaches, with Quinces, and Plums (after 1641)