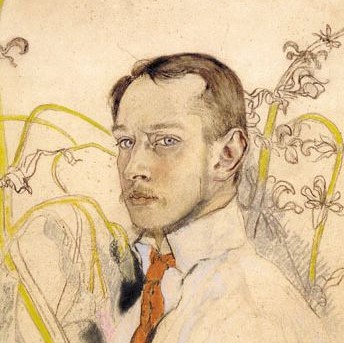 Kazimierz Sichulski was a Polish painter, lithographer and caricaturist; associated with the Young Poland movement. His work was part of the painting event in the art competition at the 1928 Summer Olympics.

His father was a railway engineer, who died while Kazimierz was still a small child. For a short time, he studied law at the University of Lviv, but did not return there after serving his mandatory stint with the Austro-Hungarian Army. From 1900 to 1908, he studied at the Kraków Academy of Fine Arts under Leon Wyczółkowski, Józef Mehoffer and Stanisław Wyspiański. He received a scholarship and continued his studies in Rome, Munich and Paris at the Académie Colarossi. During this time, he married an actress named Bronisława Rudlicka (1875–1920).

He made his début in 1903 at a showing of the Kraków Society of Friends of Fine Arts. From then until 1905, he also worked as a cartoonist for the short-lived satirical magazine, Liberum Veto. In 1905, he became one of the founding members of the artistic circle at the Zielony Balonik (Green Balloon) cabaret and joined the Society of Polish Artists "Sztuka". While visiting Vienna, he joined the Hagenbund and was a member until 1921.

In 1905, he and some fellow artists also paid a visit to Huculszczyzna [pl]; home of the Hutsuls. This resulted in a lifetime fascination with their culture and customs. Some of his best-known paintings are depictions of their folk costumes.

During World War I, he fought in the Polish Legions as the commander of an artillery platoon. He also worked at the Supreme National Committee and served as an artist for the 3rd Battalion. Later, he became a warrant officer in the Austrian Army, serving at the Ministry of Defense. In 1916, his childless marriage ended in divorce and he remarried into a noble family.

From 1920 to 1930, he was a teacher at the State Industrial School [uk] in Lviv then, from 1930 to 1939, taught at his alma mater in Kraków; becoming a Professor in 1937. The following year, he was awarded the "Golden Laurel" by the Polish Academy of Literature for his contributions to Polish art.

After the Occupation of Poland he lost his position and his health began to deteriorate. He died at home of heart disease after a brief stay in the hospital.