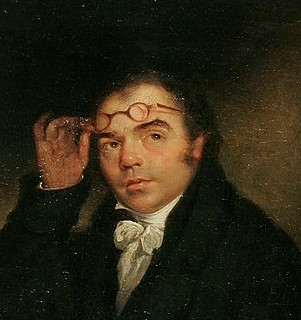 John Crome was an English landscape artist of the Romantic era, one of the principal artists and founding members of the Norwich School of painters. He lived in Norwich for all his life and most of his works are Norfolk landscapes.

He was known as Old Crome to distinguish him from his son John Berney Crome, who was also a well-known artist. His work is in the collections of major galleries, including the Tate Gallery and the Royal Academy in London. He is represented at the Norwich Castle Museum. He produced etchings and taught art.

John Crome was born on 22 December 1768 in Norwich, and baptised on 25 December at St George's Church, Tombland. He was the son of John Crome, a weaver, and his wife Elizabeth. After a period working as an errand boy for a doctor (from the age of 12), he was apprenticed to Francis Whisler, a house, coach and sign painter. At about this time he formed a friendship with Robert Ladbrooke, an apprentice printer, who also became a celebrated landscape painter. The pair shared a room and went on sketching trips in the fields and lanes around Norwich. They occasionally bought prints to copy.

Crome and Ladbrooke sold some of their work to a local printseller, Smith and Jaggars, and it was probably through the print-seller that Crome met Thomas Harvey of Old Catton, who helped him set to up as a drawing teacher. He had access to Harvey's art collection, which allowed him to develop his skills by copying the works of Thomas Gainsborough and Meindert Hobbema. Crome received further instruction and encouragement from the artist John Opie, and the English portraitist William Beechey, whose house in London he frequently visited.

In 1803 Crome and Ladbrooke formed the Norwich Society of Artists, a group that also included Robert Dixon, Charles Hodgson, Daniel Coppin, James Stark and George Vincent. Their first exhibition was in 1805; it marked the start of the Norwich School of painters, the first art movement created outside London. Crome contributed 22 works to its first exhibition, held in 1805. He served as President of the Society several times and held the position at the time of his death. With the exception of the times when he made short visits to London, he had little or no communication with the great artists of his own time. He exhibited 13 works at the Royal Academy between 1806 and 1818. He visited Paris in 1814, following the defeat of Napoleon, and later exhibited views of Paris, Boulogne, and Ostend. Most of his subjects were of scenes in Norfolk.

Crome was drawing master at Norwich School for many years. Several members of the Norwich School art movement were educated at the school and were taught by him, including Stark and Edward Thomas Daniell. He also taught privately, his pupils including members of the influential Gurney family, whom he stayed with whilst in the Lake District in 1802.

He died at his house in Gildengate, Norwich, on 22 April 1821, and was buried in St. George's Church. On his death-bed he is said to have gasped, "Oh Hobbema, my dear Hobbema, how I have loved you". A memorial exhibition of more than 100 of his works was held in November that year by the Norwich Society of Artists.

A Barge with a Wounded Soldier