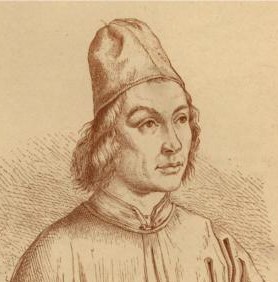 Hans Memling was a painter active in Flanders, who worked in the tradition of Early Netherlandish painting. He was born in the Middle Rhine region, and probably spent his childhood in Mainz. He moved to the Netherlands and spent time in the Brussels workshop of Rogier van der Weyden. He was subsequently made a citizen of Bruges in 1465, where he became one of the leading artists, running a large workshop, which painted religious works that often incorporated donor portraits of his wealthy patrons. Memling's patrons included burghers (bankers, merchants, and politicians), clergymen, and aristocrats.

Memling's portraits built upon the styles that he learned in his youth. He became very successful, and in 1480 was listed among the wealthiest citizens in a city tax list.

He married Anna de Valkenaere sometime between 1470 and 1480, and they had three children. Memling's art was rediscovered, and became very popular, in the 19th century.

He died in Bruges. The trustees of his will appeared before the court of wards at Bruges on 10 December 1495, and records of that date and place indicate Memling left behind several children and considerable property.

Young Man at Prayer with St. William of Maleval (1470)

Madonna and Child with Angels (after 1479)