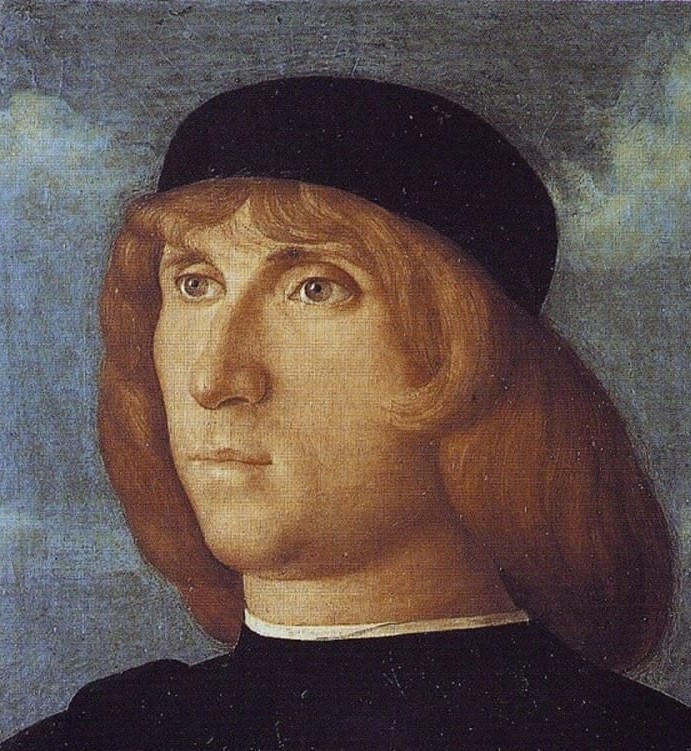 Giovanni Bellini was an Italian Renaissance painter, probably the best known of the Bellini family of Venetian painters. His father was Jacopo Bellini, his brother was Gentile Bellini (who was more highly regarded than Giovanni during his lifetime, although the reverse is true today), and his brother-in-law was Andrea Mantegna. He was considered to have revolutionized Venetian painting, moving it towards a more sensuous and colouristic style. Through the use of clear, slow-drying oil paints, Giovanni created deep, rich tints and detailed shadings. His sumptuous coloring and fluent, atmospheric landscapes had a great effect on the Venetian painting school, especially on his pupils Giorgione and Titian.

Giovanni Bellini was born in Venice. The painter Jacopo Bellini has long been considered Giovanni's father, but the art historian Daniel Wallace Maze has advanced the theory that Jacopo was in fact his elder brother. Giovanni was brought up in Jacopo's house, and always lived and worked in the closest fraternal relation with his brother Gentile. Up until the age of nearly thirty we find in his work a depth of religious feeling and human pathos which is his own. His paintings from the early period are all executed in the old tempera method: the scene is softened by a new and beautiful effect of romantic sunrise color (as, for example, in the St. Jerome in the Desert).

In a changed and more personal manner, he drew Dead Christ pictures (In these days one of the master's most frequent themes e.g. Dead Christ Supported by the Madonna and St. John, or Pietà). with less harshness of contour, a broader treatment of forms and draperies and less force of religious feeling. Giovanni's early works have often been linked both compositionally and stylistically to those of his brother-in-law, Andrea Mantegna.

In 1470 Giovanni received his first appointment to work along with his brother and other artists in the Scuola di San Marco, where among other subjects he was commissioned to paint a Deluge with Noah's Ark. None of the master's works of this kind, whether painted for the various schools or confraternities or for the ducal palace, has survived.

After 1479–1480 much of Giovanni's time and energy must also have been taken up by his duties as conservator of the paintings in the great hall of the Doge's Palace. The importance of this commission can be measured by the payment Giovanni received: he was awarded, first the reversion of a broker's place in the Fondaco dei Tedeschi, and afterwards, as a substitute, a fixed annual pension of eighty ducats. Besides repairing and renewing the works of his predecessors he was commissioned to paint a number of new subjects, six or seven in all, in further illustration of the part played by Venice in the wars of Frederick Barbarossa and the pope. These works, executed with much interruption and delay, were the object of universal admiration while they lasted, but not a trace of them survived the fire of 1577; neither have any other examples of his historical and processional compositions come down, enabling us to compare his manner in such subjects with that of his brother Gentile.

Albrecht Dürer, visiting Venice for a second time in 1506, describes Giovanni Bellini as still the best painter in the city, and as full of all courtesy and generosity towards foreign brethren of the brush.

In 1507 Bellini's brother Gentile died, and Giovanni completed the picture of the Preaching of St. Mark which he had left unfinished; a task on the fulfillment of which the bequest by the elder brother to the younger of their father's sketch-book had been made conditional.

In 1513 Giovanni's position as sole master (since the death of his brother and of Alvise Vivarini) in charge of the paintings in the Hall of the Great Council was threatened by one of his former pupils. Young Titian desired a share of the same undertaking, to be paid for on the same terms. Titian's application was granted, then after a year rescinded, and then after another year or two granted again; and the aged master must no doubt have undergone some annoyance from his sometime pupil's proceedings. In 1514 Giovanni undertook to paint The Feast of the Gods for the duke Alfonso I of Ferrara, but died in 1516.

He was interred in the Basilica di San Giovanni e Paolo, a traditional burial place of the doges.

Madonna and Child with Saints