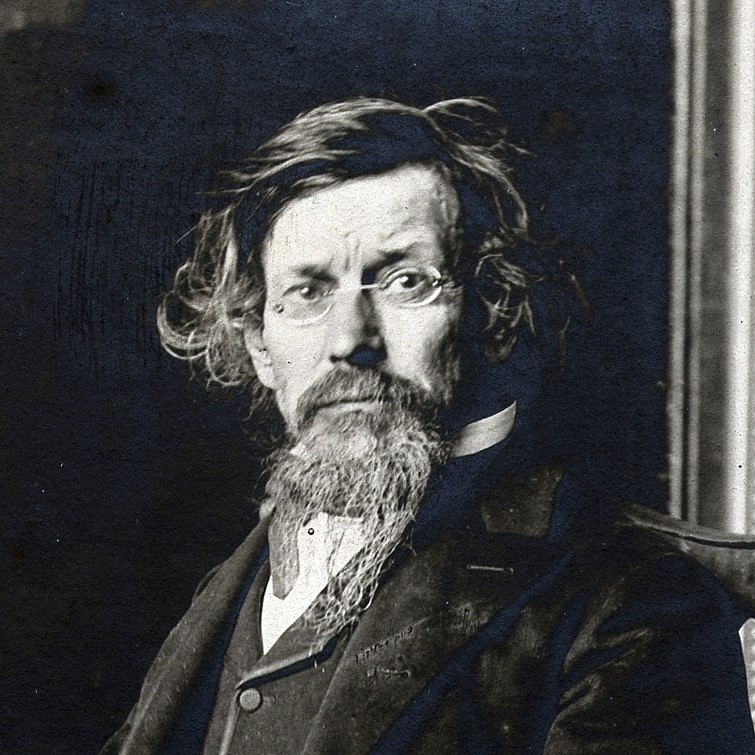 One of the most influential American artists of the nineteenth century, Inness was influenced, in turn, by the Old Masters, the Hudson River school, the Barbizon school, and, finally, the theology of Emanuel Swedenborg, whose spiritualism found vivid expression in the work of Inness's maturity (1879–1894).

Although Inness's style evolved through distinct stages over a prolific career that spanned more than forty years and 1,000 paintings, his works consistently earned acclaim for their powerful, coordinated efforts to elicit depth of mood, atmosphere, and emotion. Neither pure realist nor impressionist, Inness was a transitional figure who intended for his works to combine both the earthly and the ethereal in order to capture the complete essence of a locale. A master of light, color, and shadow, he became noted for creating highly ordered and complex scenes that often juxtaposed hazy or blurred elements with sharp and refined details to evoke an interweaving of both the physical and the spiritual nature of experience. In Inness's words, he attempted through his art to demonstrate the "reality of the unseen” and to connect the "visible upon the invisible."

Within his own lifetime, art critics hailed Inness as one of America's greatest artists. Often called "the father of American landscape painting," Inness is best known for his mature works that not only exemplified the Tonalist movement but also displayed an original and uniquely American style.

George Inness was born in Newburgh, New York. He was the fifth of thirteen children born to John William Inness, a farmer, and his wife, Clarissa Baldwin. His family moved to Newark, New Jersey when he was about five years of age. In 1839 he studied for several months with an itinerant painter, John Jesse Barker. In his teens, Inness worked as a map engraver in New York City. During this time he attracted the attention of French landscape painter Régis François Gignoux, with whom he subsequently studied. Throughout the mid-1840s he also attended classes at the National Academy of Design, and studied the work of Hudson River School artists Thomas Cole and Asher Durand; "If," Inness later recalled thinking, "these two can be combined, I will try." He debuted his work at the National Academy in 1844.

Inness opened his first studio in New York in 1848. In 1849, he married Delia Miller, who died a few months later. The next year he married Elizabeth Abigail Hart, with whom he would have six children.

In 1851 a patron named Ogden Haggerty sponsored Inness' first trip to Europe to paint and study. Inness spent fifteen months in Rome, where he studied landscapes by Claude Lorrain and Nicolas Poussin. He also rented a studio there above that of painter William Page, who likely introduced the artist to Swedenborgianism. He returned to America with his wife on the SS Great Britain in May 1852. In 1853 he was elected into the National Academy of Design as an Associate member and became a full Academician in 1868.

During trips to Paris in the early 1850s, Inness came under the influence of artists working in the Barbizon school of France. Barbizon landscapes were noted for their looser brushwork, darker palette, and emphasis on mood. Inness quickly became the leading American exponent of Barbizon-style painting, which he developed into a highly personal style. In 1854 his son George Inness, Jr., who also became a landscape painter of note, was born in Paris.

In the mid-1850s, Inness was commissioned by the Delaware, Lackawanna and Western Railroad to create paintings which documented the progress of DLWRR's growth in early Industrial America. The Lackawanna Valley, painted c. 1855, represents the railroad's first roundhouse at Scranton, Pennsylvania, and integrates technology and wilderness within an observed landscape; in time, not only would Inness shun the industrial presence in favor of bucolic or agrarian subjects, but he would produce much of his mature work in the studio, drawing on his visual memory to produce scenes that were often inspired by specific places, yet increasingly concerned with formal considerations.

Inness moved from New York City to Medfield, Massachusetts in 1860, where he converted a barn into a studio. In 1862–63, he was an art teacher to Charles Dormon Robinson. He then moved to Eagleswood, New Jersey in 1864. (See George Inness House.) He returned to Europe in the spring of 1870, living in Rome and touring Tivoli, Lake Albano, and Venice. In 1878, he returned to New York, taking a studio in the New York University Building. The same year, he also participated in the Universal Exposition in Paris, and published art criticism in the New York Evening Post and Harper's New Monthly Magazine.

His work of the 1860s and 1870s often tended toward the panoramic and picturesque, topped by cloud-laden and threatening skies, and included views of his native country (Autumn Oaks, 1878, Metropolitan Museum of Art; Catskill Mountains, 1870, Art Institute of Chicago), as well as scenes inspired by numerous travels overseas, especially to Italy and France (The Monk, 1873, Addison Gallery of American Art; Etretat, 1875, Wadsworth Atheneum). In terms of composition, precision of drawing, and the emotive use of color, these paintings placed Inness among the best and most successful landscape painters in America.

Inness built a home and studio at Tarpon Springs, Florida in 1877. He ignored the characteristic palm and painted the drab pine woods. His painting Early Morning – Tarpon Springs depicts this environment.

Eventually Inness' art evidenced the influence of the theology of Emanuel Swedenborg. Of particular interest to Inness was the notion that everything in nature had a correspondential relationship with something spiritual and so received an "influx" from God in order to continually exist. Another influence upon Inness' thinking was William James, also an adherent to Swedenborgianism. In particular, Inness was inspired by James' idea of consciousness as a "stream of thought", as well as his ideas concerning how mystical experience shapes one's perspective toward nature.

Inness was the subject of a major retrospective in 1884, organized by the American Art Association, which brought him acclaim in the United States. He earned international fame when he received a gold medal at the 1889 Paris Exposition.

After Inness settled in Montclair, New Jersey in 1885, and particularly in the last decade of his life, this mystical component manifested in his art through a more abstracted handling of shapes, softened edges, and saturated color (October, 1886, Los Angeles County Museum of Art), a profound and dramatic juxtaposition of sky and earth (Early Autumn, Montclair, 1888, Montclair Art Museum), an emphasis on the intimate landscape view (Sunset in the Woods, 1891, Corcoran Gallery of Art), and an increasingly personal, spontaneous, and often violent handling of paint. It is this last quality in particular which distinguishes Inness from those painters of like sympathies who are characterized as Luminists.

Inness died in 1894 at Bridge of Allan in Scotland. According to his son, he was viewing the sunset, when he threw up his hands into the air and exclaimed, "My God! oh, how beautiful!", fell to the ground, and died minutes later. A public funeral for Inness was held at the National Academy of Design, and a memorial exhibition was conducted at the Fine Arts Building in New York City.

Harvest Scene in the Delaware Valley (1867)

Dusk in the Rushes (Alexandria Bay)

On the Delaware River

The Home of the Heron

Approaching Storm from the Alban Hills (1871)