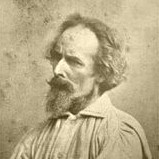 Frederic James Shields was a British artist, illustrator, and designer closely associated with the Pre-Raphaelites through Dante Gabriel Rossetti and Ford Madox Brown.

Frederic James Shields was born in Hartlepool on 14 March 1833, the eldest of four children of Georgiana Storey (d. 1853) a straw hat maker and John Shields (c.1808–1849) a bookbinder, stationer, and printer who ran a circulating library. Baptised Frederick, he later adopted the spelling Frederic.

The family moved to London in 1839 and Shields attended St Clement Danes parish school until he was fourteen. His father was a skilled draughtsman and gave Shields his first drawing lessons, and the boy went on to study engraving at evening classes at the London Mechanics' Institute, winning a drawing prize aged thirteen. In October 1847 he was apprenticed to a firm of lithographers. His father's business failed in 1848 and the family moved back north where Shields joined them.

He was brought up in extreme poverty, and as a young man was employed on hack-work for commercial engravers. He managed to study art briefly at evening classes in London and then in Manchester, where he settled in about 1848. He spent much of his artistic life in Manchester, and it was there that his drawings and watercolours were noticed and appreciated.

On 15 August 1874 in Manchester, Shields married Matilda Booth (b. 1856), known as Cissy, a young girl who used to be his model. Her family and Shields's friends had been concerned about the relationship between the 18 year old girl and forty one year old man but the marriage was considered surprising. Shields soon left for a trip to Europe and in 1875 left his new young wife at a boarding school in Brighton run by Margaret Alexis Bell and Mary Bradford. He had been a regular visitor to their previous school Winnington Hall with other Pre-Raphaelite artists.

Matilda's little sister Jessie (b. 1870) was adopted by the Shields family soon after their marriage and sent to school for several years. The marriage was not successful. They did not have children and much of the time lived separately, Cissy eventually leaving him in 1891.

Shields died on 26 February 1911 at Morayfield, Kingston Road, Merton, Surrey. He left an annuity to Cissy but the bulk of his fortune to missionary societies. He was buried in Merton Old Church, Merton, London SW19.