Frank Hartley Anderson was an architect, landscape architect and artist, and along with his wife, Martha, founded the Southern Printmaker's Society in 1935.

Anderson studied art and architecture at the Art Insitute of Chicago, the Cleveland School of Art and at Harvard University. He worked in the landscape architecture firms of Vincent Hubbard, George H. Miller and Warren Manning. It was through Miller that he assisted in the planning of Fairfield and through Manning that he co-authored the 1919 City Plan of Birmingham, which included a proposal by Anderson and William Warren to make Capitol Park into a municipal center. During this time, Anderson relocated to Birmingham and worked on other projects with Warren as well as taking commissions for residential projects on his own.

Early in his career, Anderson married the former Martha Fannin Fort of Georgia who had studied at the Boston Museum School and overseas and subsequently founded the art program at the University of Alabama. After moving to Birmingham, Martha continued as an art instructor under an extension program to train teachers in the Birmingham City Schools system. She also worked as an illustrator and portrait artist.

In 1924 Anderson completed construction of a hillside house on 11th Court South near Five Points which included separate studios for he and Martha. The house contained numerous technical innovations and employed a Mediterranean style with roof terraces and textured stucco walls unusual in Birmingham. His ground-floor studio included space for Anderson Galleries, through which he exhibited and sold his increasingly popular woodblock prints.

During the Great Depression the market for Anderson's architectural designs and artwork evaporated and in 1934 he signed up for the Public Works of Art Project (PWAP), part of President Franklin Roosevelt's "New Deal" of subsidized work programs. Frank and Martha Anderson jointly produced several woodcuts for public schools, often depicting historical scenes. They organized an exhibit of their prints alongside student works at the Birmingham Public Library in March 1935. That same year they both enlisted in the Federal Art Project under the Works Progress Administration and were commissioned to produce a mural of scenes of discovery for the Lakeview School and the "Spirit of Steel" for the Fairfield Post Office.

Also in 1935 the Andersons organized the Southern Printmakers Society in order to support the work of Southern artists and promote exhibits of printed works. He advertised the group in Art Digest and organized a touring exhibition which kicked off with the display of more than 200 selected works at the Birmingham Public Library. Artists shown included Rockwell Kent, John Stewart Curry, Reginald March and John Taylor Arms. By 1937 the society was sponsoring as many as 15 touring shows in the South and Midwest and was publishing fine editions of selected works for catalog sale. The first "presentation print" distributed to society members in appreciation for their support was the Andersons' "Church Supper". That image won the 1937 Edward S. Shorter Prize from the Southern States Art League and was shown at the Whitney Museum in New York and with an exhibition that toured Scandinavia. Copies were published by the National Museum of Stockholm and the New York Public Library.

Despite these successes, the Andersons lost their home in 1938 and moved to Atlanta, where Frank took a job with the Army Corps of Engineers. Before long they moved into Martha's parents home, "Mountain Hall" in Habersham County. They continued to cultivate the printmakers society and were among six of the group's artists invited to exhibit work at the Smithsonian Institution in 1940. They created an "Appalachian Museum of Art" and invited artists to join them at Mountain Hall, but were unable to realize plans for a full-fledged art center. Martha taught classes at Piedmont College and Frank entered the U. S. Army in 1942 as a captain and was assigned to Boca Raton, Florida. The activities of the Society tapered off during the war and ended with Anderson's death in 1947. 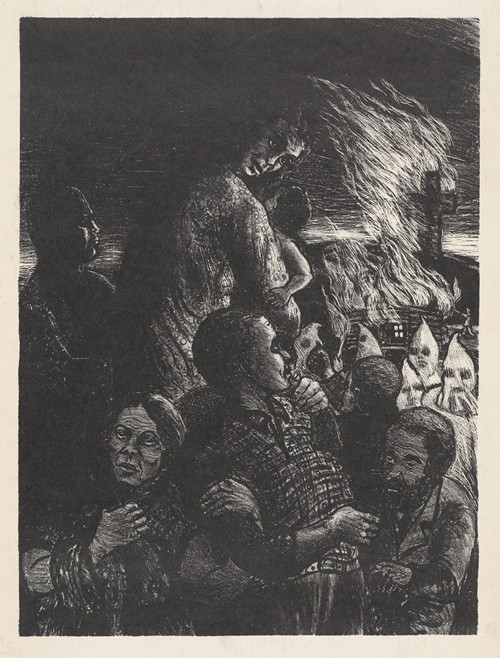