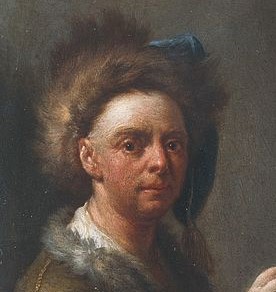 Francesco Trevisani was an Italian painter, active in the period called either early Rococo or late Baroque (barochetto).

Born in Capodistria, Istria (modern Koper now in Slovenia, then part of the Republic of Venice), he was the son of Antonio Trevisani, an architect, by whom he was instructed in the first rudiments of design. He then studied in Venice under Antonio Zanchi. He moved to Rome, where he remained until his death, in 1746. His brother, Angelo Trevisani remained a prominent painter in Venice.

In Rome, he was supported by Cardinal Pietro Ottoboni. He was strongly influenced by Carlo Maratta, as it is manifest in his masterpiece, the frescoes in San Silvestro in Capite (1695–1696). In this commission, he worked alongside Giuseppe Chiari and Ludovico Gimignani. In Rome, he was favored with the patronage of Cardinal Chigi. Chigi employed him in several considerable works, and recommended him to the protection of Pope Clement XI, who not only commissioned him to paint one of the prophets in San Giovanni Laterano, but engaged him to decorate the cupola of the cathedral in Urbino. There he represented, in fresco, allegories of the four Quarters of the World, in which he displayed much invention and ingenuity. He was employed by the Duke of Modena, in copying the works of Correggio and Parmigianino, and also painted in Brunswick, Madrid, Munich, Stockholm, and Vienna.

He also shows Maratta's influence in the cartoons for baptismal chapel in St. Peter's Basilica, in the oval with Prophet Baruch in San Giovanni in Laterano, and in the Death of St. Joseph in Sant'Ignazio. Trevisani painted scenes from the Life of the Blessed Lucy of Narni in the church of Narni (1714–15).

He also painted the huge canvas for the main altar of the Basilica of the Mafra National Palace in Portugal.

He became a member of the Academy of Arcadia in 1712. Among his pupils were Francesco Civalli of Perugia, Cav. Lodovico Mazzanti, and Giovanni Batista Bruglii.

The Martyrdom of the Seven Sons of Saint Felicity (1709)

Christ and the Samaritan Woman at the Well

Presentation Sketch for ‘The Holy Family with Saints Anne, Joachim, and John the Baptist’ (for Santa Maria in Via Lata, Roma) (c. 1729)

Saint Francis Praying Before A Crucifix By Candlelight

Saint Anthony Of Padua Preaching To The Fish

The Virgin and Child with the Infant Saint John the Baptist