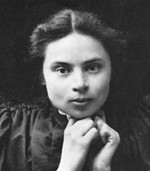 Ester Dorothea Almqvist was a Swedish artist who was a pioneer of Expressionist painting in Sweden.

Almqvist was born in Bromma but spent her childhood in Stockholm, where her parents taught in a school for Christian missionaries. She is the female artist who is represented with most artworks in the collections of Malmö Konstmuseum, a total of 2,083 pieces. She had specified in her will that her collection of oil and watercolour paintings, charcoal, pastel and ink drawings, graphic pages and sketchbooks should be donated to that particular museum. Her father, a priest, died when she was 9. Her mother worked as a private tutor and book seller for the sake of providing for her family. Almqvist was born with a deformed spine that limited her mobility throughout her life but also gave her freedom to study art instead of being confined to housework.

She attended the Technical School in Stockholm, graduating in 1891, and she studied art privately with the painter Gustaf Cederström. She continued her art studies at the Valand Art Academy in Gothenburg (1892–93) and then at the Artist League School in Stockholm (1894–95). Her teachers included Per Hasselberg and Bruno Liljefors. While in school, she supported herself by commercial book illustration work.

Almqvist spent most of her working life in Lund, and some of her best-known paintings are of the surrounding areas of Skåne province. She began exhibiting in the late 1890s and participated in the 1904 St. Louis World's Fair.

Almqvist's early work is Impressionist in style and conforms to what was then the prevailing mood of gentle melancholy in Swedish painting. After her mother's death she turned to Expressionism, and her mature paintings from about 1913 onward share a strong kinship with the work of Vincent van Gogh, featuring vigorous brushwork, strong colors, and heavy lines.

Almqvist belonged to a group of Swedish women artists who traveled, worked, exhibited, and sometimes lived together, including Tora Vega Holmström, Agnes Wieslander, and Maja Fjæstad. In her last year of life, when back pain made it impossible to work, a younger generation of women artists, such as Vera Nilsson, Mollie Faustman, and Siri Derket mounted an exhibition of her work in Stockholm honoring her as an early Swedish modernist. Broader recognition came only after her death in 1934, however. Another exhibit was organized in Lund at the Skånska Konstmuseum a year after she died by a friend Nils Gösta Sandblad. Four years after she died, a retrospective was held at the Galerie Moderne in Brussels. In Almqvist's will she insisted her artwork would be donated to the Malmö Art Museum. Her work is now in the collection of the Swedish National Museum, the Gothenburg Art Museum, the Malmö Art Museum, and other institutions, and she is widely recognized as a pioneer of Expressionism in Sweden.

In 1992, her painting entitled The Meeting (Swedish: Sammankomsten, 1929) was chosen for a Swedish postage stamp honoring Article 20 of the Universal Declaration of Human Rights, which protects freedom of association.

Her papers are held by Lund University.

A Farm House in Själland

Autumn Ploughing in the Marshland (1911)

Birch Grove after Sunset (before 1900)

Gothenburg Harbour with Boats in the Ice (1916)