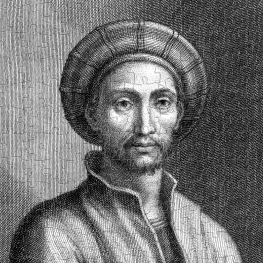 Domenico Puligo was an Italian painter of the Renaissance, active in Florence. His real name was Domenico di Bartolomeo Ubaldini.

He trained under Ridolfo Ghirlandaio and acted as an assistant to Andrea del Sarto, whom he also became close friends with. Both Ghirlandaio and Sarto exerted heavy influences over Puligo that are evident in his works and style of painting. Puglio was also influenced by Jacopo Pontormo and Il Rosso. He rose to success as a portrait artist and was in high demand in Florence. His most renowned piece is possibly the large scale Vision of Saint Bernard altarpiece, now located in the Walters Art Gallery in Baltimore. Some of his early works include the Virgin and Child with St. John as well as the Holy Family. About a dozen drawings are also attributed to Puligo but none relate to his surviving works or bear resemblance to the styles of his paintings. He is featured in Giorgio Vasari's Vite or Lives of the Artists. According to Vasari, Puligo was a particularly idle artist, which may explain the paucity of his productions. His brother, Jacone Puligo, was also a Renaissance painter.

Domenico Puligo came from a family of blacksmiths. His father, Bartolomeo, was a blacksmith and a descendant of the Ubaldini of Marradi in Tuscan Romagna, who were also blacksmiths. His mother was Apollonia, daughter of the goldsmith Antonio di Giovanni. Puligo also had a sister named Francesca. In the early 15th century, the Ubaldini family moved to the village of Ponte a Rifredi on the edge of Florence from their native area. Several years later, the family moved again to the Piazza di San Gallo, resting on the periphery of Porta San Gallo. Here the family lived in a small house that was part of the property of the Spedale di San Gallo.

The earliest record of Puligo is from 1504. Provided by his father to the Estimo del Contado in Florence, Bartolomeo stated that his son was twelve years old, which allowed it to be determined that Puligo was born in 1492. The second record after this initial one dates in 1525, 21 years later, when Puligo was aged 33. Two years later, in 1527, Puligo dies at the age of 35.

Between the second record in 1525 and Puligo's death in 1527, there is an increase in the records of Puligo's activity. Despite the fact that Puligo's name was only recorded in the record book 'Libro Rosso' of the Guild 'Compagnia de' pittori di San Luca', he would have likely completed his apprenticeship earlier and already became an independent master for numerous years, receiving commissions.

Puligo was trained under Ridolfo Ghirlandaio, the son of Domenico Ghirlandaio, who once trained Michelangelo as an apprentice. Puligo was one of the only two apprentices, the other being Antonio del Ceraiuolo, that continued to work with Ghirlandaio for many years, even after they had finished their apprenticeship. According to Vasari, Puligo and Ceraiuolo had received invitations to work in Span and Hungary, but were not enticed even by the guarantee of money and rejected the offers to remain in their own country, where there was still much to be done.

Vasari, who briefly worked in Sarto's workshop and likely came into contact with Puligo, notes Puligo's association with Sarto in his account of the life of Giovanni Francesco Rustici. Rustici and Puligo were two of the twelve men that belonged to the Compagnia di Paiuolo (Company of the Cauldron), which often occupied the Sapienza. It is suggested that this may have led to the meeting of Puligo and Sarto, since Sarto was a member of the Compagnia del Cazzuola, a larger group that was founded in 1512 which also frequented the Sapienza. If this was the case, then Puligo's relation to Sarto would date to the early 16th century.

Puligo married Felice di Francesco Silvani and had three children together, as recorded by Milanesi. The children were named Bartolomeo, Apollonia, and Margherita. Margherita and Bartolomeo both died as children, not long after their father's death. Apollonia was initially married to Filipo di Salvestro di Francesco Baldocci, but after his death she remarried to Amaddio Baccelli.

In September 1527, Puligo contracted the plague. Close to death, his will was drawn up by Andrea Rulli. Soon after, he died and was buried in Florence at San Lorenzo.

Holy Family, With The Madonna Supporting The Standing Christ Child On A Stone Ledge

Magdalene with the Jar of ointment (1525)